The show is similar in content to You've Been Framed! and America's Funniest Home Videos , which was also created by Vin Di Bona (which was based on Tokyo Broadcasting System's Fun TV with Kato-chan and Ken-chan ). The videos frequently feature slapstick and lowbrow humour such as people tripping over or animals behaving in amusing ways. Most videos are overdubbed with a voice-over and sound effects. In a deal with various foreign producers of similar shows, some imported clips are used, in exchange for home-grown videos from Australia.

Each new Australian video shown receives AU$500. At the end of each episode the audience watching at home can choose their favourite video of the night from a selection of 4, via telephone and SMS voting. The winning clip receives $10,000. At the end of each year there are semi finals and a grand final, where third place receives a home theatre package from JVC, second place receives a prize package worth around $100,000, normally two or three cars and the winner receives $250,000 in cash although in 2012, the winner received $150,000.

For most of the show's life, it has been a half-hour program on Tuesday at 7.30 pm. In mid 2000 the show moved to 6.30 pm Saturday, and in 2004, was extended to one hour, and now provides a fair amount of non-video content (e.g. End of Year Prize Ads), although the majority of content still comes from videos. In 2014, the show returned to its original half-hour format and airs on Saturday at 7.00 pm. In 2005, the show received a major revamp with a new set, logo and theme music, leaving behind the original internationally recognised look of The Video Show for a "futuristic" design with a brighter and more open set. Since then, the set has received both minor and major alterations, but still retains a bright and open appearance.

In 2013, the show switched from its regular seasonal broadcast to a "summer season" of repeats to allow for broadcasting of the recently introduced The Voice Australia .

On 28 February 1995, the show celebrated its 200th episode hosted by Jo Beth Taylor during an hour-long special which featured special guest appearances from America's Funniest Home Videos host at the time Bob Saget, Bernard Montiel & Alexandre Debanne from Video Gag via video message, as well as video messages from casts and hosts of other programs on the Nine Network congratulating the show's milestone. The shows anniversary special featured bloopers of former hosts Graham Kennedy, Jacki MacDonald & Lisa Patrick, also including The Channel Nine Marching Band conducted by Geoff Harvey performing the shows theme song in between each segment before and after the breaks.

In the summer of 1999, the show celebrated its 10th birthday, hosted by Kim Kilbey and featuring special guest Frank Bennett, to perform his single "Beautiful People" alongside the Sydney Children's Choir, who sang a special arrangement of the show's theme song along with Jo Beth Taylor. The show's anniversary special included a timeline of hosts; bloopers; fashion (of the female hosts); and interviews of former hosts Graham Kennedy, Jacki MacDonald, Lisa Patrick, Jo Beth Taylor, and Catriona Rowntree. This was also the last episode before moving to the Melbourne network and the inception of a new style for the following season in 2000.

On 31 December 2003, the show celebrated its 14th birthday, which included segments "As The Camera Rolls", where Toni is wearing a feather scarf and Bridge (Richard Wilkins) is wearing a pirate eye patch, an appearance by John Burgess of Burgo's Catch Phrase and videos from past grand final winners. Other features includes host bloopers, the introduction of the "Taped Crusader" character, and a videotaped message from former host Catriona Rowntree who paid homage to inaugural presenter Graham Kennedy. The 14th birthday special concluded with Mercury4 performing their hit single "Get Me Some" at the end of the show.

On 4 April 2009, it celebrated its 20th birthday; some of the features included the timeline of the openings, fashion (all female hosts), and additional features.

On 16 April 2011, the show celebrated its '21st' birthday and featured giveaways from JVC, timeline of the hosts, celebratory messages from Avril Lavigne, Short Stack, Alexis Jordan, Shane Warne and former host Kim Kilbey. Other features includes appearances by Julie Goodwin, Justice Crew, the cast of Hi-5 and a special visit from former host Toni Pearen. During the show Shelley Craft paid tribute to honour inaugural presenter Graham Kennedy who died in 2005. The '21st' birthday special concluded with Justice Crew performing their song 'Friday to Sunday' at the end of the show.

Australia's Funniest Home Videos: Daily Edition (also known simply as The Daily Edition) is a spin-off to Australia's Funniest Home Videos which first aired on the Nine Network from 30 November 2009 to December 2010 and later aired on GO! from 2011. It was a brief 30-minute version of the full show that would broadcast selected clips from the original show, and was hosted by then-current host of the original series Shelley Craft. The show was later cancelled in late-2012.

Australia's Naughtiest Home Videos is a controversial one-off special spin-off to Australia's Funniest Home Videos which aired on the Nine Network on 3 September 1992. It was a highly explicit special, depicting videos of sexual situations and other sexually explicit content, and was hosted by Australian radio personality Doug Mulray. It was planned to be a 60-minute broadcast, but due to complaints from both viewers and then-owner on the Nine Network Kerry Packer, was taken off the air part-way through the first and only episode, making it the only Australian television series to have done so. A copy of the full episode was later located at the Nine Network in 2008, after which the episode was edited to comply with new television standards and re-broadcast with commentary from Bert Newton at 8:30 PM on 28 August 2008, one week short of sixteen years after the original special, and at the same airing time.

America's Funniest Home Videos, also called America's Funniest Videos, is an American video clip television series on ABC, based on the Japanese variety show Fun TV with Kato-chan and Ken-chan. The show featured humorous homemade videos that are submitted by viewers. The most common videos feature unintentional physical comedy, pets or children and some staged pranks.

Toni Michelle Pearen, is an Australian actress, singer, songwriter and TV presenter. She initially became recognisable through her role on soap opera E Street from 1989 until 1992. She had a limited pop music career in the mid-1990s with the release of one album, Intimate, which provided two ARIA certified gold singles, "In Your Room" and "I Want You". She was host of Australia's Funniest Home Video Show from 2003 to 2007, and competed on the eighth season of Dancing with the Stars (2008).

The Don Lane Show is an Australian television talk show which aired twice a week on the Nine Network from 1975 to 1983. The show was created by Don Lane who co-hosted it with Bert Newton.

The World's Funniest! is an American reality show that aired on Fox in 1997. It was hosted by James Brown and announced by Mark Thompson. The show was similar in format to ABC's America's Funniest Home Videos, but also featuring funny clips from TV shows, bloopers, and funny TV commercials. Unlike AFHV, there was no contest element and viewer-submitted videos were not rewarded with prizes. It was also hosted without a studio audience, with laughter backing during clips coming via laugh track. 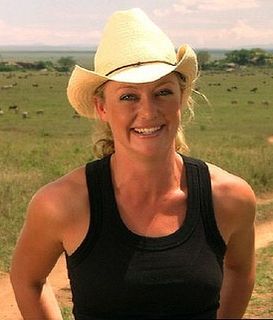 The year 2007 in Australian television was the 52nd year of continuous operation.

Lawrence Leung's Choose Your Own Adventure is a six-part Australian television comedy series, starring and primarily written by Melbourne comedian Lawrence Leung and produced by Chaser Broadcasting. The series was filmed over nine weeks from May 2008 in Sydney, Melbourne and Los Angeles, it depicts Leung setting out to achieve the dreams he had as a ten-year-old boy living in the 1980s. It premiered at 9:30 pm on 25 March 2009 on ABC1. The series aired in syndication in the United States under the title The Lost Adventures of Lawrence Leung on Vibrant TV Network.

The World's Funniest Moments is a reality television series produced by Associated Television International. Taped in front of a live audience, the show features humorous video clips taken from the Internet and submitted by viewers.

This is a list of Australian television events and premieres which occurred, or are scheduled to occur, in 2010. The year 2010 will be the 55th year of continuous operation of television in Australia.

Inside Story was an Australian current affairs television program airing weekly on the Nine Network. The program is hosted by Leila McKinnon and commenced on 26 February 2014. It screens Wednesday evenings normally at 8.45pm and Thursdays at 8:40 and 7:30.