In 1977, UNSW established the AGSM as New South Wales' second school of postgraduate management studies. [2] In January 1999, the AGSM and the Graduate School of Business of the University of Sydney merged under the AGSM brand. In November 2005, the universities demerged their business schools and the AGSM reverted to wholly UNSW ownership. [3]

One year later, UNSW merged the AGSM with the UNSW Faculty of Commerce and Economics, creating the Faculty of Business (later the Australian School of Business). [4]

In mid-2007, the faculties physically combined, and moved into UNSW's newly renovated Heffron Building, which UNSW renamed the Australian School of Business Building. [5]

The AGSM offers a full-time MBA program in Sydney which generally takes 12 months to complete. [7] Alternatively, students can complete one of two part-time MBAs - AGSM MBA (Executive) or the MBAX (where 'x' stands for a student's chosen specialisation), an AGSM Graduate Certificate. [8]

The UNSW Business School has over 83,000 Alumni. There are over 16,500 alumni of the AGSM MBA and MBT programs. [13] Notable alumni include:

The University of New South Wales(UNSW), also known as UNSW Sydney, is a public research university based in Sydney, New South Wales, Australia. It is one of the founding members of Group of Eight, a coalition of Australian research-intensive universities. 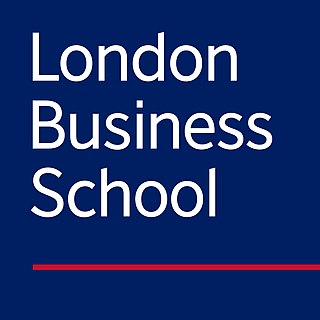 London Business School (LBS) is a business school and a constituent college of the federal University of London. LBS was founded in 1964 and awards post-graduate degrees. Its motto is "To have a profound impact on the way the world does business". LBS is consistently ranked amongst the world's best business schools.

The Kellogg School of Management at Northwestern University is the business school of Northwestern University, a private research university in Evanston, Illinois. Founded in 1908, Kellogg is one of the oldest and most prestigious business schools in the world. Its faculty, alumni, and students have made significant contributions to fields such as marketing, management sciences, and decision sciences.

The Tuck School of Business is the graduate business school of Dartmouth College, a private research university in Hanover, New Hampshire.

The Schulich School of Business is the business school of York University located in Toronto, Ontario, Canada. The institution provides undergraduate and graduate degree and diploma programs in business administration, finance, accounting, business analytics, public administration and international business as well as a number of PhD and executive programs. Originally known as the Faculty of Administrative Studies (FAS), it was renamed in 1995 after Seymour Schulich, a major benefactor who has donated $15 million to the school. Although the Schulich School of Business is a Faculty of York University, it operates under a separate budget. The Dean of the School, Detlev Zwick, was appointed in 2021 after having served as Interim Dean for 15 months.

The Samuel Curtis Johnson Graduate School of Management is the graduate business school in the SC Johnson College of Business at Cornell University, a private Ivy League university located in Ithaca, New York. It was founded in 1946 and renamed in 1984 after Samuel Curtis Johnson, founder of S.C. Johnson & Son, following his family's $20 million endowment gift to the school in his honor—at the time, the largest gift to any business school in the world.

The USC Marshall School of Business is the business school of the University of Southern California. It is accredited by the Association to Advance Collegiate Schools of Business.

The Smeal College of Business at the Pennsylvania State University offers undergraduate, graduate, and executive education programs to more than 6,000 students. Smeal, which is accredited by the Association to Advance Collegiate Schools of Business (AACSB), is home to more than 150 faculty members who teach and conduct academic research on a range of business topics. The college also features a network of industry-supported research centers.

The Louvain School of Management is the international business school of the University of Louvain (UCLouvain), Belgium, founded in 1897. The faculty offers courses on the campuses of Louvain-la-Neuve, UCLouvain FUCaM Mons and UCLouvain Charleroi.

The Vanderbilt University Owen Graduate School of Management is the graduate business school of Vanderbilt University in Nashville, Tennessee, United States. Founded in 1969, Owen awards six degrees: a standard 2-year Master of Business Administration (MBA), an Executive MBA, a Master of Finance, a Master of Accountancy, a Master of Accountancy-Valuation, and a Master of Management in Health Care, as well as a large variety of joint professional and MBA degree programs. Owen also offers non-degree programs for undergraduates and executives.

The University of Sydney Business School is the business school and a constituent body of the University of Sydney. It was established in January 2011 and formed from the School of Business within the previous Faculty of Economics and Business. The former combined faculty itself descended from the original Faculty of Economics founded in 1920, which was the first faculty of its kind in Australia. 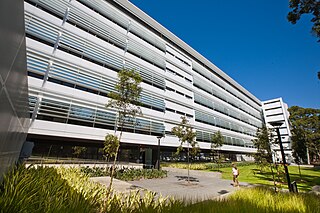 The UNSW Business School at the University of New South Wales is a business school located in Sydney, Australia. The school offers 42 programs, including 26 undergraduate and 26 specialist master's degrees, as well as six MBA and executive programs through the Australian Graduate School of Management.

Harvard Business School (HBS) is the graduate business school of Harvard University, a private research university in Boston, Massachusetts. It is consistently ranked among the top business schools in the world and offers a large full-time MBA program, management-related doctoral programs, and many executive education programs. It owns Harvard Business Publishing, which publishes business books, leadership articles, case studies, and the monthly Harvard Business Review. It is also home to the Baker Library/Bloomberg Center.

Cheung Kong Graduate School of Business (CKGSB) is a private, non-profit, independent educational institution and the only business school in China with faculty governance. The school offers MBA, Finance MBA, Executive MBA, Business Scholars Program, and short-term Executive Education programs to both Chinese and international students. The faculty staff is made up of 45 full-time professors and 10 long-term visiting professors currently, with research focusing from global business issues to China-specific topics. In its 10 years the school has trained about 3000 CEOs from various Chinese companies, with notable alumni including the founder of the Alibaba Group, Jack Ma; Fu Chengyu, Chairman of Sinopec; and Wu Yajun, the fifth richest person and the richest woman in China as of 2012.

Tsinghua University School of Economics and Management, is the business school of Tsinghua University in Beijing, China. The school offers undergraduate, master, doctoral, and many executive education programs, with a total enrollment of more than 3,000 students.

EU Business School is a private business school with campuses in Geneva and Montreux (Switzerland), Barcelona (Spain), and Munich (Germany). It is a part of OMNES Education since 2022.

The Stephen M. Ross School of Business, also known as Michigan Ross, is the business school of the University of Michigan. It is ranked among the best business schools in the world by The Economist, Financial Times, QS World University Rankings, U.S. News & World Report, and Bloomberg Businessweek.