The B Line, also known as the Northwest Rail Line during construction, is a commuter rail line which is part of the commuter and light rail system operated by the Regional Transportation District in the Denver metropolitan area in Colorado. [2] Part of the FasTracks project, the first 6.2-mile (10 km) section from downtown Denver to south Westminster opened on July 25, 2016. [3] If fully built out, estimated around 2042, [4] the B Line will be a 41-mile (66 km) high-capacity route from Denver Union Station to Longmont, passing through North Denver, Adams County, Westminster, Broomfield, Louisville and Boulder. [2]

The B Line's southern terminus is at Union Station in Denver. It runs on a railroad right-of-way north sharing track with the G Line until Pecos Junction station, after which the two routes diverge. Initially, the B Line continues north to its terminus at Westminster station; [5] this is completed in approximately 15 minutes.

In 2004, Colorado voters approved FasTracks, a multibillion-dollar public transportation expansion plan. As part of the Eagle P3 project, the first segment of the B Line opened on July 25, 2016. The remaining segment, extending to downtown Longmont, will require additional funding [6] in order to be completed prior to 2042. [4] The announcement angered many voters in the cities and suburbs north of Denver, who had approved a sales tax increase in 2004 to fund the FasTracks project. [7] [8] [4]

The downturn in the economy, poor cost projections that significantly underestimated construction costs and other reasons led to the initiation of the year-long "Northwest Area Mobility Study" for what was then known as the Northwest Rail line. Out of this study came an agreement between northwest area governments and transportation partners to build a line very different from what the lines voters originally approved. The study concluded in 2014. It made a number of recommendations that were adopted by the RTD. [9] [10] [11] [12] [13]

In summer 2018, the U.S. 36 Mayors and Commissioners Coalition was gathering support from other members to ask RTD to provide an estimate for at least weekday rush hour commuter rail service along the original corridor to Longmont. [14] In spring 2019, Longmont City Council asked RTD to look into the barebones "Peak Service Plan". RTD estimated a start-up cost of $117 million, serving an initial weekday ridership of 1,400. By mid-2019, completion of the full original line was estimated at $1.1-1.5 billion (in 2013 dollars), targeted for 2042, 25 years after the original planned opening. [15] In early 2020, RTD estimated it could construct the rest of the line for peak-direction service at a cost of $700-800 million; full-day service would not be expected until 2050 at a final cost of $1.5 billion. [4] 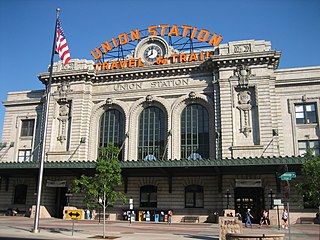 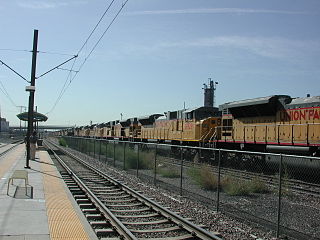 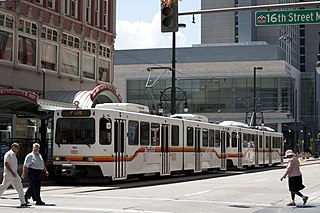 The F Line, part of the light rail system operated by the Regional Transportation District in the Denver metropolitan area in Colorado, was added to the system on November 17, 2006, as part of the Southeast Corridor project. It is one of four routes that are part of the RTD's service plan for the corridor. It operates Monday through Friday and does not run on weekends, Thanksgiving and Christmas days. 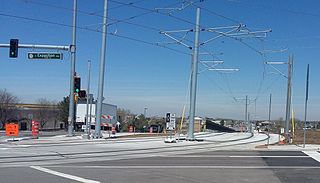 The H Line, part of the light rail system operated by the Regional Transportation District in the Denver-Aurora Metropolitan Area in Colorado, was added to the system on November 17, 2006, with the completion of the Southeast Corridor project. It is one of four routes that are part of the RTD's service plan for the corridor. 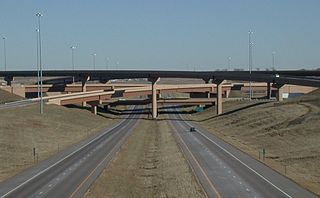 The A Line, officially called the University of Colorado A Line for sponsorship reasons, is a Regional Transportation District (RTD) commuter rail line serving Denver and Aurora, Colorado, operating between Downtown Denver and Denver International Airport (DIA). During planning and construction the A Line was also known as the East Rail Line, which it is now infrequently called. Most locals refer to it as simply the A Line. Despite its official title, the line does not serve the campuses of the University of Colorado. 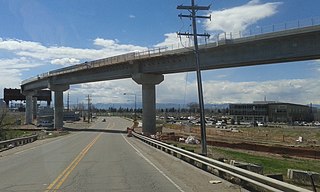 Peoria station, also known as Peoria/Smith station, is a Regional Transportation District (RTD) station in Aurora, Colorado. The station is served by the A Line, a commuter rail line from Union Station in Downtown Denver to Denver International Airport, and the R Line, a light rail line crossing through Aurora and South to Lone Tree. A Line travel times from the station to Downtown Denver and Denver International Airport are about 17 and 20 minutes, respectively. Peoria station is the northern terminus of the R Line with a travel time of 58 minutes to the southern terminus at Lincoln station.

Westminster is a Regional Transportation District (RTD) commuter rail station on the B Line in Westminster, Colorado, part of the Denver metropolitan area. The station opened on July 25, 2016, and became the interim northern terminus of the B Line until extensions north toward Boulder and Longmont are built. From Westminster, B Line trains travel 6 miles (9.7 km) south to Union Station in Denver, taking about 11 minutes. 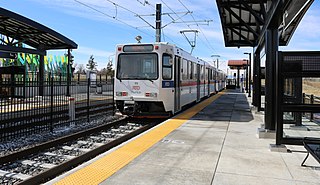 Fitzsimons station is a Regional Transportation District (RTD) light rail station on the R Line in Aurora, Colorado. The station is located along the north side of Fitzsimons Parkway along Sand Creek Park and serves the University of Colorado Anschutz Medical Campus via a free shuttle bus.

Template:Attached KML/B Line (RTD)
KML is from Wikidata
This page is based on this Wikipedia article
Text is available under the CC BY-SA 4.0 license; additional terms may apply.
Images, videos and audio are available under their respective licenses.