Bandhanam (English: Bondage) is a 1978 Indian Malayalam film, directed by M. T. Vasudevan Nair and produced by V. B. K. Menon. The film stars Shobha, Sukumaran, Sankaradi and Shubha in the lead roles. The film has musical score by M. B. Sreenivasan. [1] [2] [3] The film observes a young man's return from city living to the village. The film's mood is sorrowful. He leads a very wayward life and tries not to get himself attached to family ties but eventually gets drawn into the bondage of relationships and family by his step sister.

The title of the film literally translates to "bondage". The title is taken from a short story of the same name by MT although the film is not an adaptation the story.

Unnikrishnan (Sukumaran) works as clerk in the city. He leads an aimless life spending his evenings drinking and nights in a budget lodge. His colleague Sarojini (Shubha) has feelings for Unnikrishnan. Though Unnikrishnan reciprocates the feelings, he fails to express it to her.

Unnikrishnan receives a mail from his estranged stepmother which prompts Unnikrishnan to take a month leave and go back to his village. He meets his stepmother and half sister Thankam (Shobha), who are financially struggling. Unnikrishnan arranges a suitable wedding for Thankam. After the wedding, he decides to go back to the city and propose to Sarojini, but he receives Sarojini's wedding invitation at the same time. The story ends with Unnikrishnan deciding to continue his lonely life.

The music was composed by M. B. Sreenivasan and the lyrics was written by O. N. V. Kurup. 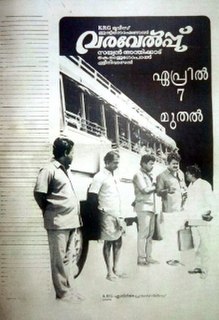 Classmates is a 2006 Indian Malayalam-language coming-of-age romantic film directed by Lal Jose and written by James Albert. The film stars Prithviraj Sukumaran, Narain, Jayasurya, Indrajith Sukumaran and Kavya Madhavan with Jagathy Sreekumar, Balachandra Menon and Radhika in supporting roles. The music was composed by Alex Paul. The cinematography was by Rajeev Ravi and editing by Ranjan Abraham. Audiography was done by M. R. Rajakrishnan.

Vaasthavam (transl. Fact) is a 2006 Indian Malayalam-language Romantic political crime thriller film written by Babu Janardhanan and directed by M. Padmakumar. The film revolves around a youth Balachandran Adiga and follows his rise and fall in politics. The story is loosely based on Thakazhi's novel Enippadikal.

Kanyakumari is a 1974 Indian Malayalam-language film written by M. T. Vasudevan Nair and directed by K. S. Sethumadhavan. It stars Kamal Haasan in the lead role of the protagonist and Rita Bhaduri in the female lead. The film deals with the a man who makes sculptures where he meets a girl who sells bangles and pearls on the sea shore and falls in love with him. 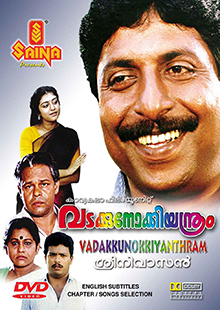 Vadakkunokkiyantram (transl. Compass) is a 1989 Indian Malayalam-language dark comedy film written and directed by Sreenivasan who also stars in the film along with Parvathy. The film is about the marital discord caused by a husband's othello syndrome. The film won three Kerala State Film Awards, including Best Film. It was dubbed in Telugu as Sandeham and remade in Tamil as Dindigul Sarathy, in Kannada as Nanjangudu Nanjunda, and in Hindi as Main, Meri Patni Aur Woh.

Mazha Peyyunnu Maddalam Kottunnu is a 1986 Indian Malayalam-language comedy film directed by Priyadarshan and written by Sreenivasan from a story by Jagadish. It stars an ensemble cast led by Mohanlal, Mukesh, Sreenivasan, Jagathi Sreekumar, Maniyanpilla Raju ,Kuthiravattam Pappu and Lizy. Mammootty appears in a brief cameo role. The film was one of the highest-grossing Malayalam films of the year. It is now considered as one of the best comedy films in Malayalam cinema. The film was remade in Telugu as Saradaga Kasepu.

Pingami is a 1994 Indian Malayalam-language action thriller film directed by Sathyan Anthikkad and written by Reghunath Paleri based on his own short story Kumarettan Parayaatha Kadha. It was produced by Mohanlal through the company Pranavam Arts, and stars himself along with Thilakan, Kanaka, and Jagathy Sreekumar. The music was composed by Johnson. 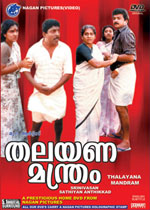 Thalayana Manthram is a 1990 Indian Malayalam film directed by Sathyan Anthikkad and written by Sreenivasan. The film stars Sreenivasan, Urvashi, Jayaram, and Parvathy. Urvashi's performance as Kanchana received widespread acclaim and is considered one of the best in her career.

Aayushkalam (transl. Lifetime) is a 1992 Indian Malayalam-language ghost film directed by Kamal and written by Vinu Kiriyath and Rajan Kiriyath. Starring Jayaram, Mukesh, Sreenivasan, Sai Kumar and Gavin Packard. The film was a commercial success at the box office. Aayushkalam is based on the Hollywood film Ghost and was in turn remade in Hindi as Hello Brother.

Shaalini Ente Koottukaari is a 1980 Indian Malayalam film, written by Padmarajan and directed by Mohan. The film is loosely based on a story of Padmarajan named "Parvathikutty". The film stars Shobha, Jalaja, Sukumaran and Venu Nagavalli in the lead roles. The film has musical score by G. Devarajan. The movie is about the friendship between two young girls named Shalini and Ammu. Shobha's suicide was then when the movie was running successfully in the box office. The film was remade in Tamil as Sujatha (1980).

Kinnaram is a Malayalam comedy film released in 1983. Sukumaran, Nedumudi Venu, Jagathi Sreekumar, Poornima Jayaram, Sukumari and Sankaradi appear in the main roles. Directed by Sathyan Anthikkad, this film is the story of two bachelor friends who fall in love with the same girl. Mammootty appears in just one scene in this film.

Pavam Pavam Rajakumaran is a 1990 Malayalam film directed by Kamal and written by Sreenivasan. The film is based on the short story Kottu Baakki by S. K. Pottekkad. This film stars Sreenivasan, Rekha, Siddique, Kottayam Santha, Jagadish and Maniyanpilla Raju. Jayaram appears in an extended guest role in the film, which was a huge hit at the box office. The sub-plots of the movie were used in the 1991 Tamil movie Gopura Vasalile. 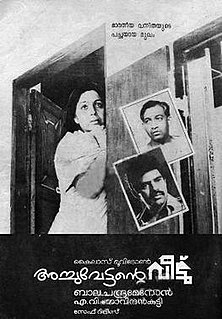 Jagadguru Aadisankaran is a 1977 Indian Malayalam film, directed and produced by P. Bhaskaran. The film stars Muralimohan, Kaviyoor Ponnamma, O. Ramdas and Sankaradi in the lead roles. The story revolves around the life, philosophies and miracles of 8th century saint Adi Shankara.

Orikkal Koodi is a 1981 Indian Malayalam-language film, directed by I. V. Sasi and produced by S. R. Shaji. The film stars Madhu, Sukumaran, Kaviyoor Ponnamma and Lakshmi in the lead roles. background music was by Shyam.