The Battle of Wilhelmsthal (sometimes written as the Battle of Wilhelmstadt) was fought on 24 June 1762 during the Seven Years' War between on one side the allied forces of British, Prussian, Hanover, Brunswick and Hessian troops under the command of the Duke of Brunswick against the French. Once again, the French threatened Hanover, so the Allies manoeuvered around the French, surrounded the invasion force, and forced them to retreat. It was the last major action fought by Brunswick's force before the Peace of Paris brought an end to the war.

The Seven Years' War was a global conflict fought between 1756 and 1763. It involved every European great power of the time and spanned five continents, affecting Europe, the Americas, West Africa, India, and the Philippines. The conflict split Europe into two coalitions, led by the Kingdom of Great Britain on one side and the Kingdom of France, the Russian Empire, the Kingdom of Spain, and the Swedish Empire on the other. Meanwhile, in India, some regional polities within the increasingly fragmented Mughal Empire, with the support of the French, tried to crush a British attempt to conquer Bengal. The war's extent has led some historians to describe it as "World War Zero", similar in scale to other world wars.

France had made a number of attempts to invade and overrun Hanover since 1757, hoping to occupy the Electorate and use it as a bargaining counter to exchange for the return of French colonies captured by the British. The Allied army under the Duke of Brunswick had prevented them from taking Hanover - and by 1762, aware that the war was likely to draw to a close, the French had decided on a final thrust to try to defeat Brunswick and occupy Hanover.

Ferdinand had advanced and outflanked the French on both flanks, nearly encircling them. An attack on the French center held by Stainville's command was particularly effective, with one column engaging his front, another striking his rear, inflicting some 900 casualties [2] and forcing 2,700 to surrender. [3]

The result is viewed as victory for the Allied forces. It ended the last French hopes of overrunning and occupying Hanover before the armistice that ended the war, and the Treaty of Paris. The Anglo-German forces advanced and captured Cassel in November, but by then the preliminaries of peace had been signed. 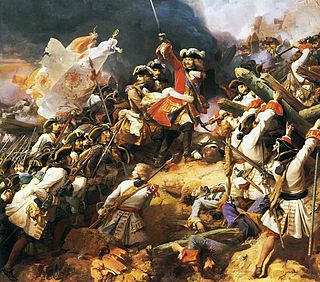 The Battle of Denain was fought on 24 July 1712, as part of the War of the Spanish Succession. It resulted in a French victory under Marshal Villars against Dutch and Austrian forces under Prince Eugene of Savoy.

The Battle of Malplaquet was a battle of the War of the Spanish Succession, fought on 11 September 1709, which opposed the Bourbons of France and Spain against an alliance whose major members were the Habsburg Monarchy, the United Provinces, Great Britain and the Kingdom of Prussia. 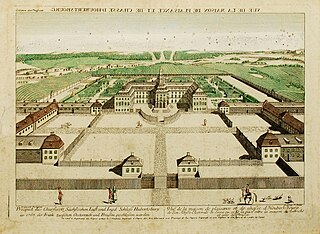 The Treaty of Hubertusburg was signed on 15 February 1763 at Hubertusburg Castle by Prussia, Austria and Saxony to end the Third Silesian War. Together with the Treaty of Paris, signed five days earlier, it marked the end of the Seven Years' War. The treaty ended the continental conflict with no significant changes in prewar borders. Austria and Saxony renounced all claims to the Silesian territories ceded to Prussia in the 1742 Treaty of Berlin and the 1745 Treaty of Dresden. Prussia clearly stood among the ranks of the European great powers, while the treaty enhanced the rivalry with Austria.

The Battle of Breslau was a battle fought on 22 November 1757 during the Third Silesian War. A Prussian army of 28,000 men fought an Austrian army of 84,000 men. The Prussians held off the Austrian attack, losing 6,000 men to the Austrians 5,000 men. But one day later the Prussians beat a retreat. Breslau's garrison surrendered on 25 November 1757. 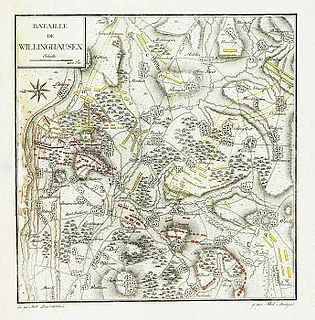 The Battle of Villinghausen was a battle in the Seven Years' War fought on the 15th and 16 July 1761 in the western area of present-day Germany, between a large French army and a combined Prussian-Hanoverian-British force led by Prince Ferdinand of Brunswick.

Ferdinand, Prince of Brunswick-Lüneburg, was a German-Prussian field marshal (1758–1766) known for his participation in the Seven Years' War. From 1757 to 1762 he led an Anglo-German army in Western Germany which successfully repelled French attempts to occupy Hanover. 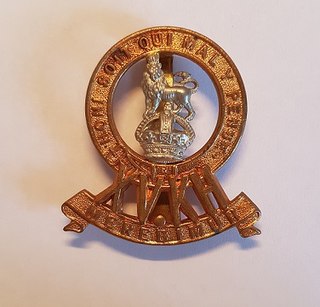 The Battle of Kloster Kampen was a tactical French victory over a British and allied army in the Seven Years' War. The Allied forces were driven from the field.

The Battle of Emsdorf was fought on 16 July 1760 during the Seven Years' War at Emsdorf in present-day Hesse, Germany, between forces of British, Hanoverian and Hessian troops under the Prince of Hesse-Kassel against German troops in French service under Marechal de Camp von Glaubitz. It was part of the campaign to disrupt the French line of communications by capturing Marburg, a French supply depot.

The Battle of Corbach, or Korbach, a Hanseatic town of Waldeck-Frankenberg in northern Hesse, Germany, was fought on 10 July 1760 during the Seven Years' War. Corbach was the first battle of the campaign of 1760 and was a victory for the French over the Hanoverians, the British and their allies.

The Raid on Cherbourg took place in August 1758 during the Seven Years' War when a British force was landed on the coast of France by the Royal Navy with the intention of attacking the town of Cherbourg as part of the British government's policy of "descents" on the French coasts.

Great Britain was one of the major participants in the Seven Years' War which lasted between 1754 and 1763, although warfare in the European Theatre involving countries other than Britain and France only commenced in 1756. Britain emerged from the war as the world's leading colonial power, having gained a number of new territories at the Treaty of Paris in 1763 and established itself as the world's pre-eminent naval power.

The Annus Mirabilis of 1759 was a string of notable British victories over French-led opponents during the Seven Years' War. 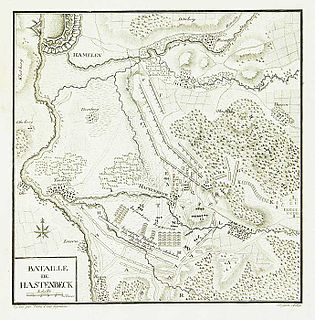 The Invasion of Hanover took place in 1757 during the Seven Years' War when a French army under Louis Charles César Le Tellier, duc d'Estrées advanced into the Electorate of Hanover and neighbouring German states following the Battle of Hastenbeck. French forces overran most of Hanover forcing the Hanoverian Army of Observation, intended to defend the Electorate, to Stade on the North Sea coast. At the Convention of Klosterzeven the Duke of Cumberland agreed to disband his army and acknowledge the French occupation of the Electorate. 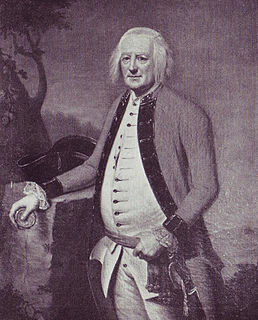 August Friedrich von Spörcken (1698–1776) was a Hanoverian soldier best known for his service in the Seven Years' War. He served as part of the Army of Observation between 1757-1762 leading the Hanoverian contingent at a number of major battles including Krefeld and Minden.

Monastir Offensive was an Allied military operation against the forces of the Central Powers during World War I, intended to break the deadlock on the Macedonian Front by forcing the capitulation of Bulgaria and relieving the pressure on Romania. The offensive took the shape of a large battle and lasted for three months and ended with the capture of the town of Monastir. On an average depth of 50 kilometers the Bulgarian First Army gave battle on six occasions and was forced to retreat five times.