Beach polo is a team sport and close variant of arena polo.

A game of beach polo consists of two three-player teams as opposed to the usual four-player teams in field polo. A game consists of four seven-minute periods of play, called chukkers. The game is played in an enclosed sand arena with sideboards of approximately four feet in height, designed to keep the ball in play. Depending on playing areas available, some of the playing arenas have enclosed ends while others allow for 20 yards of run out room for the horses, past the end line, and utilize standing goal posts.

Two umpires are suggested for tournament play which may be stationed outside the arena to officiate the game. Penalties are called and resulting free hits are awarded to the fouled party.

Unlike the hard plastic ball used in field polo, beach polo employs a leather or rubber inflated ball no less than 12.5 inches in circumference. Other equipment employed is the same as that used in field or arena polo.

Reto Gaudenzi and Rashid Al Habtoor have been credited with the creation of the game in 2004 in Dubai, followed by the Miami Beach Polo World Cup in the United States in 2005 which also was created by Reto Gaudenzi and his son Tito. Reto Gaudenzi is also the inventor of Snow Polo that initiated in 1985 on the frozen lake of St. Moritz. Additional tournaments matches have arisen in Argentina, Australia, Austria, Belgium, Chile, China, Colombia, Croatia, England, France, Germany, India, Italy, Mexico, New Zealand, Poland, Spain, Thailand, The Netherlands, Uruguay and Wales.

The most notable event of this kind continues to take place annually in Miami Beach. Having featured some of the best international polo players include Argentine 10-goaler Gonzalo Pieres, 8-goaler Alejandro Novillo Astrada, Mexico's late Carlos Gracida (9), USA's 9-goaler Nic Roldan amongst many more. This event is organized by Tito Gaudenzi and Melissa Ganzi to this day.

Buzkashi is a Central Asian sport in which horse-mounted players attempt to place a goat or calf carcass in a goal. Similar games are known as kokpar, kupkari, and ulak tartysh in Kyrgyzstan and Kazakhstan, and as kökbörü and gökbörü in Turkey, where it is played mainly by communities originally from Central Asia. 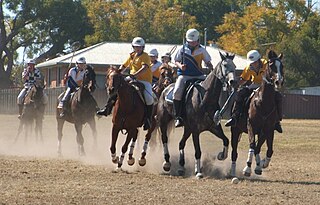 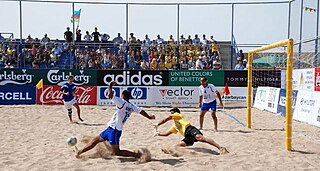 Beach soccer, also known as beach football, sand football or beasal, is a variant of association football played on a beach or some form of sand. The game emphasises skill, agility and accuracy in shooting at the goal.

Adolfo Cambiaso is an Argentine professional polo player with a 10-goal handicap rating. He is currently ranked number one in the world. 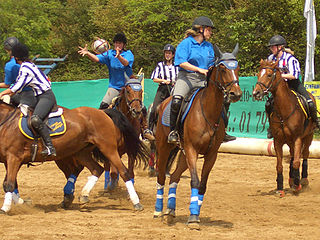 Horseball is a game played on horseback where a ball is handled and points are scored by shooting it through a hoop with a diameter of 1m. The sport is like a combination of polo, rugby, and basketball. It is one of the ten disciplines officially recognized by the International Federation for Equestrian Sports. 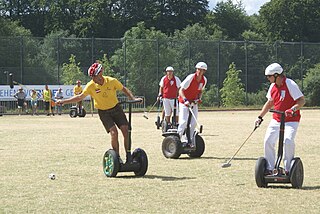 The World Polo Championship is a polo competition between countries. The event is organised by the sport's governing body, the Federation of International Polo (FIP), and is contested by the national teams. There is no restriction on the gender of the players. The inaugural tournament was held in 1987, hosted by Argentina, and is now contested every three or four years.

Mariano Aguerre, is a professional polo player in Argentina and the United States. He achieved a 10-goal handicap in the United States in 1994 and in Argentina in 1998. He is currently rated at 9 goals in both countries. He is a nine-time winner of the Argentine Open at Palermo, winning with three different teams: Ellerstina, Chapa I and La Dolfina. The Museum of Polo and Hall of Fame announced that Mariano was inducted into the Hall of Fame in 2017.

The International Polo Club Palm Beach, located in Wellington, Florida, is one of the largest polo clubs in the world. The club includes several natural grass polo fields, two of which are part of stadiums.

Arena polo is a fast-paced version of polo played outdoors on an enclosed all-weather surface, or in an indoor arena. Hurlingham Polo Association and US Polo Association have established their own rules for arena polo, and these rules are often used in other countries as well. 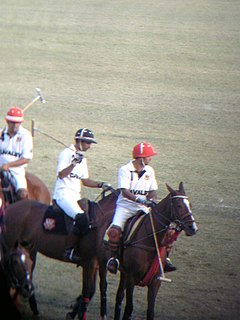 Automobile polo or auto polo was a motorsport invented in the United States with rules and equipment similar to equestrian polo but using automobiles instead of horses. The sport was popular at fairs, exhibitions and sports venues across the United States and several areas in Europe from 1911 until the late 1920s; it was, however, dangerous and carried the risk of injury and death to the participants and spectators, and expensive damage to vehicles.

The sport of polo is played in the United Arab Emirates (UAE). 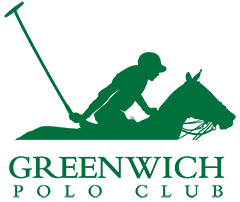 Greenwich Polo Club is a polo club and event venue in Greenwich, Connecticut that was established in 1981. It is one of only three polo venues in the United States offering high-goal polo. The club hosts high goal polo matches throughout the summer, tournaments typically beginning in June and concluding in September.