Benjamin Edward Stephen Adams (born 22 November 1981) is an English singer and songwriter, best known as a member of the boy band A1 (band).

Born in Ascot, Berkshire, Adams attended Westminster Under School, where he became head chorister of the school choir. He later attended Bedales School, leaving aged 16 after completing his GCSEs to join Charterhouse School. [1]

Adams was a member of four-piece boyband a1, who won a BRIT Award in 2001 for Best Newcomer and had two number one singles, "Take On Me" (the chart-topping song that was originally made famous by and written by the Norwegian band a-ha) and "Same Old Brand New You", before separating in 2002. [2] Whilst in the boyband, Adams also scooped a Smash Hits Poll Winners Party Award for Most Fanciable Male in 2001.

It was announced in 2009 that a1 were to reform to compete to represent Norway in the 2010 Eurovision Song Contest. [3] a1 then resigned with Universal Music Group and recorded another two studio albums "Waiting For Daylight" and "Rediscovered", which Adams co-wrote and produced. In 2013, a1 participated in The Big Reunion. In 2018, the band celebrated their 20th anniversary with an international tour.

After a couple of years writing, Adams made a comeback with a new solo recording contract with BMG Records. His first solo single, "Sorry", reached No. 18 on the UK Singles Chart in June 2005. [4] As well as writing for himself, Adams began writing and producing for the likes of Robin Thicke, Craig David, JLS, Sam Bailey, Amelia Lily, Markus Feehily, Union J and Alexandra Burke to name but a few. Adams also co-wrote the Lisa Scott-Lee single "Electric" with Guy Chambers, as well as a song called "Get Off My Girl" with Har Mar Superstar.

Adams has his own recording studio situated in London called Archer Studios previously known as Parkbench Studios. [5] Having been the creative director behind the bands Kissing Freddie, [6] What Jane Did Next (which Adams is a part of) and MEOW. When he entered the Celebrity Big Brother house in 2009, it was revealed that Adams had worked on songs for X Factor winner, Alexandra Burke.

In 2017 Ben announced plans to release second recorded album "1981" and has continued to release a steady stream of singles presumably from the album. No release date has been announced as of June 2020.

In 2009, Adams was a participant on the sixth series of the reality TV series Celebrity Big Brother , and reached the finale finishing in fifth place after the public vote, behind Coolio, Verne Troyer, Terry Christian and eventual winner Ulrika Jonsson.

In 2012, Adams took part in Skal Vi Danse , the Norwegian version of Strictly Come Dancing / Dancing with the Stars on TV2 Norway. His dance partner was Tone Jacobsen. He placed second.

In October 2017 Ben took a leading role in the touring version of Flashdance the Musical, starring as Nick Hurley alongside Joanne Clifton.

Adams co-wrote with Chris Wilkins a new original musical called Eugenius! which premiered as a concert performance on 29 July 2016 at the London Palladium, which was produced by Warwick Davis (who also starred in the concert). The musical received its fully staged premiere at The Other Palace from 22 January to 3 March 2018 and returning from 1 September to 7 October 2018.

A1 are a British-Norwegian boy band that formed in 1998. The original line-up consists of Paul Marazzi, Christian Ingebrigtsen, Mark Read and Ben Adams. Ingebrigtsen is originally from Oslo, Norway, but the other members originate from London.

Frederick James Perren was an American songwriter, record producer, arranger, and orchestra conductor. He co-wrote and co-produced songs including "Boogie Fever" by the Sylvers, "I Will Survive" by Gloria Gaynor, and "Shake Your Groove Thing" by Peaches & Herb.

Christian Ingebrigtsen is a Norwegian singer-songwriter and musician. He is a member of the British–Norwegian pop group A1.

Dax O'Callaghan is an English singer, dancer and actor. Once referred to as the Prince of Pop in France during the success of his debut single in the early 2000s, Dax is recognized throughout many European territories as a successful entertainer through his accomplishments in music on the European Pop Charts. 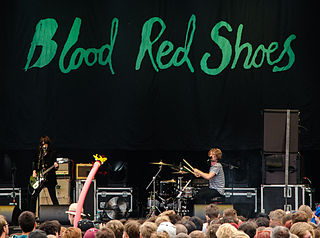 Blood Red Shoes are an English alternative rock duo from Brighton consisting of Laura-Mary Carter and Steven Ansell. They have released five full-length albums, Box of Secrets (2008), Fire Like This (2010), In Time to Voices (2012), Blood Red Shoes (2014) and Get Tragic (2019) as well as several EPs and a number of singles. In 2014, they founded their own label, Jazz Life. 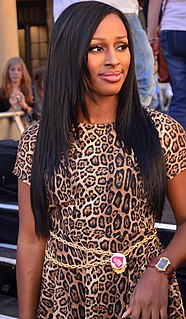 Alexandra Imelda Cecelia Ewen Burke is an British singer, songwriter and actress. She won the fifth series of the British television series The X Factor in 2008, and has been signed to Epic Records, RCA Records and Syco Music. 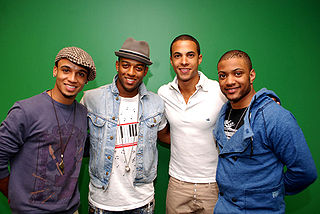 JLS are an African pop/R&B group, which consists of members Aston Merrygold, Oritsé Williams, Marvin Humes, and JB Gill, originally formed by Williams. They initially signed to Tracklacers production company New Track City and then went on to become runners-up of the fifth series of the ITV reality talent show The X Factor in 2008, coming second to Alexandra Burke. Following their appearance on The X Factor, JLS signed to Epic Records. Their first two singles "Beat Again" and "Everybody in Love" both went to number one on the UK Singles Chart.

Paul Thomas Leo Marazzi is a British musician. He is founder of boy band A1.

"Bad Boys" is a song by British recording artist Alexandra Burke. The song is her second single after winning the fifth series of The X Factor, and the lead single from her debut album, Overcome. The song features American rapper Flo Rida. It was written by Mark Fowler, Laura Senior, Flo Rida, Melvin K. Watson Jr, Larry Summerville Jr., busbee, Lauren Evans, Alex James, and was produced by The Phantom Boyz. It was first released for digital download on 12 October 2009. The song is an uptempo electrohop song, lyrically about becoming attracted to dangerous men.

Overcome is the debut studio album by British singer Alexandra Burke, released 19 October 2009 on Syco Music. The release of the album came a year after Burke won the British talent show, The X Factor, with the recording process taking place between 2008 and 2009. Critics praised the album for showcasing Burke's vocal charm and characterisation, comparing her vocal to American singers Anastacia and Whitney Houston and its contemporary finish; using a variety of acclaimed producers including RedOne and Ne-Yo.

"Everybody in Love" is a song by English boyband JLS from their self-titled debut album (2009). The song was released as a digital download on 1 November 2009, followed by a physical release the following day. The song became the band's second number one single in the UK on 8 November 2009, with a total of 600,000 copies being sold so far in the UK, earning the single a Platinum certification. The song was released to U.S. Mainstream Top 40 radio on 23 February 2010, but failed to chart on Billboard Hot 100. 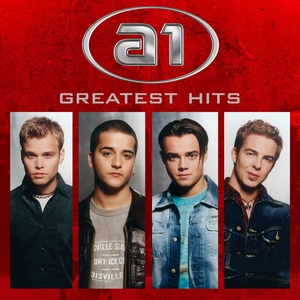 "Take You Home" is a song by British-Norwegian boyband A1, released as the lead single from their fourth studio album, Waiting for Daylight. Released nearly a year prior to the album, it is the group's first single release not to feature former band member Paul Marazzi, as he left the group seven years prior. The single was released on 2 November 2009 in Norway only, after heavy promotion of the song on The X Factor in Norway. The song peaked at No. 9 on the Norwegian Singles Chart, and at No. 3 on Norwegian iTunes. The track also served as the 2009 Norwegian Comic Relief charity single.

"Don't Wanna Lose You Again" is a song by British-Norwegian boy band A1, released as the second single from their fourth studio album, Waiting for Daylight (2010).

Rediscovered is the fifth studio album by English-Norwegian pop group A1. The album was released on 2 November 2012 in Norway, exclusively through daWorks Records. Two singles have thus far been released from the album: "Just Three Words", featuring singer Annie Khalid, which was released as a promotional single in April 2012, and the album's official lead single, "Trust Me", released on 5 October 2012. The album debuted at number 17 in Norway, becoming their lowest-charting album in their career. "Christopher Columbus" was released as the album's third single on April 2013. "That Somebody Is Me" has been released as a free track on 17 October 2014, during the Big Reunion Tour. This is the last album as a trio before original member Paul Marazzi returned to the group nearly six years later.

Keiino is a Norwegian, supergroup consisting of Sámi rapper Fred Buljo, and Norwegian singers Alexandra Rotan and Tom Hugo. The group was created in late 2018 in preparation for the participation in Melodi Grand Prix 2019.