Bhanu Prakash Singh was an Indian politician. He was the Governor of Goa. He was elected to the Lok Sabha, the lower house of the Parliament of India as a member of the Indian National Congress. [1] [2] [3] [4] 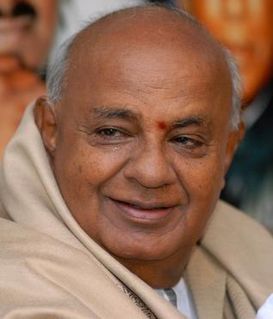 Haradanahalli Doddegowda Deve Gowda is an Indian politician and former Prime Minister of India from 1 June 1996 to 21 April 1997. He was previously the 14th Chief Minister of Karnataka from 1994 to 1996. He presently is a Member of Parliament in the Rajya Sabha representing Karnataka.

Neelam Sanjiva Reddypronunciation (help·info) was the sixth President of India, serving from 1977 to 1982. Beginning a long political career with the Indian National Congress Party in the Indian independence movement, he went on to hold several key offices in independent India—as the first Chief Minister of Andhra Pradesh, a two-time Speaker of the Lok Sabha and a Union Minister—before becoming the youngest-ever Indian president.

Nathuram Mirdha (1921–1996) was a parliamentarian, freedom fighter, social reformer and popular farmer leader of Marwar region in Rajasthan, India. He was born in Kuchera, Nagaur district, Rajasthan on 20 October 1921. His father's name was Thana Ram Mirdha. 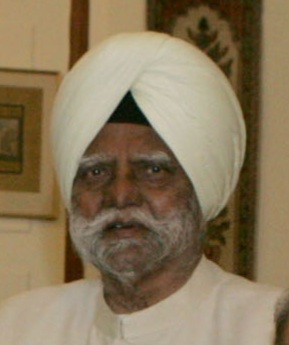 Buta Singh was an Indian politician and a senior leader of the Indian National Congress. He was the Union Home Minister of India, Governor of Bihar and was chairman of the National Commission for Scheduled Castes from 2007 to 2010.

Om Prakash Chautala is a former Chief Minister of Haryana from Indian National Lok Dal. In January 2013, a New Delhi court sentenced Chautala and his son Ajay Singh Chautala to ten years' imprisonment under various provisions of the IPC and the Prevention of Corruption Act.

Varmā, Verma, Varman, or Burman are surnames found in India and South-East Asia.

Although a parliamentary democracy, Indian politics has increasing become dynastic, possibly due to the absence of a party organization, independent civil society associations that mobilize support for the party, and centralized financing of elections. The dynastic phenomenon is seen from national level down to district level. One example of dynastic politics has been the Nehru–Gandhi family which produced three Indian prime ministers. Family members have also led the Congress party for most of the period since 1978 when Indira Gandhi floated the then Congress(I) faction of the party. The ruling Bharatiya Janata Party also features several senior leaders who are dynasts.However, the phenomenon of dynastism is at much lower level in the BJP than the Congress party. Dynastic politics is prevalent also in a number of political parties with regional presence.Among the regional parties, the NCP has particularly high level of dynasticism.

This is a partial listing of prominent political families of Rajasthan. 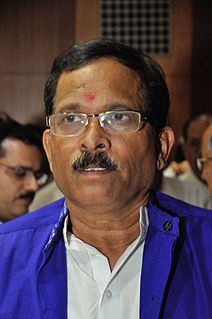 Bhanu Pratap Singh Verma is an Indian politician. He stood for the 2004 Lok Sabha elections as BJP candidate and is currently a Member of Parliament from Jalaun.

Bhagat Singh Koshyari is an Indian politician serving as the Governor of Maharashtra and the Governor of Goa . An RSS veteran, Koshyari served as National Vice-President of BJP and party's 1st State president for Uttarakhand. He also served as 2nd Chief Minister of Uttarakhand from 2001 to 2002 and thereafter, he was the leader of the opposition in the Uttarakhand Legislative Assembly from 2002 to 2003. He has also served as an MLC in Uttar Pradesh Legislative Council and MLA in Uttarakhand Legislative Assembly. Later Served as an MP in Rajya Sabha from 2008 to 2014 from Uttarakhand and then the MP in the 16th Lok Sabha from Nainital-Udhamsingh Nagar constituency, earning him the distinction of being elected in both houses of State Legislature and both houses of National Parliament respectively.

Jagmohan Malhotra, known by the mononym Jagmohan, is a former Indian civil servant and politician belonging to the Bharatiya Janata Party. He served as the Lieutenant Governor of Delhi and Goa, as well as the 5th Governor of Jammu and Kashmir. He was also elected to the Lok Sabha and served as the Union Minister for Urban Development and Tourism.

Professor Siddheshwar Prasad was an Indian politician belonging to the Indian National Congress. He was elected to the Lok Sabha, lower house of the Parliament of India from the Nalanda Constituency of Bihar in 1962, 1967 and 1971. He was earlier a Professor in Nalanda College in Bihar. He was the Governor of Tripura from June 1995 to June 2000.

Rajdeo Singh was an Indian politician. He was elected to the Lok Sabha, the lower house of the Parliament of India from the Jaunpur constituency in Uttar Pradesh in 1962, 1967 and 1971 as a member of the Indian National Congress.

Shankarrao Shantaram More is an Indian politician. He was elected to the Lok Sabha, the lower house of the Parliament of India.

Biddika Satyanarayana was an Indian politician. He was a Member of Parliament, representing Parvathipuram in the Lok Sabha, the lower house of India's Parliament, as a member of the Indian National Congress.