Bled Strategic Forum (BSF) is an annual international conference organized since 2006. It is hosted in Bled, Slovenia. Its aim is to be a platform to express contrasting opinions on modern society and its future. It's a leading conference of leaders of Central and South-East Europe. The forum was initiated by the Government of Slovenia. [1] [2] [3]

The World Economic Forum (WEF), based in Cologny, Geneva Canton, Switzerland, is an international NGO, founded on 24 January 1971. The WEF's mission is stated as "committed to improving the state of the world by engaging business, political, academic, and other leaders of society to shape global, regional, and industry agendas". 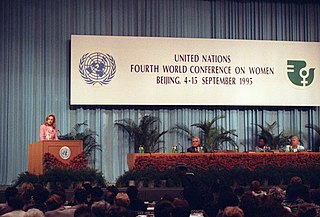 The Fourth World Conference on Women: Action for Equality, Development and Peace was the name given for a conference convened by the United Nations during 4–15 September 1995 in Beijing, China.

The United Nations Permanent Forum on Indigenous Issues is the UN's central coordinating body for matters relating to the concerns and rights of the world's indigenous peoples. "Indigenous person" means native, original, first people and aboriginal. There are more than 370 million indigenous people in some 70 countries worldwide. The forum is an advisory body within the framework of the United Nations System that reports to the UN's Economic and Social Council (ECOSOC). The first indigenous to be elected to office at a United Nations meeting was Chief Ted Moses of the Grand Council of the Crees in Canada, in 1989.

France has been a member of the United Nations (UN) since its foundation in 1945 and is one of the five nations, alongside the United States, China, Russia and the United Kingdom, that holds a permanent spot on the United Nations Security Council (UNSC), which is responsible for maintaining international peace and security. France has contributed to the organisation over the years through its leadership and sponsorship of various resolutions and other major UN bodies as well as being one of the largest-contributing states to both the general budget and to the peacekeeping operations budget. Several French Presidents have openly spoken of their support for the UN and its aims and there are clear links between France’s own policies and the values which the UN espouses, particularly concerning human rights. In the last decade, France has called for, proposed and supported various reforms on the UNSC and their Peacekeeping Operations (PKO). The UN, since its foundation, represents the core of France’s engagement with the multilateral international system.

Strategic Foresight Group (SFG) is a think tank based in India that works on global issues. It was established in 2002. Srgjan Kerim is a Macedonian diplomat, economist, former Foreign Minister and President of the 62nd Session of the United Nations General Assembly. His term of office began on September 18, 2007 and ended on September 16, 2008. He is of Macedonian Turkish descent.

Sundeep Waslekar is an Indian thought leader on conflict resolution and global future. He is the President of Strategic Foresight Group and has authored three books on governance and several research reports on managing future challenges. Sundeep Waslekar is known for developing innovative policy concepts for peaceful change and his ideas have been discussed by the European Parliament, the House of Commons of the United Kingdom and House of Lords, the Indian Parliament, forums of the United Nations including the United Nations Security Council, World Economic Forum meetings at Davos and Dead Sea, and other institutions. 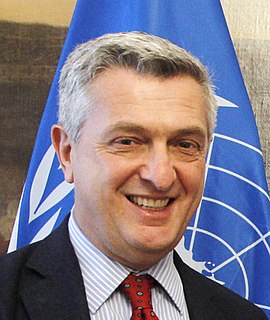 The Group of Eastern European States (EEG) is one of the five United Nations regional groups and is composed of 23 Member States from Eastern, Central and Southern Europe.

Adriano Ruchini is an Italian businessman. 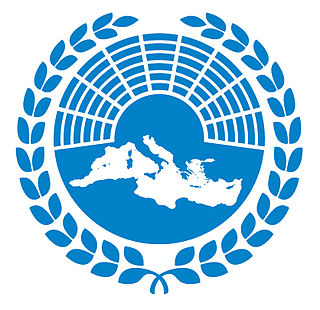 The Parliamentary Assembly of the Mediterranean (PAM) is an international organisation established in 2005, following fifteen years of cooperation among States of the Mediterranean region. Cooperation focused on themes of common interest, such as political, socio-economic and environmental issues. The members of this organization have discussed these issues at periodic Conferences on Security and Cooperation, the first of which was held in 1990 and developed under the auspices of the Inter-Parliamentary Union.

The Global Green Growth Institute (GGGI) is a treaty-based international organization headquartered in Seoul, South Korea. The organization aims to promote green growth, a growth paradigm that is characterized by a balance of economic growth and environmental sustainability. GGGI provides research and stakeholder engagement for green growth plans, especially in developing countries, aiming to replace the more typical paradigm based on industrial development.

The International Economic Forum of the Americas (IEFA), is an international not-for-profit organization headquartered in Canada, with offices in Montreal, Toronto, Miami and Paris. The IEFA was created in 1995 to promote an exchange of views and perspectives on pressing economic issues of our times among world leaders, renowned experts and business executives. It organizes several high-level conferences per year and has grown to become a landmark organization bringing together more than 10,000 speakers and 600 speakers every year.

Darja Bavdaž Kuret is a Slovenian diplomat, social scientist and women's rights advocate. Following several ambassadorial posts since 1995, she was appointed Permanent Representative of Slovenia to the United Nations in August 2017. Bavdaž Kuret is a keen supporter of equal rights for women.