Bola Agbaje FRSL is a playwright of Nigerian origin. [1]

Agbaje's first play Gone Too Far! was produced at the Royal Court Theatre in London, where it won the 2008 Laurence Olivier Award for Outstanding Achievement in an Affiliate Theatre. [2] [1] It was later revived for very brief runs at the Albany Theatre and Hackney Empire. [2]

In 2018, Agbaje was elected as a Fellow of the Royal Society of Literature (RSL), one of 40 under the age of 40 elected in an RSL initiative designed "to address historical biases". [4]

Agbaje has said that she believes in God, but does not follow Christianity or Islam. [1] Her brother served time in prison. [1]

Roy Samuel Williams,, is an English playwright. Williams has many awards including the George Devine Award for Lift Off, the 2001 Evening Standard Award for Most Promising Playwright for his play Clubland, the 2002 BAFTA Award for Best Schools Drama for Offside and 2004 South Bank Show Arts Council Decibel Award. Most recently his play Sucker Punch was nominated for the Evening Standard Award for Best New Play and the Olivier Award for Best New Play 2011. He was appointed Officer of the Order of the British Empire (OBE) in the 2008 Birthday Honours and sits on the board of trustees for Theatre Centre. In 2018, he was a made a fellow of The Royal Society of Literature. 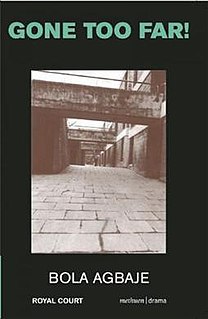 Gone Too Far! is a play written by Bola Agbaje. It was produced at the Royal Court Theatre.

Gwendoline Riley is an English writer. 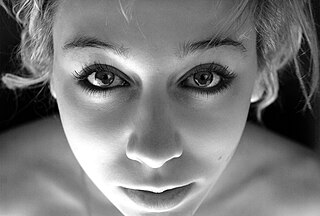 Polly Stenham is an English playwright known for her play That Face, which she wrote when she was 19 years old.

Lucy Ann Kirkwood is a British playwright and screenwriter. She is writer in residence at Clean Break. In June 2018 Kirkwood was elected Fellow of the Royal Society of Literature in its "40 Under 40" initiative.

Lucy Caldwell is a Northern Irish playwright and novelist.

Dominic Cooke is an English director and writer.

Lucy Prebble is a British playwright. She is the author of the plays The Sugar Syndrome, The Effect and ENRON, and adaptation writer of the television series Secret Diary of a Call Girl.

Amy Sackville is a British writer whose debut novel The Still Point was the winner of the 2010 John Llewellyn Rhys Prize.

Ella Hickson is a British playwright and theatrical director who was brought up in Surrey near Guildford and educated at Guildford High School from 1996-2003. She now lives in London. 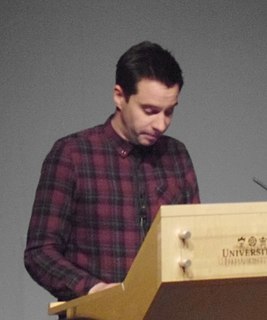 James Graham is a British playwright and screenwriter. His work has been staged throughout the UK and internationally, at theatres including the Bush, Soho Theatre, Clwyd Theatr Cymru and the National Theatre.

Helen Mort is a British poet and novelist. She is a five-time winner of the Foyle Young Poets award, received an Eric Gregory Award from The Society of Authors in 2007, and won the Manchester Poetry Prize Young Writer Prize in 2008. In 2010, she became the youngest ever poet-in-residence at The Wordsworth Trust, Grasmere. In the same year she was shortlisted for the Picador Prize and won the Norwich Café Writers' Poetry Competition with a poem called `Deer`. She was the Derbyshire Poet Laureate from 2013 to 2015. In 2014, she won the Fenton Aldeburgh First Collection Prize for "Division Street".

Deborah Smith is a British translator of Korean fiction. She translated The Vegetarian by Korean author Han Kang, for which she and the author were co-winners of the Man Booker International Prize in 2016. 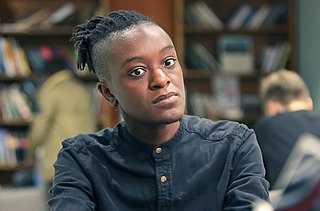 Jay Bernard, FRSL, is a British writer, artist, film programmer, and activist from London, UK. Bernard has been a programmer at BFI Flare since 2014, co-editor of Oxford Poetry, and their fiction, non-fiction, and art has been published in many national and international magazines and newspapers.

Vinay Patel is a British-Indian screenwriter and playwright. He is best known for writing the BBC drama Murdered by My Father.