The British Newspaper Archive web site provides access to searchable digitized archives of British and Irish newspapers. It was launched in November 2011.

The British Library Newspapers section was based in Colindale in north London, until 2013, [1] and is now divided between the St Pancras and Boston Spa sites. [2] The library has an almost complete collection of British and Irish newspapers since 1840. This is partly because of the legal deposit legislation of 1869, which required newspapers to supply a copy of each edition of a newspaper to the library. London editions of national daily and Sunday newspapers are complete back to 1801. In total, the collection consists of 660,000 bound volumes and 370,000 reels of microfilm containing tens of millions of newspapers with 52,000 titles on 45 km of shelves.

As of 2021 [update] , family history website Findmypast and the British Library announced an extension of their long term partnership; the British Newspaper Archive. The announcement confirmed the result of a further 14 million pages being uploaded for online publication over the next three years, including the addition of 1 million new free-to-access pages each year. [10]

In May 2010, a ten-year programme of digitization of the newspaper archives with commercial partner DC Thomson subsidiary Brightsolid began. [11] [12] In November 2011, BBC News reported on the launch of the British Newspaper Archive, an initiative to facilitate online access to over one million pages of pre-20th century newspapers. [13] The same newspapers from this partnership have also been made available to view on Findmypast and Genes Reunited.

As well as original paper scanning, the project also facilitated the scanning of existing microfilm, created by the British Library over the years. [14] The digitisation project established an online search facility which people could consult without having to visit the British Library newspaper depository in person. [15]

The section also has extensive records of non-British newspapers in languages that use the Latin and Cyrillic alphabets. The library's substantial holdings of newspapers in the languages of Asia and the Middle East may be accessed at the library's reading rooms at St. Pancras.

Considered the most significant mass digitisation of newspapers the UK has seen, Roly Keating, Chief Executive of the British Library, recalled: "Over the past decade, the British Newspaper Archive has transformed access to the extraordinarily rich collection of historic newspapers in our care. As well as protecting the fragile originals, digitisation has transformed the ways in which researchers can search newspaper content and make connections and discoveries that might never have been possible using print or microfilm." [18]

While access within the British Library is free, online access is via a subscription system based on daily or item charges, £12.95 monthly or yearly fees of up to £79.95 as of July 2019. New visitors may access three free page views and explore hundreds of national, regional and local titles dating from the 1700s–2000s. [19]

As part of The Wikipedia Library, Brightsolid provided free one-year subscriptions to a limited number of experienced Wikipedia editors from July 2014. [20] The agreement was terminated in 2016 because "structural changes at their parent organisation(s) mean that there is no longer interest in continuing the partnership with The Wikipedia Library". [21]

Reviews of the service have been mixed, with some early responses complimentary about the ability to access and search the large data sets. [22] [23] However, there have been complaints of the excessive cost and the general policy of the British Library allowing a private company the rights to the newspapers. [24] [25] One writer noted that: "The BNA demonstrates what happens to our cultural heritage when there is no political will for public investment. The nineteenth-century newspaper press was one of the period's greatest achievements but, rather than celebrate it, opening it up and giving it back to the nation, the British Library have been forced to sell it off." [26]

The search Interface has also been criticised for problems in identifying where the searched terms are on the retrieved pages, and in the unreliability of the web interface, with bugs preventing images loading and regular crashes. [27] 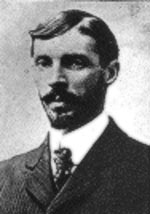 Henri Farman was a British-French aviator and aircraft designer and manufacturer with his brother Maurice Farman. Before dedicating himself to aviation he gained fame as a sportsman, specifically in cycling and motor racing. Henri took French nationality in 1937.

DC Thomson is a media company based in Dundee, Scotland. Founded by David Couper Thomson in 1905, it is best known for publishing The Dundee Courier, The Evening Telegraph and The Sunday Post newspapers, and the comics Oor Wullie, The Broons, The Beano, The Dandy and Commando. It also owns the Aberdeen Journals Group which publishes the Press and Journal. The company owns several websites, including Findmypast, and owned the now defunct social media site Friends Reunited.

FamilySearch is a nonprofit organization and website offering genealogical records, education, and software. It is operated by The Church of Jesus Christ of Latter-day Saints, and is closely connected with the church's Family History Department. The Family History Department was originally established in 1894 as the Genealogical Society of Utah (GSU) and is the largest genealogy organization in the world.

The Thomason Collection of Civil War Tracts consists of more than 22,000 pamphlets, broadsides, manuscripts, books, and news sheets, most of which were printed and distributed in London from 1640 to 1661. The collection represents a major primary source for the political, religious, military, and social history of England during the final years of the reign of King Charles I, the English Civil War, the Interregnum, and the English Restoration of King Charles II. It is now held in the British Library.

Europeana is a web portal created by the European Union containing digitised cultural heritage collections of more than 3,000 institutions across Europe. It includes records of over 50 million cultural and scientific artefacts, brought together on a single platform and presented in a variety of ways relevant to modern users. The prototype for Europeana was the European Digital Library Network (EDLnet), launched in 2008.

The JISC Digitisation Programme was a series of projects to digitise the cultural heritage and scholarly materials in universities, libraries, museums, archives, and other cultural memory organizations in the United Kingdom, from 2004 to 2010 The program was managed by the UK's Joint Information Systems Committee, the body that supports United Kingdom post-16 and higher education and research in support of learning, teaching, research and administration in the context of ICT.

The Burney Collection consists of over 1,270 17th-18th century newspapers and other news materials, gathered by Charles Burney, most notable for the 18th-century London newspapers. The original collection, totalling almost 1 million pages, is held by the British Library.

The Francis Place Collection is an important British Library collection of press cuttings, leaflets, and ephemera about British politics and economics between 1770 and 1853 with some earlier material. The collection was created by the social reformer Francis Place (1771–1854). In 1844, Place suffered a stroke, and possibly a brain tumour, which left him with difficulty reading and writing. It was about this time that he began to organise his collection into guard-books as he was unable to be as active in political circles as he had been previously. The original paper collection is in 180 volumes which can be viewed at the main St Pancras site of the British Library and is also available to the public on Microfilm.

Eighteenth Century Collections Online (ECCO) is a digital collection of books published in Great Britain during the 18th century.

Findmypast is a UK-based online genealogy service owned, since 2007, by British company DC Thomson. The website hosts billions of searchable records of census, directory and historical record information. It originated in 1965 when a group of genealogists formed a group named "Title Research". The first internet website went live in 2003. 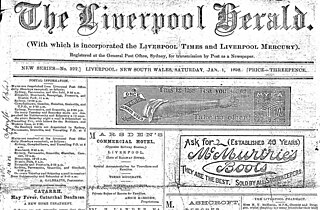 The Liverpool Herald, earlier published as The Liverpool Mercury and The Liverpool Times, was a weekly English language newspaper published in Liverpool, New South Wales, Australia from 1897 to 1907 and is an important resource to the history of the local area of Liverpool. The issues of the ten-year period covered the daily events of the then country-town Liverpool as well as providing commentaries on events overseas at the time. They also represent the only existing detailed record of any type from that period.

Adam Matthew Digital is an academic publisher based in the United Kingdom and the United States. It has been an independent subsidiary of Sage Publications since 2012.

James William Grant FRSE FRAS, 3rd Laird of Wester Elchies (1788–1865) was a Scottish astronomer and landowner. On 23 July 1844 he was the first person to observe and record the existence of the star Antares B.

Stanley Spooner, was an editor and journalist. He was originally the creator and editor of an automobile journal in 1896 called The Automotor And Horseless Vehicle Journal. The title was changed to The Automotor Journal, in April 1902. In January 1909, he was the creator and editor of the first aeronautical weekly magazine in the world called Flight, now titled Flight International. After the success of Flight, his Automotor Journal was renamed The Auto. He was made a Freeman of the City of London, and a liveryman of The Worshipful Company of Coachmakers and Coach Harness Makers, on 15 January 1929.

Frances Olive Outerbridge (1846–1934) was a nurse and British suffragette, in 1912, she was rewarded the Women's Social and Political Union Hunger Strike Medal 'for Valour'.