Bukama is a town in Haut-Lomami Province of south-eastern Democratic Republic of the Congo. As of 2009 it had an estimated population of 42,718. [2] 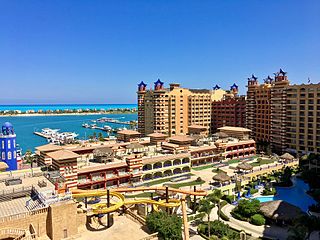 El Alamein is a town in the northern Matrouh Governorate of Egypt. Located on the Arab's Gulf, Mediterranean Sea, it lies 106 kilometres (66 mi) west of Alexandria and 240 kilometres (149 mi) northwest of Cairo. As of 2007, it had a population of 7,397 inhabitants. 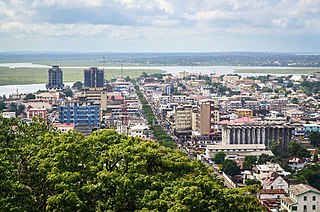 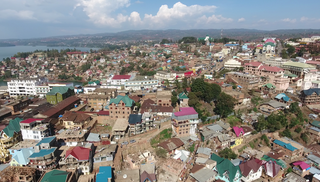 Bukavu is a city in eastern Democratic Republic of the Congo (DRC), lying at the extreme south-western edge of Lake Kivu, west of Cyangugu in Rwanda, and separated from it by the outlet of the Ruzizi River. It is the capital of the South Kivu province and as of 2012 it had an estimated population of 806,940.

Dargaville is a town in the North Island of New Zealand. It is situated on the bank of the Northern Wairoa River in the Kaipara District of the Northland region. The town is located 55 kilometres southwest of Whangārei.

Goma is the capital of North Kivu province in the eastern Democratic Republic of the Congo. It is located on the northern shore of Lake Kivu, next to the Rwandan city of Gisenyi. The lake and the two cities are in the Albertine Rift, the western branch of the East African Rift system. Goma lies only 13–18 km (8.1–11.2 mi) south of the active Nyiragongo Volcano. The recent history of Goma has been dominated by the volcano and the Rwandan genocide of 1994, which in turn fuelled the First and Second Congo Wars. The aftermath of these events was still having effects on the city and its surroundings in 2010. The city was captured by rebels of the March 23 Movement during the M23 rebellion in late 2012, but it has since been retaken by government forces. 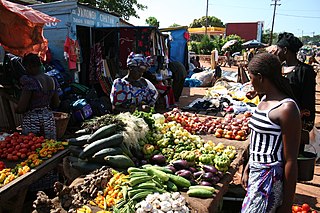 Banfora is a city in south western Burkina Faso, with a population of 117,200 making it the sixth most populous city in Burkina Faso. It is the capital of the Comoe province. The city lies 85 kilometres (53 mi) south-west of Bobo-Dioulasso, on the Abidjan – Ouagadougou Railway. The Cascades de Karfiguéla are a series of waterfalls close to Banfora.

Boma is a port town on the Congo River, some 100 km upstream from the Atlantic Ocean, in the Kongo Central province of the Democratic Republic of the Congo, adjacent to the border with Angola. It had an estimated population of 162,521 in 2012.

Bouar is a market town in the western Central African Republic, lying on the main road from Bangui (437 km) to the frontier with Cameroon (210 km). The city is the capital of Nana-Mambéré prefecture, has a population of 40,353, while the whole sous-préfecture has a population of 96,595. Bouar lies on a plateau almost 1000m above sea level and is known as the site of Camp Leclerc, a French military base.

Berbérati is the second-largest city in the Central African Republic, with a population of 15,155(2013 census). Located in the south-west of the country near the border with Cameroon, it serves as capital of the Mambéré-Kadéï Prefecture and gives its name to the main Sub-prefecture.

Moanda or Muanda is a town and territory lying on the Atlantic Ocean coast of the Democratic Republic of Congo at the mouth of the Congo River. It is situated in Kongo Central Province, and has a population of 50,000. The town has an airport and is known for its beaches, and has a few limited tourist facilities, but tourism is incidental to the main economic activities of the town.

Boende is a town and capital of Tshuapa Province, lying on the Tshuapa River, in the Democratic Republic of Congo. It is a river port with riverboats sailing to Kinshasa via Mbandaka and is also home to an airport. As of 2009 it had an estimated population of 36,158. The national language used locally is Lingala.

Tokmok is a city in the Chuy Valley, northern Kyrgyzstan, east of the country's capital of Bishkek, with a population of 53,231 in 2009. Its geographical location is 42°50′N75°17′E; its altitude is 816 m above sea level. From 2004 to 2006, it was the administrative seat of Chuy Region. Just to the north is the Chu River and the border with Kazakhstan. 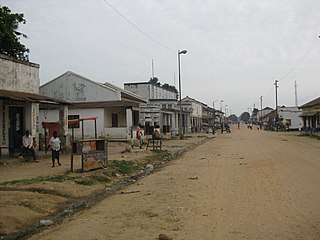 Kindu is a city in the Democratic Republic of Congo, the capital of Maniema province. It has a population of about 200,000 and is situated on the Lualaba River at an altitude of about 500 metres, and is about 400 km west of Bukavu. 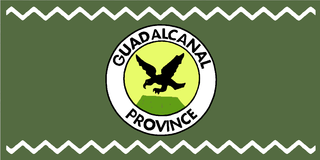 Guadalcanal Province is one of the nine provinces of Solomon Islands, consisting of the island of Guadalcanal. It is a 2,510 square mile (5,336 km²) island and is largely a jungle. Its name was given by Pedro de Ortega Valencia, born in the village of Guadalcanal, Seville, Spain. The national capital and largest city of the Solomon Islands, Honiara, is on the island; in July 1983 it was designated a 22 km2 (8.5 sq mi) separately-administered Capital Territory and is no longer considered part of the province. The population of the province is 93,613 (2009), not including the capital territory. The population of the island is 155,605. Honiara serves as the provincial capital. The climate is rainforest tropical. The estimated terrain elevation above sea level is 447 meters (1,467 ft).

Bimbo is the capital of Ombella-M'poko, one of the 14 prefectures of the Central African Republic, and is located 25.5 kilometres (15.8 mi) by road southwest of the centre of the capital, Bangui. The country's second-largest city, Bimbo had a population of 124,176 as of the 2003 census and a calculated 2013 population of 267,859.

Papanasam is a panchayat town in Thanjavur district in the Indian state of Tamil Nadu. It is located 25 kilometres (16 mi) from Thanjavur and 15 kilometres (9.3 mi) from Kumbakonam. The name literally translates to "Destruction of Sins" in the Tamil language. It is the suburban region of business city of Kumbakonam.

The Democratic Republic of the Congo was a net energy exporter in 2008. Most energy was consumed domestically in 2008. According to the IEA statistics the energy export was in 2008 small and less than from the Republic of Congo. 2010 population figures were 3.8 million for the RC compared to CDR 67.8 Million.

Watsa is a community in the Haut-Uele Province of the Democratic Republic of the Congo, administrative center of the Watsa Territory. It is served by Watsa Airport, a grass airstrip 4 kilometres (2.5 mi) south of the town.

The Compagnie du chemin de fer du bas-Congo au Katanga (BCK) was a railway operator in the Congo Free State, Belgian Congo and later in the Democratic Republic of the Congo and Zaire. Most of the lines were in the southern Katanga Province, with links to the Kasai River for transport of mineral exports down to Kinshasa and onward to the port of Matadi, and a link to the Angolan railway network for transport to Lobito on the Atlantic. 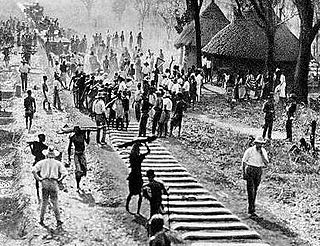 The Compagnie de Chemin de fer du Katanga (CFK) was a railway company in the Congo Free State and Belgian Congo between 1902 and 1952. It held the railway concession that linked the port of Bukama on the navigable section of the Lualaba River through the mining region and the town of Elisabethville (Lubumbashi) to Sakania, where it connected with the Rhodesian railway network. Operations were subcontracted to the Compagnie du chemin de fer du bas-Congo au Katanga (BCK).