Califone is an experimental rock band from Chicago. The band is named after Califone International, an audio equipment manufacturer. [1] Their work has been critically acclaimed. [2] [3] [4]

Califone has released an album and feature film, both of which are titled All My Friends Are Funeral Singers . The album was released October 6, 2009 on Dead Oceans. [5] The feature film was made available in 2010, and the band toured as a live soundtrack to the film.

All My Friends Are Funeral Singers is the follow-up album to 2006's Roots & Crowns , which The New York Times called "enthralling." [6]

In 2011, a feature-length tour documentary about Califone, called "Made a Machine by Describing the Landscape", was released by IndiePix. [7] The film was directed by Solan Jensen and Joshua Marie Wilkinson, and presents an intimate portrait of the band on tour in Europe and the US after the release of "Heron King Blues". [8]

After the breakup of his former band Red Red Meat, frontman Tim Rutili formed Califone as a solo project. Rutili's solo effort soon became a full-fledged musical project with a regular and rotating list of contributors, including many former members of Red Red Meat and some members of other Chicago bands.

According to Rutili, Califone started as a home project: "The statement of intent would have been 'easy listening' compared to what we were doing with Red Red Meat. This was supposed to be making little pop songs out of found pieces. It was supposed to be just a little home project, and it slowly grew from there. Now it seems like just about anything goes." [9]

Califone's sound is a combination of Red Red Meat's blues-rock and experimental music, with inspiration drawn from early American folk music, pop, as well as electronic and groups like Psychic TV. Listeners familiar with Red Red Meat can quickly tell that Califone is not an attempt to revive the old band; elements from a number of musical styles contribute to their distinctive sound.

Their single "Funeral Singers" appears on the soundtrack of the video game Watch Dogs .

In 2019, Califone undertook a tour of house concerts and other small venues. The lineup consisted of Rutili, Massarella, and second percussionist Rachel Blumberg.

All My Friends Are Funeral Singers

The album's companion film is about a psychic woman who lives alone in the woods. According to Rutili, who wrote the screenplay and directed the film,

She lives in a house full of ghosts, and one day, the ghosts realize they’re trapped, and she has to find a way–even though she doesn’t want them to go–to get them out of the house. Then they start destroying her life. [10]

Rutili has had a recurring dream since his youth, involving a giant man-bird creature, and then he discovered that the creature was actually a representation of an ancient Druid god called the heron king, which the British feared so deeply that they fled the battlefield when an effigy of the heron king was hoisted above the heads of the opposing army, and that Rutili realized that he had somehow been manifesting an image of this long-dead god figure in his head since he was a child. [11]

Califone has released instrumental albums that were recorded while the band played live soundtracks for films recorded in the 2000s. Deceleration 1 and Deceleration 2 were released in 2002 and 2003, respectively. Decelerations 3 and 4 are rumored to be released sometime in the future. [12]

In 1997, members of Red Red Meat collaborated with members of oRSo and Rex to record as Loftus for Perishable Records.

In 2002, Tim Rutili and Ben Massarella collaborated with Modest Mouse frontman Isaac Brock and others to release the album Sharpen Your Teeth under the band name Ugly Casanova.

In 2003, Tim Rutili, Ben Massarella and Jim Becker collaborated with Ottawa musician Miche Jetté, to record five of his songs for an independent mini-disc. This recording would later be released properly in 2005 as the first side of Jette's debut solo album (under his stage name Flecton), for the Canadian label, Kelp Records. The latter half Flecton's Never Took a Wife was recorded with Memphis indie rockers, the Grifters. [13] [14]

In 2005, Califone collaborated with Freakwater as a backing band to record the album Thinking of You .

In 2006, Tim Rutili teamed up with Wil Hendricks and Michael Krassner under the name The Unseen Hand to record the soundtrack for Rank , a documentary about bullriding.

In 2006, Califone teamed up with animator/musician Brent Green on a series of performance art pieces featuring animation, live music, and spoken word. That same year, they were featured on the soundtrack for the movie Stranger than Fiction .

In December 2008, the Canadian band Flecton released The Bright Side of Dying , with Califone as the backing band. The album was recorded in Chicago and features Ben Massarella, Tim Rutili, Joe Adamik, and Jim Becker). The eight song vinyl LP (including a cover of Merle Haggard's "Workin' Man Blues") was released on Ottawa's Kelp Records. [13] [15]

Members of Califone helped record Iron and Wine's 2011 album, Kiss Each Other Clean .

Joan of Arc was an American indie rock band from Chicago, Illinois named after the French saint Joan of Arc. They formed in 1995, following the breakup of Cap'n Jazz.

Ugly Casanova is an American indie rock band signed to Sub Pop Records. The band has released one album, Sharpen Your Teeth. 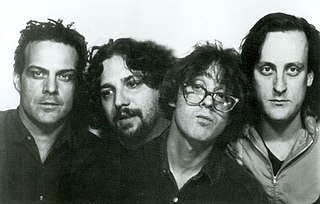 Fruit Bats is an American rock band formed in 1997 in Chicago, Illinois, United States. Noted as an early entrant into the folk-rock boom of the early 2000s, the group has had many personnel changes but revolves around singer/songwriter Eric D. Johnson. 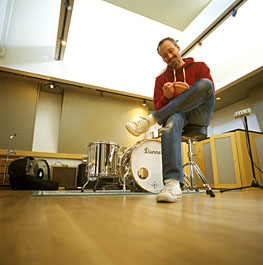 Perishable Records is an independent record label founded by Chicago musicians Ben Massarella and Tim Rutili in 1993. Rutili and Massarella were both members of Red Red Meat at the time, and released the band's "Hot Nikkity Truck Monkey" as its first single. The band was almost immediately after signed to Sub Pop, but after Red Red Meat broke up in 1997, the pair revived the label name and began releasing new material on it. Its first release after the dissolution of the Sub Pop contract was an album by Loftus, released in 1998. Perishable's recording studio initially was a renovated first-floor apartment in Chicago, and musicians recorded to 2-inch analog audiotape before moving on to processing using the digital audio workstation ProTools. The label's offices, in 1999, were in a truck wash in south Chicago that doubled as the office for Massarella's side business, BJ Transportation Service. In 2002, the label lost some of its flagship acts - The Fire Show had broken up, and Fruit Bats had signed with Sub Pop - and Massarella and Rutili openly talked about potentially winding down its operation. However, by 2003, the label was operating out of an erstwhile elementary school in the Pilsen neighborhood, where the group had also outfitted a studio it dubbed Clava. Clava was located in a converted garage next to the school, was financed by Massarella, and was operated by Brian Deck of Red Red Meat.

Tim Rutili is an American musician, filmmaker, and visual artist. He is best known as the founder of Red Red Meat and Califone, and his membership in supergroups Ugly Casanova and Loftus.

Ben Massarella is an American percussionist and drummer. He is a member of Califone, a former member of Red Red Meat, Loftus, and Orso, and co-founded Perishable Records with Tim Rutili in 1993.

Roots & Crowns is the sixth studio album by American indie rock band Califone. It was released on October 10, 2006, on Thrill Jockey.

Otis Taylor is an American blues musician. He is a multi-instrumentalist whose talents include the guitar, banjo, mandolin, harmonica, and vocals. In 2001, he was awarded a fellowship to the Sundance Film Composers Laboratory.

Chris Murphy is an American musician, violinist, bandleader, and composer who has been composing and performing music for over 30 years. His music combines jazz, blues, country, classical, ethnic, and electronic music. Chris has performed in over 40 U.S. states, including Hawaii, and in England and Ireland. He has lived, worked, and studied in New York City, Boston, Seattle, and his current home, Los Angeles, United States.

oRSo is a US-based band formed in 1996 and led by Phil Spirito of Rex, HiM (US), Loftus, and Califone featuring Brian Deck of Red Red Meat and Ben Massarella of Califone. The musical style is self-described as "carny rock, chamber folk or just orchestrated weirdness"; their songs, which feature prominent banjo parts, also feature experimental sounds such as those made by typewriters and toilets. The band releases on Perishable Records.

All My Friends Are Funeral Singers is a 2009 album by Califone. The album was the first release by Califone on Dead Oceans. The 2LP version of the album contains a bonus track, called "Lunar H", on side 4. The track Buñuel is biographical of Spanish filmmaker Luis Buñuel.

Scott H. Biram aka The Dirty Old One Man Band is an American blues, punk blues, punk, country, heavy metal musician, record producer, and ordained minister. He is primarily known as one of the prominent musicians of the one-man band musical genre. He has appeared on national television shows such as NBC's The Tonight Show with Jay Leno and performed in prestigious and legendary venues such as Lincoln Center for the Performing Arts in New York City, CBGB in New York City, Hollywood Palladium in Los Angeles, California, The Fillmore in San Francisco, California, Roxy Theater in West Hollywood, California, The Roundhouse in London, United Kingdom, and Paradiso in Amsterdam, Netherlands. His music has been featured in many American television shows and films. He has also appeared as himself in several films and documentaries. The Dirty Old One Man Band has continuously toured in the U.S., Canada, and Europe since 1998.

All My Friends are Funeral Singers is a 2010 experimental drama film directed by Tim Rutili of the band Califone. The film makes extensive use of the music of Califone, and was released as a companion to the band's album of the same name. The film tells the story of a medium, played by Angela Bettis, living with a group of ghosts in the house who want to leave. She finds out that the ghosts were trapped by her grandmother.

Eric Donald Johnson is an American singer-songwriter, composer and multi-instrumentalist. He is best known as the leader and sole permanent member of the influential folk-rock band Fruit Bats, and for his tenure as a member of The Shins. He has also scored films, most notably Our Idiot Brother and Smashed.

Loftus was an American indie rock band from Chicago, signed to Perishable Records. Consisting of former members of Red Red Meat and Rex, it released only one album in 1998.

Joseph Adamik is a musician and composer best known for his involvement with the bands Califone and Iron & Wine. He has also performed since the early 1990s with many Chicago jazz musicians as well as recording and performing with many other groups across different genres.