The Canadian Awards for the Electronic & Animated Arts (CAEAA) is an annual award that recognizes the best video games, animation and multimedia produced that year in Canada. Started in 2006, the categories were developed with the video game companies, animation studios and educational institutions who participated as foundation members. 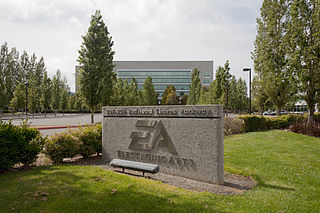 Electronic Arts Inc. (EA) is an American video game company headquartered in Redwood City, California. It is the second-largest gaming company in the Americas and Europe by revenue and market capitalization after Activision Blizzard and ahead of Take-Two Interactive, CD Projekt, and Ubisoft as of May 2020. Founded and incorporated on May 27, 1982, by Apple employee Trip Hawkins, the company was a pioneer of the early home computer game industry and promoted the designers and programmers responsible for its games as "software artists". EA published numerous games and some productivity software for personal computers, all of which were developed by external individuals or groups until 1987's Skate or Die!. The company shifted toward internal game studios, often through acquisitions, such as Distinctive Software becoming EA Canada in 1991.

Visual effects is the process by which imagery is created or manipulated outside the context of a live action shot in filmmaking and video production. The integration of live action footage and CG elements to create realistic imagery is called VFX.

Mainframe Studios is a Canadian computer animation and design company founded in 1991. They are owned by WOW! Unlimited Media Inc. and based in Vancouver, British Columbia. The company previously operated as Rainmaker Entertainment from 2007 to 2016, and Rainmaker Studios from 2016 to 2020, with the "Mainframe" branding eventually repurposed for company's television production division from 2013 to 2020.

Film Roman is an independently owned American animation company. It was originally owned by Starz Inc., which is now a division of Lionsgate, and later by Waterman Entertainment, the production company of producer Steve Waterman. Founded by veteran animator and director Phil Roman in 1984, it is best known for providing animation for the Garfield primetime specials, based on Jim Davis' comic strip of the same name. The studio also produced the animated series The Simpsons, King of the Hill, and Family Guy.

Wayne Gilbert is a Canadian working in Vancouver, British Columbia, now Head of the Character Animation Program at Vancouver Institute of Media Arts (VanArts). He was the Senior Animation Director for EA Blackbox where he animated and directed animation and cinematics for the ground-breaking video games "skate and skate2". His computer-animated short Let Go won a Crystal Heart Award at the Heartland Film Festival. It was his second film created while working at ILM. The first was CPU. Prior to that, he created 2D shorts entitled Bottoms Up and Traffic Jam, which was accepted into the Annecy International Animated Film Festival. He has authored a highly respected book entitled Simplified Drawing for Planning Animation (www.anamie.com).

Rainmaker, headquartered in Vancouver, Canada with an office in Los Angeles, California, is a visual effects, 3D animation and post-production company specialising in feature film, television, commercials, and games. 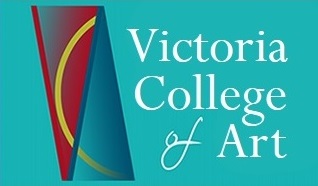 Victoria College of Art (VCA) is a private, non-profit art college located in Victoria, British Columbia, Canada. Founded in 1974 as the Northwest Coast Institute of Arts, the college offers Diploma programs in Fine Arts, Applied Arts Illustration, and Applied Arts Animation. It has no connection whatsoever with Visual College of Art and Design (VCAD) in Vancouver which is owned by the for-profit education company Eminata.

Jeff Tymoschuk is a Canadian composer who writes music for film, television, video games and theatrical productions. His music is often fast-paced and intense to accompany lively action sequences.

Jeff Chiba Stearns is a Canadian independent animation and documentary filmmaker who works in traditional and computer-based techniques.

Virtuos Holdings Pte. Ltd. is a multinational video game developer and a provider of digital entertainment production services for the game and movie industries, founded in 2004. Virtuos has its headquarters and R&D center in Singapore as well as seven development centers located in Shanghai, Chengdu, Xi'an, Ho Chi Minh City, Paris and in Dublin. Virtuos has offices also in Vancouver, San Francisco, Montreal, Tokyo and Seoul. 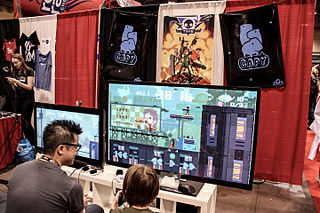 Canada has the third largest video game industry in terms of employment numbers following those in the US and in Japan, with 20,400 employees, 472 companies, and a direct annual economic impact of nearly $3 billion added to Canada's GDP in 2015. Video game development is beginning to rival the film and television production industry as a major contributor to the economy.

Subconscious Password is a 2013 3-D animated film by Chris Landreth offering an imaginary, comedic look at the inner workings of Landreth's mind, as he tries to remember someone's name at a party.