The Carnegie Hero Fund Commission, also known as Carnegie Hero Fund, was established to recognize persons who perform extraordinary acts of heroism in civilian life in the United States and Canada, and to provide financial assistance for those disabled and the dependents of those killed saving or attempting to save others. Those chosen for recognition receive the Carnegie Medal [1] and become eligible for scholarship aid and other benefits. A private operating foundation, the Hero Fund was established in Pittsburgh, Pennsylvania, in 1904 with a trust fund of $5 million by Andrew Carnegie, the Scottish-American industrialist and philanthropist.

The fund was inspired by Selwyn M. Taylor and Daniel A. Lyle, who gave their lives in rescue attempts following the Harwick Mine disaster in Harwick, Pennsylvania, just outside Pittsburgh, on January 25, 1904. The disaster claimed 181, including Taylor and Lyle, who were killed during rescue attempts. Greatly touched by Taylor's and Lyle's sacrifice, Carnegie had medals privately minted for their families, and within two months he wrote the Hero Fund's governing "Deed of Trust", [2] which was adopted by the newly created commission on April 15, 1904.

The Fund is administered by a 21-member volunteer board and a small staff. [3] As of December 2022, a total of 10,340 Carnegie Medals have been awarded since the Fund was established, with the Fund paying $40.5 million in grants, scholarships, death benefits, and other aid. [4] About 11% of nominees received the Carnegie Medal. [5]

The Commission’s working definition of a hero as well as its requirements for awarding remain largely those that were approved by the founder. The Fund's website states the criteria:

About 90% of those awarded are male, and, over the life of the Fund, roughly one-quarter of awards have been given posthumously. [6]

The three inch (7.13 cm) in diameter bronze medals which are given to awardees, are struck by Simons Brothers Co. of Philadelphia and consist of 90% copper and 10% zinc. [7]

A verse from the Gospel of John encircles the outer edge: "Greater love hath no man than this, that a man lay down his life for his friends" (John 15:13).

The first medals issued by the trust were in bronze, silver and gold. The trust soon stopped issuing gold medals. The last silver medal was issued in 1981. [7]

On 21 September 1908, Andrew Carnegie expanded the concept with the establishment of the British Carnegie Hero Fund Trust, based in Dunfermline, Scotland. [8]

Within the next three years, the British trust was followed by equivalent foundations in nine other European countries: 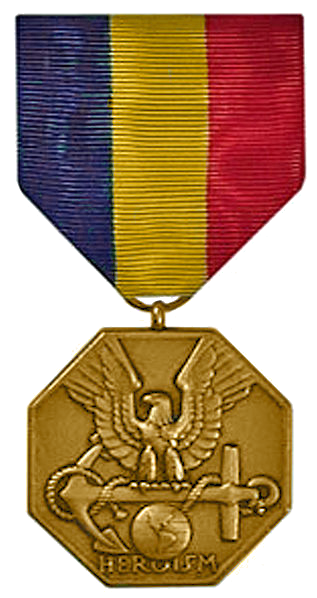 The Airman's Medal (AmnM) is a military award and decoration of the United States Air Force and United States Space Force for personnel who distinguish themselves by heroism involving voluntary risk of their life not involving actual combat with an armed enemy of the United States. The medal was established on 6 July 1960 and is awarded to those service members or those of a friendly nation who, while serving in any capacity with the U.S. Air Force or U.S. Space Force. The performance must have involved personal hazard or danger.

The Coast Guard Medal is a decoration of the United States military that is awarded to any service member who, while serving in any capacity with the United States Coast Guard, distinguishes themselves by heroism not involving actual conflict with an enemy. For the decoration to be awarded, an individual must have performed a voluntary act of heroism in the face of great personal danger or of such a magnitude that it stands out distinctly above normal expectations.

The Royal Humane Society is a British charity which promotes lifesaving intervention. It was founded in England in 1774 as the Society for the Recovery of Persons Apparently Drowned, for the purpose of rendering first aid in cases of near drowning.

Joe Madison Jackson served as a career officer in the United States Air Force and received the Medal of Honor for heroism above and beyond the call of duty during the Vietnam War. On 12 May 1968, he volunteered for a dangerous impromptu rescue of three remaining Air Force members trapped at an overrun Army Special Forces camp. While the camp was still under heavy enemy fire from North Vietnamese and Viet Cong troops, he skillfully piloted his C-123 cargo plane and rescued the three men.

Patrick Henry Brady, is a retired United States Army major general. While serving as a helicopter pilot in the Vietnam War, he received the Medal of Honor, the nation's highest military decoration for valor.

Alexander Noble Hall, sometimes known as Sandy Hall, was a Scottish-Canadian professional footballer who played as a centre forward in the Scottish League for Dunfermline Athletic, Dundee, Motherwell and St Bernard's. He was a part of Canada's gold medal-winning 1904 Olympic team and finished the tournament as joint-top scorer, with three goals. The goals came in the form of a hat-trick in a 7–0 win over the United States, represented by Christian Brothers College.

The Carnegie Hero Fund Trust is a Scottish charity. It was established in 1908 as a British extension to the Carnegie Hero Fund Commission which had been founded in 1904 in Pittsburgh, Pennsylvania. The Trust was founded upon a financial endowment from the Scottish philanthropist and steel magnate Andrew Carnegie. The purpose of the Trust is to provide payments to individuals who have been injured or financially disadvantaged as a result of undertaking an act of heroism or in fatal cases to provide for the family or other dependants. This has continued to be the aim of the Trust which each year considers around twelve cases of heroism within a geographical area encompassing Great Britain, Ireland, the Channel Islands and the surrounding territorial waters.

The United States' Federal Bureau of Investigation instituted an Honorary Medals Program in 1989 as a way of recognizing "exceptional acts" by FBI employees and other law enforcement personnel working with the FBI. These medals were created to supplement the then-existing reward system within the Bureau. There are four medals in the program intended for personnel: the FBI Star, the FBI Medal for Meritorious Achievement, the FBI Shield of Bravery, and the FBI Medal of Valor. One additional medal, the FBI Memorial Star, is for a surviving relative when a death has occurred in the line of duty. These medals are considered to be among the highest honors granted by the FBI, and fewer than 400 had been awarded as of March 2009.

Alexander Gordon Lyle was an officer in the United States Navy who received the Medal of Honor for his actions during World War I. He is one of only three dental officers to have received the medal, the others being Weedon Osborne and Ben L. Salomon.

The British Hero of the Holocaust award is a special national award given by the government of the United Kingdom in recognition of British citizens who assisted in rescuing victims of the Holocaust. On 9 March 2010, it was awarded to 25 individuals posthumously. The award is a solid silver medallion and bears the inscription "in the service of humanity" in recognition of "selfless actions" which "preserved life in the face of persecution".

Sergeant Bernard "Barney" Taylor was an American soldier in the U.S. Army who served with the 5th U.S. Cavalry during the Apache Wars. He was one of three men received the Medal of Honor for gallantry, Taylor rescuing wounded commander Lieutenant Charles King, while battling the Western Apache near Sunset Pass in Arizona on November 1, 1874. He died two days after receiving the award.

The Secretary of the Army Award for Valor was established 15 April 2002, to acknowledge acts of heroism or bravery connected with an Army employee or Army activity, or that in some way benefits the Army. The performance of the act must be evidenced by voluntary action above and beyond the call of duty. The equivalent military decoration for this award is the Soldier's Medal.

The Harwick Mine disaster was a mining accident on January 25, 1904 in Cheswick, Pennsylvania, some sixteen mi (26 km) north of Pittsburgh in the western part of the state. The blast killed an estimated 179 miners and 2 aid workers. The disaster ranks among the ten worst coal mining disasters in American history. One community especially impacted was the Hungarian community in Homestead, Pennsylvania. Fifty-eight of the members of the First Hungarian Reformed Church of Homestead—a full third of the congregation—died in the explosion.

William Shemin was a Sergeant in the U.S. Army during World War I. He was awarded the Medal of Honor for bravery in action at Vesle River, near Bazoches, France. On June 2, 2015, Elsie Shemin-Roth and her sister Ina Bass accepted the nation's highest military award for valor on behalf of their father from President Barack Obama at the White House. Shemin was assigned to Company G, 47th Infantry Regiment, 4th Infantry Division, American Expeditionary Force.

Robert Salvador is a retired Philippine Army officer and a recipient the Philippines' highest military award for courage, the Medal of Valor.

Wikisource has the text of the 1920 Encyclopedia Americana article Carnegie Hero Fund .
This page is based on this Wikipedia article
Text is available under the CC BY-SA 4.0 license; additional terms may apply.
Images, videos and audio are available under their respective licenses.