Scarlett (Tatum O'Neal) is a hardened street kid who supports herself with prostitution and drug dealing. Facing charges of killing a client, Scarlett is brought to court. At court, she briefly encounters Tracy Freeman (Irene Cara). Tracy, a doctor's daughter, has been arrested for drug possession and resisting arrest. Tracy admits to using racial slurs against the white officer who arrested her, implying that he also used racial slurs toward her.

Scarlett and Tracy, along with all the others in the courtroom, escape. The police, not knowing that Scarlett and Tracy were not involved in the shooting, pursue them. The two girls eventually take refuge in the sewer. Tracy wants to turn back; Scarlett on the other hand refuses, convinced that they will be blamed and wanting to avoid prosecution for her crimes. She bullies Tracy into continuing.

The two hail a cab to the derelict section of town. Scarlett attempts to ditch Tracy. Tracy refuses to be left as she does not know where she is and is unwilling to call her father for help. Scarlett threatens Tracy with a broken bottle and insults Tracy with a racial slur. Tracy slams Scarlett into a wall and insists that Scarlett help her find a place to clean herself up.

Scarlett takes her to the apartment of Sniffer (Nicholas Campbell), a casual boyfriend of hers who produces pornography and sells drugs. Scarlett convinces Sniffer to allow Tracy to shower. While Tracy bathes, Scarlett and Sniffer argue, with Sniffer admitting to having set her up with the man that she was accused of killing. Scarlett then tries to convince Sniffer to run off with her. Sniffer becomes angry, pulls a knife on Scarlett, and throws her out of his apartment. Sniffer then attempts to rape Tracy in the shower. She fights him off, rendering him unconscious.

Scarlett then goes to yet another boyfriend, Rodney (Peter Fonda), seeking help. Not only does he refuse, he ends up slicing her face with a knife.

Meanwhile, Lt. Speier makes an arrangement with Rodney; if he assists in Scarlett and Tracy's apprehension, four of his criminal associates will be released from jail. At this point, Rodney sends a few of his henchmen to Sniffer's apartment.

Scarlett then returns to Sniffer's apartment where she is confronted by an angry Tracy who has found a gun in the apartment. Scarlett falsely accuses Sniffer of cutting her face and steals Sniffer's drugs. Scarlett then urges Tracy to flee with her.

The two girls end up in a drug den, an abandoned warehouse, where Scarlett attempts to sell the drugs she stole from Sniffer. While Scarlett negotiates a drug deal, an exhausted Tracy lies down and attempts to sleep. Sniffer, who has trailed the girls to the drug den, comes upon Tracy and injects her with drugs. Outside, Rodney's henchman set fire to the drug den as they are unwilling to enter.

Scarlett successfully negotiates the deal and encounters a gun-wielding Sniffer. The two fight as the fire begins to burn. Sniffer eventually burns to death in the fire. Scarlett rescues a drug addled Tracy from the warehouse before it is consumed by the fire.

The girls take refuge in a junk yard. Scarlett goes out to get food for the two of them while Tracy recovers from her high. Having stolen a newspaper, Scarlett has Tracy read the headline proclaiming their deaths to her.

The girls rejoice in their new found freedom. Tracy then suggests that she and Scarlett run to the mountains, seek employment as waitresses and set up house together. Scarlett reluctantly refuses and the girls argue. The two part ways.

At that moment, the police, who had the newspaper headline published as a ruse, and Tracy's father arrive on the scene. Scarlett is shot as she attempts to flee but is not seriously injured. The girls then pledge to stick together "even if it kills us."

On Metacritic the film has a weighted average score of 4 out of 100, based on 4 critics, indicating "Overwhelming Dislike". [2] Richard Christiansen, Entertainment Editor of the Chicago Tribune, noted the similarity of the film's plot to The Defiant Ones and gave it only 1/2 star, calling it "basically, fundamentally, absolutely garbage." [3]

K-9 is a 1989 American buddy cop action-comedy film starring Jim Belushi and Mel Harris. It was directed by Rod Daniel, written by Steven Siegel and Scott Myers, produced by Lawrence Gordon and Charles Gordon, and released by Universal Pictures. 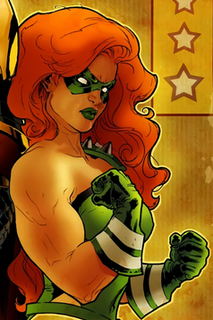 Knockout is a fictional character, a supervillainess in the DC Comics universe. She first appeared in Superboy #1, and was created by Karl Kesel and Tom Grummett. 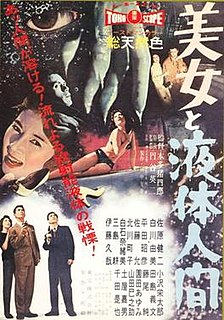 The H-Man is a Japanese science fiction and thriller film.

Larry Davis or, since 1989, Adam Abdul-Hakeem was an American man, convicted in 1991 of a drug dealer's 1986 murder, known for his 1986 shootout in the Bronx with police, in which six officers were shot. Davis, asserting self-defense, was acquitted of all charges aside from illegal gun possession. In 2008, he died via stabbing by a fellow inmate.

"Strange Attractors" is the sixth episode of the fourth season of the NBC superhero drama series Heroes and sixty-fifth episode overall. The episode aired on October 26, 2009. 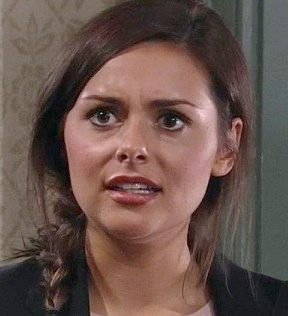 Just You and Me, Kid is a 1979 American comedy film starring George Burns, Brooke Shields, Lorraine Gary, Ray Bolger, Leon Ames, Carl Ballantine, Keye Luke and Burl Ives. It was directed by Leonard B. Stern and was released in July 1979 by Columbia Pictures.

"Enter Batgirl, Exit Penguin", is the first episode of Season 3 of the Batman television series', first aired on ABC September 14, 1967 as its ninety-fifth episode. It guest starred Burgess Meredith as The Penguin, and also was the first appearance of Yvonne Craig as Police Commissioner Gordon's daughter, Barbara Gordon, a.k.a. Batgirl.

Tracy Strauss, portrayed by Ali Larter, is a fictional character on the NBC superhero drama series Heroes. She has the ability to freeze anything that she touches. As the series progresses, her ability evolved to include water mimicry. Introduced in the third season, she is an adviser to the governor of New York who recruits Nathan Petrelli as a senator. She is the triplet sister of Niki Sanders and Barbara, all three having been genetically modified by Dr. Zimmerman and separated at birth. She is also a biological aunt of Micah Sanders. According to writers Joe Pokaski and Aron Coleite, Niki was written out of the series and replaced with Tracy so that Larter could play a different role, as they realized that they could not go further with the character. The change also allowed them to tell an origin story, where the character discovers that she has powers.

Sworn Brothers is a 1987 Hong Kong action crime drama film directed by David Lai and starring Andy Lau and Cheung Kwok-keung as step brothers on the opposite sides of the law as a triad and cop respectively.

On July 11, 2016, Larry Darnell Gordon, an inmate, opened fire on the third floor of the Berrien County Courthouse in St. Joseph, Michigan, killing two bailiffs and injuring a sheriff's deputy. Gordon, who was facing a multitude of charges that carried a possible life sentence, was being taken to a holding cell following a courthouse hearing when he disarmed an officer and attempted to take hostages. Moments after taking hostages, other court officers shot and killed Gordon.

Kolamaavu Kokila aka CoCo is a 2018 Indian Tamil-language black comedy crime film written and directed by debutant Nelson Dilipkumar and produced by Lyca Productions. The film stars Nayanthara in the lead role alongside a supporting cast including Yogi Babu, Saranya Ponvannan, R. S. Shivaji, Charles Vinoth, and Hareesh Peradi. Anirudh Ravichander composed the film's music. The film, which was also released in Telugu as "Ko Ko Kokila". A Hindi remake of the film, Good Luck Jerry is being produced by Aanand L. Rai starring Janhvi Kapoor, who is reprising the role played by Nayanthara. The film was released on 17 August 2018 to positive response and became a commercial success.

On September 6, 2018, off-duty Dallas Police Department patrol officer Amber Guyger entered the Dallas, Texas, apartment of 26-year-old accountant Botham Jean and fatally shot him. Guyger said that she had entered the apartment believing it was her own and that she shot Jean believing he was a burglar. Guyger was not arrested for several days, and then only charged with manslaughter, creating mistrust in the process and outrage over the killing of an unarmed black citizen. This resulted in protests and accusations of racial bias. Two months later, the charge was upgraded to murder. Over a year later, on October 1, 2019, Guyger was found guilty of murder. The next day, she received a sentence of ten years in prison.

Force of Nature is a 2020 American action film directed by Michael Polish from a screenplay by Cory Miller. It stars Emile Hirsch, Kate Bosworth, Mel Gibson, David Zayas, Stephanie Cayo, Will Catlett, Swen Temmel, Tyler Jon Olsen, and Jorge Luis Ramos, and follows a gang of thieves in Puerto Rico who plan on executing a heist during a hurricane.

Breonna Taylor, a 26-year-old African-American woman, was fatally shot in her Louisville, Kentucky, apartment on March 13, 2020, when white plainclothes officers Jonathan Mattingly, Brett Hankison, and Myles Cosgrove of the Louisville Metro Police Department (LMPD) forced entry into the apartment as part of an investigation into drug dealing operations. Taylor's boyfriend, Kenneth Walker, was inside the apartment with her when the officers knocked on the door and then forced entry. Officers said that they announced themselves as police before forcing entry, but Walker said he did not hear any announcement, thought the officers were intruders, and fired a warning shot at them. According to officials, it hit Mattingly in the leg, and the officers fired 32 shots in return. Walker was unhurt but Taylor was hit by six bullets and died. According to police, Taylor's home was never searched.