Champs is an American sitcom that aired from January 9 until August 7, 1996.

The series is about five friends 20 years after they won a high school basketball championship together. [1] 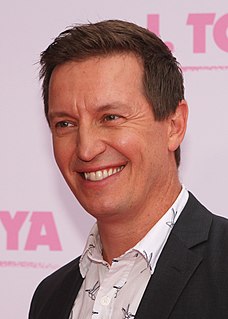 John Henry Michael McManus, better known by the stage name Rove McManus, is an Australian triple Gold Logie award-winning comedian, television and radio presenter, producer and media personality living in Sydney. He was the host of the eponymous variety show Rove and was also the host of the comedy talk show Rove LA. He is the co-owner of the production company Roving Enterprises with partner Craig Campbell. He hosts Whovians on the ABC.

Michelle McManus is a Scottish singer, columnist, and television presenter who won the second and final series of the UK talent show Pop Idol in 2003.

Mark McManus was a Scottish actor. He was best known for playing the tough Glaswegian Detective Chief Inspector Jim Taggart in the long-running STV television series Taggart from 1983 until his death in 1994.

Manus Boonjumnong is a Thai boxer who won the Olympics at Light Welterweight (60–64 kg) at the 2004 Summer Olympics. He is the older brother of Non Boonjumnong.

Shaun John McManus is a former Australian rules footballer. He is one of the most popular players to ever represent the Fremantle Football Club in the Australian Football League (AFL) and is often seen as an icon or favourite son of the club. He has been described as the AFL's uphill skiing champion due to his courage, persistence and resilience in overcoming two knee reconstructions. 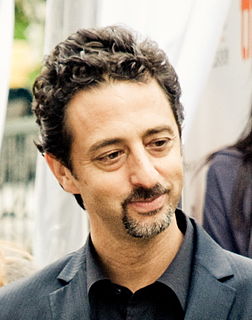 Grant Heslov is an American actor, film producer, screenwriter and director, known for his producing and writing collaborations with George Clooney, which have earned him four Oscar nominations. As a co-producer of Argo (2012), he received the Academy Award for Best Picture in 2013. As an actor, he has appeared in films including True Lies (1994), Black Sheep (1996), Enemy of the State (1998) and The Scorpion King (2002), as well as performing supporting roles in several films made with Clooney.

The 1st Emmy Awards, retroactively known as the 1st Primetime Emmy Awards after the debut of the counterpart Daytime Emmy Awards, were presented at the Hollywood Athletic Club in Los Angeles on Tuesday, January 25, 1949. Only shows produced in Los Angeles County, California and aired in the Los Angeles media market were eligible to win. The awards were hosted by Walter O'Keefe who substituted for Rudy Vallée when he had to leave town at the last minute. A special award category was introduced and awarded to Louis McManus for designing the actual Emmy Award statuette.

Thomas Moore was a British professional wrestler, best known by his ring name Jack Dempsey, who was active in North American and European regional promotions from the 1930s to the 1960s.

The 1988 Sunkist Fiesta Bowl was the 17th edition of the college football bowl game played at Sun Devil Stadium in Tempe, Arizona on Friday, January 1. Part of the 1987–88 bowl game season, it matched the third-ranked independent Florida State Seminoles and the #5 Nebraska Cornhuskers of the Big Eight Conference. Favored Florida State rallied to win 31–28.

Michaela McManus is an American actress, known for her portrayals of Lindsey Strauss on One Tree Hill, A.D.A. Kim Greylek on Law & Order: Special Victims Unit, and Grace Karn on the NBC drama Aquarius.

Rove LA is an Australian television comedy talk show which debuted on Fox8 on 19 September 2011. The show is hosted by Rove McManus and is set in Los Angeles. The show is presented in a similar fashion to McManus' previous talk show Rove, featuring comedy segments and interviews with celebrity guests. The show was picked up for a two-year run on the Fox8 subscription channel.

Exchange Student Zero is an Australian television film that premiered on 16 December 2012 on Cartoon Network. Created by Bruce Kane with Maurice Argiro and produced by Bogan Entertainment Solutions, in association with Cartoon Network Asia Pacific, it is the first local animated made production to be commissioned by the channel.

Twelfth Night is a 1966 Australian TV version of the play by William Shakespeare. Directed by Ken Hannam, it stars Roger Climpson and Helen Morse.

Sara McManus is a Swedish curler from Gävle. She currently plays third on Team Anna Hasselborg. With the Hasselborg rink, she won the gold medal in women's curling at the 2018 Winter Olympics.

James Hilton McManus is a badminton player from South Africa. He won silver at African Badminton Championships with his partner, Andries Malan.

Catch-22 is a satirical dark comedy miniseries based on the 1961 novel of the same name by Joseph Heller. It premiered on May 17, 2019, on Hulu in the United States. The series stars Christopher Abbott, Kyle Chandler, Hugh Laurie, and George Clooney, who is also an executive producer alongside Grant Heslov, Luke Davies, David Michôd, Richard Brown, Steve Golin, and Ellen Kuras. The series was written by Davies and Michôd and directed by Clooney, Heslov, and Kuras, with each directing two episodes.