Chanking is a guitar performance technique in funk music that involves both "choking" the guitar neck and strumming the strings percussively to create a distinctive-sounding riff commonly associated with the genre. [1] The technique was popularized by the music of James Brown, later spreading to other genres and performers.

The name "chanking" is either a portmanteau of the words "choking" and "yanking", referring to the procedure involved in the technique, or simply onomatopoeia - a word that sounds like what it describes.

Chanking was developed by James Brown band guitarist Jimmy Nolen as a part of his signature "chicken scratch" sound. The technique appeared first with a double-chank on the first backbeat of each bar in "Out of Sight" (1964), [2] and in "Papa's Got a Brand New Bag" (1965), a song that typified much of Brown's subsequent work. [3] "Chicken scratching" itself differs slightly: the fretting hand lightly squeezes the chord on the neck, then releases suddenly to produce a scratch chord. [4] In particular, Brown used chanking against syncopated bass to produce a unique blend of sounds. [1]

The technique of chanking spread from funk to reggae music. [3] [5] Alan Warner, then of The Foundations, also utilized the technique, which left its sound legacy in Europop. [5]

Funk is a music genre that originated in African American communities in the mid-1960s when musicians created a rhythmic, danceable new form of music through a mixture of soul, jazz, and rhythm and blues (R&B). Funk de-emphasizes melody and chord progressions and focuses on a strong rhythmic groove of a bassline played by an electric bassist and a drum part played by a drummer, often at slower tempos than other popular music. Like much of African-inspired music, funk typically consists of a complex groove with rhythm instruments playing interlocking grooves that create a "hypnotic" and "danceable" feel. Funk uses the same richly colored extended chords found in bebop jazz, such as minor chords with added sevenths and elevenths, or dominant seventh chords with altered ninths and thirteenths. 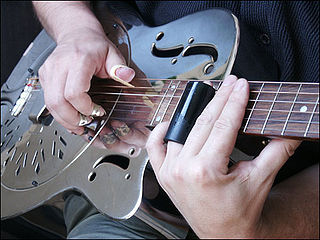 Slide guitar is a technique for playing the guitar that is often used in blues music. It involves playing a guitar while holding a hard object against the strings, creating the opportunity for glissando effects and deep vibratos which reflect characteristics of the human singing voice. It typically involves playing the guitar in the traditional position with the use of a slide fitted on one of the guitarist's fingers. The slide may be a metal or glass tube, such as the neck of a bottle. The term bottleneck was historically used to describe this type of playing. The strings are typically plucked while the slide is moved over the strings to change the pitch. The guitar may also be placed on the player's lap and played with a hand-held bar. 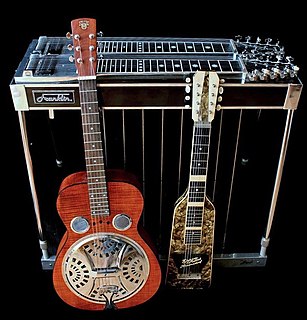 A steel guitar is any guitar played while moving a steel bar or similar hard object against plucked strings. The bar itself is called a "steel" and is the source of the name "steel guitar". The instrument differs from a conventional guitar in that it does not use frets; conceptually, it is somewhat akin to playing a guitar with one finger. Known for its portamento capabilities, gliding smoothly over every pitch between notes, the instrument can produce a sinuous crying sound and deep vibrato emulating the human singing voice. Typically, the strings are plucked by the fingers of the dominant hand, while the steel tone bar is pressed lightly against the strings and moved by the opposite hand. 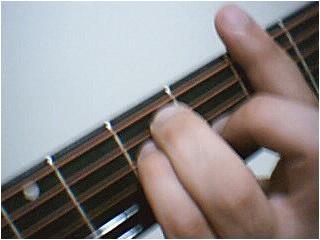 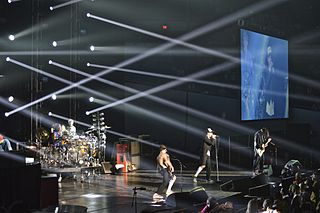 Jimmy Nolen was an American guitarist, known for his distinctive "chicken scratch" lead guitar playing in James Brown's bands. In its survey of "The 100 Greatest Guitarists of All Time," the English magazine Mojo ranks Nolen number twelve.