Playing a string harmonic is a string instrument technique that uses the nodes of natural harmonics of a musical string to isolate overtones. Playing string harmonics produces high pitched tones, often compared in timbre to a whistle or flute. [1] [2] Overtones can be isolated "by lightly touching the string with the finger instead of pressing it down" against the fingerboard (without stopping). [3]

The nodes of natural harmonics are located at the following points along the string:

Above, the length fraction is the point, with respect to the length of the whole string, the string is lightly touched. It is expressed as a fraction n/m, where m is the mode (2 through 16 are given above), and n the node number. The node number for a given mode can be any integer from 1 to m − 1. However, certain nodes of higher harmonics are coincident with nodes of lower harmonics, and the lower sounds overpower the higher ones. For example, mode number 4 can be fingered at nodes 1 and 3; it will occur at node 2 but will not be heard over the stronger first harmonic. Ineffective nodes to finger are not listed above.

The fret number, which shows the position of the node in terms of half tones (or frets on a fretted instrument) then is given by:

With s equal to the twelfth root of two, notated s because it's the first letter of the word "semitone".

When a string is only lightly pressed by one finger (that is, isolating overtones of the open string), the resulting harmonics are called natural harmonics. However, when a string is held down on the neck in addition to being lightly pressed on a node, the resulting harmonics are called artificial harmonics. In this case, as the total length of the string is shortened, the fundamental frequency is raised, and the positions of the nodes shift accordingly (that is, by the same number of frets), thereby raising the frequency of the overtone by the same interval as the fundamental frequency.

Artificial harmonics are produced by stopping the string with the first or second finger, and thus making an artificial 'nut,' and then slightly pressing the node with the fourth finger. By this means harmonics in perfect intonation can be produced in all scales.

Artificial harmonics are more difficult to play than natural harmonics, but they are not limited to the overtone series of the open strings, meaning they have much greater flexibility to play chromatic passages. Unlike natural harmonics, they can be played with vibrato. [6]

There are a few harmonic techniques unique to guitar.

A pinch harmonic (also known as squelch picking, pick harmonic or squealy) is a guitar technique to achieve artificial harmonics in which the player's thumb or index finger on the picking hand slightly catches the string after it is picked, [10] canceling (silencing) the fundamental frequency of the string, and letting one of the overtones dominate. This results in a high-pitched sound which is particularly discernible on an electrically amplified guitar as a "squeal".

Tapped harmonics were popularized by Eddie van Halen. This technique is an extension of the tapping technique. The note is fretted as usual, but instead of striking the string the excitation energy required to sound the note is achieved by tapping at a harmonic nodal point. The tapping finger bounces lightly on and off the fret. The open string technique can be extended to artificial harmonics. For instance, for an octave harmonic (12-fret nodal point) press at the third fret, and tap the fifteenth fret, as 12 + 3 = 15.

This technique is used by effect devices producing a magnetic field that can agitate fundamentals and harmonics of steel strings. There are harmonic mode switches as provided by newer versions of the EBow and by guitar build in sustainers like the Fernandes Sustainer and the Moog Guitar. Harmonics control by harmonic mode switching and by the playing technique is applied by the Guitar Resonator where harmonics can be alternated by changing the string driver position at the fretboard while playing.

A harmonic series is the sequence of frequencies, musical tones, or pure tones in which each frequency is an integer multiple of a fundamental. 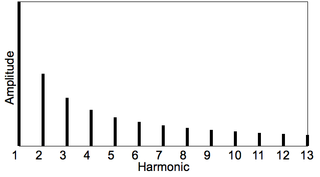 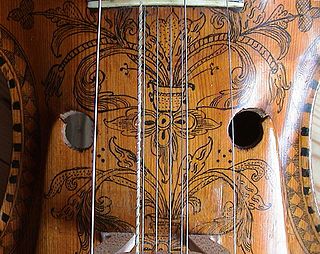 A node is a point along a standing wave where the wave has minimum amplitude. For the instance, in a vibrating guitar string, the ends of the string are nodes. By changing the position of the end node through frets, the guitarist changes the effective length of the vibrating string and thereby the note played. The opposite of a node is an anti-node, a point where the amplitude of the standing wave is at maximum. These occur midway between the nodes.

Playing the violin entails holding the instrument between the jaw and the collar bone.. The strings are sounded either by drawing the bow across them (arco), or by plucking them (pizzicato). The left hand regulates the sounding length of the strings by stopping them against the fingerboard with the fingers, producing different pitches.

Javārī, in Indian classical music refers to the overtone-rich "buzzing" sound characteristic of classical Indian string instruments such as the tanpura, sitar, surbahar, rudra veena and Sarasvati veena. Javari can refer to the acoustic phenomenon itself and to the meticulously carved bone, ivory or wooden bridges that support the strings on the sounding board and produce this particular effect. A similar sort of bridge is used on traditional Ethiopian lyres, as well as on the ancient Greek kithara, and the "bray pins" of some early European harps operated on the same principle. A similar sound effect, called in Japanese sawari, is used on some traditional Japanese instruments as well.

Harmonic usually refers to the frequency components of a time-varying signal, such as a musical note.

The scale of harmonics is a musical scale based on the noded positions of the natural harmonics existing on a string. This musical scale is present on the guqin, regarded as one of the first string instruments with a musical scale. Most fret positions appearing on Non-Western string instruments (lutes) are equal to positions of this scale. Unexpectedly, these fret positions are actually the corresponding undertones of the overtones from the harmonic series. The distance from the nut to the fret is an integer number lower than the distance from the fret to the bridge. 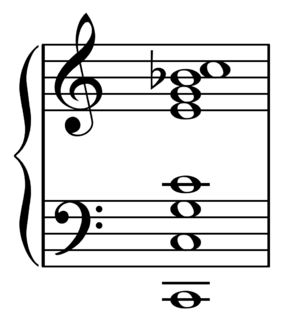