This is a list of Wikipedia articles about brand-name companies (past and present) that have sold guitars, and the house brands occasionally used.

James L. D'Aquisto was an Italian–American luthier who concentrated on building and repairing archtop guitars. He served as an apprentice to John D'Angelico beginning in 1952 and later developed his own distinctive style.

John D'Angelico was a luthier from New York City, noted for his handmade archtop guitars and mandolins. He founded the D'Angelico Guitars company, where other notable luthiers like Jimmy D'Aquisto served as apprentices.

Vintage Guitar is an American magazine that focuses on vintage and classic guitars, amplifiers, effects, and related equipment, as well as notable guitarists from all genres and eras. The publication's feature stories and monthly columns cover a diverse range of topics by contributors, including some of the biggest names in the industry and renowned authorities like Dan Erlewine, George Gruhn, Wolf Marshall, Richard Smith, and Seymour W. Duncan, as well as some of the best-known writers in the field, including Walter Carter, A. R. Duchoissoir, Dan Forte, Lisa Sharken, Rich Kienzle, Michael Dregni, John Heidt, John Peden, Greg Prato, and others.

Stella was an American guitar brand owned by the Oscar Schmidt Company. It was founded around 1899. The Stella brand consists of low and mid-level stringed instruments.

The 1949 King's Birthday Honours were appointments by many of the Commonwealth Realms of King George VI to various orders and honours to reward and highlight good works by citizens of those countries. The appointments were made "on the occasion of the Celebration of His Majesty's Birthday", and were published in supplements to the London Gazette of 3 June 1949 for the British Empire, New Zealand, India and Ceylon. 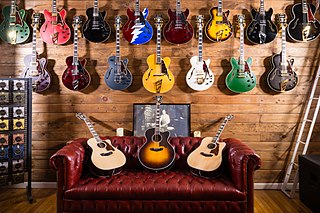 D'Angelico Guitars of America is an American musical instrument manufacturer based in Manhattan, New York. The brand was initially founded by master-luthier John D'Angelico in 1932, in Manhattan's Little Italy. In 1999, Steve Pisani, John Ferolito Jr., and Brenden Cohen purchased the D'Angelico Guitars trademark. Cohen serves as the brand's President and CEO. Original D'Angelico guitars are collector's items and have been used by musicians including Pete Townshend, Eric Clapton, Bucky Pizzarelli, Chet Atkins, and Chuck Wayne. And the D'Angelico Mel Bay New Yorker model was featured on the cover of the Mel Bay Publications' guitar method books for decades.

The 1942 New Year Honours were appointments by King George VI to various orders and honours to reward and highlight good works by citizens of the United Kingdom and British Empire. They were announced on 30 December 1941.

This list of songs or music-related items is incomplete; you can help by expanding it.
This page is based on this Wikipedia article
Text is available under the CC BY-SA 4.0 license; additional terms may apply.
Images, videos and audio are available under their respective licenses.