The current building was erected in the 12th century at the site of an earlier 6th century church founded by Saint Brendan, which was associated with a monastery he founded and at which he was buried. The Dean of the Cathedral is the Very Reverend Gary Paulsen who is also Dean of Killaloe, Dean of Kilfenora and both Dean and Provost of Kilmacduagh.

Description of the cathedral

The earliest part of the church dates back to around 1180. [1] Its doorway is the crowning achievement of Hiberno-Romanesque style. It is in six orders, and has a large variety of motifs, animal heads, foliage, human heads etc. Above the doorway is a pointed hood enclosing triangles alternating with bizarre human heads, and below this is an arcade enclosing more human heads. The early 13th century east windows in the chancel is an example of a late Romanesque windows. The chancel arch was inserted in the 15th century, and is decorated with angels, a rosette and a mermaid carrying a mirror. The supporting arches of the tower at the west end of the church are also decorated with 15th century heads, and the innermost order of the Romanesque doorway was also inserted at this time. The sacristy is also 15th century. The church had a Romanesque south transept, which is now in ruins, and a Gothic north transept, which has been removed. In the Roman Catholic church one mile to the south is a 14th-century wooden statue of the Madonna and Child, and on the roadside near this church is a 16th-century tower-house.[ citation needed ]

Clonfert Cathedral was included in the 2000 World Monuments Watch by the World Monuments Fund. The soft sandstone structure had weathered severely, and prior conservation efforts, which did not fully address all the building's problems, as well as substantial biological growth, had compounded the deterioration. Due to the limited resources of the dwindling congregation, American Express provided financial assistance through the organization. [2]

Clonfert in the Annals

Killaloe is a large village in east County Clare, Ireland. The village lies on the River Shannon on the western bank of Lough Derg and is connected by Killaloe Bridge to the "twin town" of Ballina on the eastern bank of the lake.

Rosscarbery is a town in County Cork, Ireland. The town is on a shallow estuary, which opens onto Rosscarbery Bay. Rosscarbery is in the Cork South-West constituency, which has three seats. 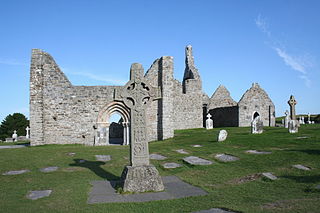 The monastery of Clonmacnoise, meaning "Meadow of the Sons of Nós", is situated in County Offaly, Ireland on the River Shannon south of Athlone.

Fedelmid mac Crimthainn was the King of Munster between 820 and 846. He was numbered as a member of the Céli Dé, an abbot of Cork Abbey and Clonfert Abbey, and possibly a bishop. After his death, he was later considered a saint in some martyrologies. 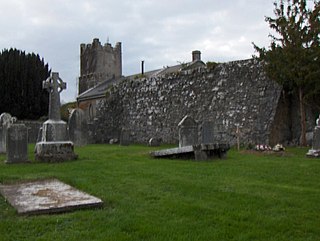 Terryglass is a village in County Tipperary, Ireland. The small town is located on the R493 regional road on the north-eastern shore of Lough Derg near where the River Shannon enters the Lough. It is a civil parish in the historical barony of Ormond Lower. It is also an Ecclesiastical parish in the Roman Catholic Diocese of Killaloe,. Terryglass won the Irish Tidy Towns Competition in 1983 and 1997.

Cumméne Fota or Fada, anglicised Cummian, was an Irish bishop.

Emly or Emlybeg or The Marsh is a village in County Tipperary, Ireland. It is a civil parish in the historical barony of Clanwilliam. It is also an Ecclesiastical parish in the Roman Catholic Archdiocese of Cashel and Emly.

Eóganacht Chaisil were a branch of the Eóganachta, the ruling dynasty of Munster during the 5th-10th centuries. They took their name from Cashel which was the capital of the early Catholic kingdom of Munster. They were descended from Óengus mac Nad Froích, the first Christian King of Munster, through his son Feidlimid mac Óengusa.

Cathal Maenmaighe was the 19th King of Uí Maine.

Seanach Garbh was Abbot of Clonfert.

The Abbot of Clonfert was the monastic head of the abbey of Clonfert in County Galway, Ireland. The abbey was founded by Saint Brendan in the early sixth century. The abbots also bore the title "Comarbai Brénaind", "successor of Saint Brendan".

Cétadach was the 31st Abbot of Clonmacnoise. He died in 848.