The vision for the school was set out in the will of William Conolly:

"to be laid out by them a convenient building in or near to the town of Celbridge in the county of Kildare on such spot of ground as shall be set out for them for that purpose by my said dear wife and nephew for the reception of forty orphans or other poor children.”

The building is of Georgian architecture and its most characteristic feature is the triple gates. It was designed by architect Thomas Burgh who also built the Royal Barracks and famous library building at Trinity College both in Dublin on fifty acres of land to accommodate forty female who were to be "lodged, clothed and dieted" there. The aim of this charity school was to rescue children of the "poor natives from ignorance and superstition” and instruct them in “the English tongue, in manners and in the Protestant faith. “ Students were employed on the farm and they carried on linen and hempen manufacture through all stages from seed, to loom, to bleaching. In 1837 one hundred students attended, thirty of whom were nominated by Edward Conolly. At the time of Lady Louisa's death it had 600 pupils, It served as a boarding school for Protestant girls until 1973. when the Incorporated Society for Promoting Protestant Schools in Ireland closed the school and transferred the pupils to Kilkenny. [1] The building reopened as the Setanta Hotel on January 25, 1980.

Emily FitzGerald, Duchess of Leinster, known before 1747 as Lady Emily Lennox, from 1747 to 1761 as The Countess of Kildare and from 1761 to 1766 as The Marchioness of Kildare, was the second of the famous Lennox sisters, daughters of Charles Lennox, 2nd Duke of Richmond and his wife Sarah Cadogan. 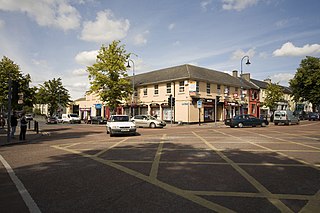 Maynooth is a university town in north County Kildare, Ireland. It is home to Maynooth University and St Patrick's College, a Pontifical University and Ireland's main Roman Catholic seminary. Maynooth is also the seat of the Irish Catholic Bishops' Conference and holds the headquarters of Ireland's largest development charity, Trócaire. Maynooth is located 24 kilometres west of central Dublin. 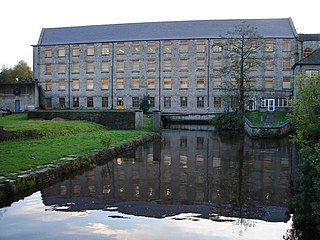 Straffan is a village in County Kildare, Ireland, situated on the banks of the River Liffey, 25 km upstream of the Irish capital Dublin.

Blessington, historically known as Ballycomeen, is a town on the River Liffey in Wicklow, Ireland, near the border with Kildare. It is around 25 km south-west of Dublin, and is situated on the N81 road, which connects Dublin to Tullow.

Arthur Guinness was an Irish brewer and the founder of the Guinness brewery business and family. He was also an entrepreneur and philanthropist.

Castletown House, Celbridge, County Kildare, Ireland, is a Palladian country house built in 1722 for William Conolly, the Speaker of the Irish House of Commons. It formed the centrepiece of a 550-acre (220 ha) estate. Sold to developers in 1965, the estate is now divided between State and private ownership.

The Kildare County Board of the Gaelic Athletic Association (GAA), or Kildare GAA, is one of 12 county boards governed by the Leinster provincial council of the GAA in Ireland. The county board regulates Gaelic games in County Kildare and is also responsible for the inter-county teams.

The year 1729 in architecture involved some significant events.

Celbridge is a Gaelic Athletic Association club in Celbridge, County Kildare, Republic of Ireland. They were awarded Kildare GAA club of the year in 2008, winners of the Kildare senior football championship of 2008, finalists in the senior football league of 1923, 1988 and 2008 and won the Kildare senior hurling and camogie championships in 2005. The Club have several honours at underage in all three codes, qualifying for national finals in football, hurling and camogie at the 2008 Féile and winning the county under-14 football Féile final for the first time.

Malahide Community School is a co-educational secondary school located in Malahide, County Dublin, Ireland. It welcomes pupils of all religious denominations. The school grew from 512 students in 1976 to 1200 students by 2006, and remains at around 1200 in 2018.

St Audoen's Church is the church of the parish of Saint Audoen in the Church of Ireland, located south of the River Liffey at Cornmarket in Dublin, Ireland. This was close to the centre of the medieval city. The parish is in the Diocese of Dublin and Glendalough. St Audoen's is the oldest parish church in Dublin and still used as such. There is a Roman Catholic church of the same name adjacent to it.

Industrial Schools were established in Ireland under the Industrial Schools Act of 1868 to care for "neglected, orphaned and abandoned children". By 1884, there were 5,049 children in such institutions throughout the country. 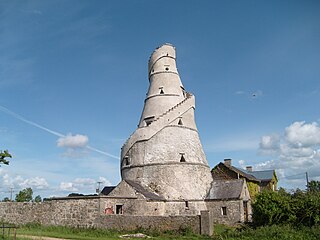 Leixlip is a town in north-east County Kildare, Ireland, near Dublin. Its location on the confluence of the River Liffey and the Rye Water has marked it as a frontier town historically: on the border between the ancient kingdoms of Leinster and Brega, as an outpost of The Pale, and on Kildare's border with County Dublin.

Katherine Conolly was an Irish political hostess, landowner, and philanthropist.