Note: Colorado's local law enforcement, emergency management, fire, and criminal justice agencies operate with home-rule authority; while local jurisdictions often partner with and work closely with CDPS agencies, they are not overseen by the Department of Public Safety. If you have a question or concern about municipal or county safety services, you may need to contact your local jurisdiction.

A state bureau of investigation (SBI) is a state-level detective agency in the United States. They are plainclothes agencies which usually investigate both criminal and civil cases involving the state and/or multiple jurisdictions. They also typically provide technical support to local agencies in the form of laboratory and/or record services, or to directly assist in the investigation of cases at the local agency's request.

In the United States, a department of public safety is a state or local government agency which often has a broad portfolio of responsibilities, which may include some or all of the following:

Public security is the function of governments which ensures the protection of citizens, persons in their territory, organizations, and institutions against threats to their well-being – and to the prosperity of their communities. 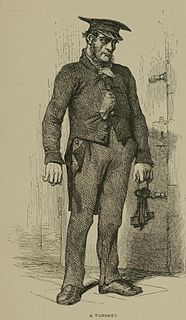 A prison officer or corrections officer is a uniformed official responsible for the custody, supervision, safety, and regulation of prisoners. They are responsible for the care, custody, and control of individuals who have been arrested and are awaiting arraignment or trial or who have been convicted of a crime and sentenced to imprisonment. They are also responsible for the security of the facility and its property. Most prison officers are employed by the government of the jurisdiction in which they operate, although some are employed by private companies that provide prison services to the government.

The Georgia Bureau of Investigation (GBI) is a state-wide investigative law enforcement agency within the U.S. state of Georgia. It is an independent, statewide agency that provides assistance to Georgia's criminal justice system in the areas of criminal investigations, forensic laboratory services and computerized criminal justice information. Its headquarters is located in unincorporated DeKalb County, near Decatur and in Greater Atlanta. 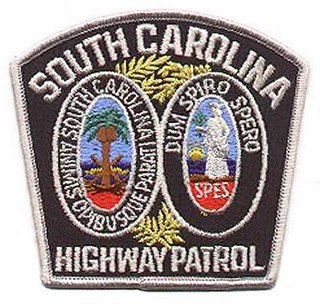 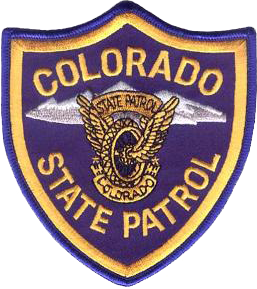 The Arizona Department of Public Safety (AZDPS) is a state-level law enforcement agency with a primary function of patrolling and enforcing state laws on Arizona highways. Director Heston Silbert was promoted from Deputy Director to Director in April 2020 upon the retirement of former Director Frank Milstead. Its headquarters are in Phoenix.

The Wisconsin Department of Justice is a state law enforcement agency with jurisdiction throughout the state of Wisconsin. Its headquarters are in Madison, the state capital, with main offices in the Risser Justice Center in downtown Madison. The Wisconsin Attorney General oversees the agency. The attorney general is Josh Kaul, who was elected to his first four-year term in November, 2018, and assumed the office on January 7, 2019. The WDoJ manages the state's three crime labs, and investigates major crimes involving, among other things, illegal drugs, fugitives, public corruption, official misconduct, organized crime, domestic terrorism, Medicaid fraud and patient abuse.

The Hennepin County Sheriff's Office is the sheriff's office for Hennepin County in the U.S. state of Minnesota. HCSO serves one million residents and is located downtown in the city of Minneapolis, the county seat. The office manages the county jail, patrols waterways, provides security for the District Court, handles home foreclosures, participates in homeland security activities and in law enforcement, and by state law is responsible for handling applications for permits to carry a firearm for residents of Hennepin County.

The government of Arizona is the governmental structure of the state of Arizona as established by the Arizona Constitution. The executive is composed of the Governor, several other statewide elected officials, and the Governor's cabinet. The Arizona Legislature consists of the House of Representatives and Senate. The judiciary is composed of the Arizona Supreme Court and lower courts. There is also local government, consisting of counties, municipalities and special districts.

The Center for Domestic Preparedness is the only U.S. federal facility chartered to provide comprehensive preparedness training programs to the nation's emergency response providers. In 2007, the CDP became part of the Federal Emergency Management Agency. 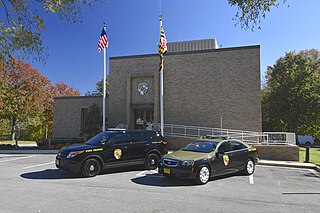 The Rutgers University Police Department (RUPD) is a campus police agency responsible for law enforcement on the New Brunswick, Newark, and Camden campuses of Rutgers University. RUPD is a department of the university's Division of Administration and Public Safety which also houses Rutgers Emergency Services which is responsible for Emergency Medical Services and emergency management on the campus as well as responding to fire and hazardous materials emergencies in coordination with local first responders. The Division of Administration and Public Safety also oversees the campus bus system, the Rutgers Golf Course, and other services on campus.

The Minnesota Department of Public Safety (DPS) is a department of the State of Minnesota in the United States. DPS is an enforcement, licensing and services agency that develops and operates programs in the areas of law enforcement, traffic safety, alcohol and gambling, fire safety, driver licensing, vehicle registration, emergency management and public safety information. The department coordinates the functions and services of the state relating to the safety and convenience of its citizens.