The Colorado Department of Natural Resources is the principal department of the Colorado state government [1] responsible for the development, protection, and enhancement Colorado natural resources for the use and enjoyment of the state's present and future residents, as well as for visitors to the state.

The Department of Natural Resources comprises the following divisions:

It formerly included the Colorado Geological Survey which was spun off and subsequently incorporated into the Colorado School of Mines in 2014.

The Indiana Department of Natural Resources (DNR) is the agency of the U.S. state of Indiana. There are many divisions within the DNR and each has a specific role. The DNR is not only responsible for maintaining resource areas but also manages Indiana's fish and wildlife, reclaims coal mine ground, manages forested areas, aids in the management of wildlife on private lands, enforces Indiana's conservation laws, and many other duties not named here. According to the department's website, their mission is "to protect, enhance, preserve, and wisely use natural, cultural, and recreational resources for the benefit of Indiana's citizens through professional leadership, management, and education".

The Hawaiʻi Department of Land and Natural Resources (DLNR) is a part of the Hawaiʻi state government dedicated to managing, administering, and excerising control over public lands, water resources and streams, ocean waters, coastal areas, minerals, and other natural resources of the state of Hawaiʻi. The mission of the Hawaiʻi Department of Land and Natural Resources is to "enhance, protect, conserve and manage Hawaiʻi's unique and limited natural, cultural and historic resources held in public trust for current and future generations of the people of Hawaiʻi nei, and its visitors, in partnership with others from the public and private sectors." The organization oversees over 1.3 million acres of land, beaches, and coastal waters and 750 miles of coastal land. 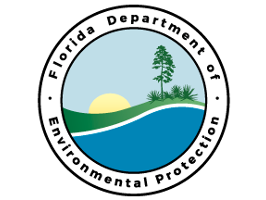 The Florida Department of Environmental Protection (FDEP) is the Florida government agency charged with environmental protection. It is under the nominal control of the governor.

The Ohio Department of Natural Resources (ODNR) is the Ohio state government agency charged with ensuring "a balance between wise use and protection of our natural resources for the benefit of all." ODNR regulates the oil and gas industry, the mining industry, hunting and fishing, and dams, while maintaining natural resources such as state parks, state nature preserves, state wildlife areas, state forests, and state waterways. It was created in 1949 by the Ohio Legislature.

The Wyoming Department of Environmental Quality (DEQ) founded in 1973, is a Wyoming state agency to protect, conserve and enhance the environment of Wyoming "through a combination of monitoring, permitting, inspection, enforcement and restoration/remediation activities". It consists of 6 divisions and since 1992, the Environmental Quality Council (EQC), a separate operating agency of 7 governor-appointed members.

The Montana Department of Natural Resources and Conservation (DNRC) is a government agency in the executive branch state of Montana in the United States with responsibility for ensuring sustainable development of the state's land, mineral, natural gas, oil, timber, water, and other resources.