Boyd Lake State Park is a state park in the U.S. state of Colorado, [1] located north of Loveland, Colorado. The park sometimes holds events for the public including fishing derbies and clinics, education programs, and volunteer projects. Activities permitted within the park include boating, fishing, picnicking, swimming, hiking, biking, and hunting. [2] [3] The park's centerpiece, Boyd Lake, is 1,700 acres (6.9 km2). [4]

Lakeville is the largest city in Dakota County, Minnesota, United States. It is a suburb of Minneapolis-Saint Paul, approximately 20 miles (32 km) south of both downtown Minneapolis and downtown St. Paul along Interstate Highway 35. Lakeville is one of the fastest-growing cities in the Twin Cities area. The U.S. Census Bureau estimated its population to be 67,317 in 2019. 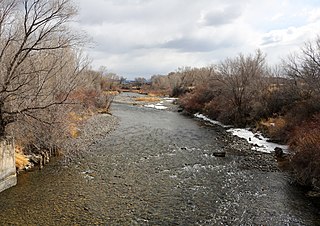 Luke Vercollone is a former American soccer player who previously played for Colorado Springs Switchbacks in the United Soccer League.

The Kinnickinnic River is one of three primary rivers that flows into the harbor of Milwaukee, Wisconsin, at Lake Michigan, along with the Menomonee River and Milwaukee River. It is locally called the "KK River".

The Cochiti Dam is an earthen fill dam located on the Rio Grande in Sandoval County, New Mexico, approximately 50 miles (80 km) north of Albuquerque, New Mexico, in the United States. By volume of material, it is the 23rd largest dam in the world at 62,849,000 yd3 of material, one of the ten largest such dams in the United States, and the eleventh largest such dam in the world. Cochiti Dam is one of the four United States Army Corps of Engineers projects for flood and sediment control on the Rio Grande system, operating in conjunction with Abiquiu Dam, Galisteo Dam and Jemez Canyon Dam.

Kankakee River State Park is an Illinois state park on 4,000 acres (1,619 ha) primarily in Kankakee and Will Counties, Illinois, United States. Originally, 35 acres (14 ha) of land was donated by Ethel Sturges Dummer for the creation of the state park in 1938. Another 1,715 acres (694 ha) was donated by Commonwealth Edison in 1956, which again donated more land in 1989. The islands of Smith, Hoffman, Langham, and Willow are all located inside the park on the Kankakee River.

Shawanaga lake is a lake located in the Municipality of Whitestone, District of Parry Sound, Ontario, Canada.

Chris Derrick is an American distance runner who won 3 consecutive US Cross Country Championships in 2013–15. He attended Stanford University, where he earned 14 All-American honors and hold an American junior record in the 5000 meters.

Runyon Lake is located in Pueblo, Colorado. It was originally used as a dredge pond for the Rocky Mountain Steel Mill, it is approximately 35 acres in size, and is fed by the Arkansas River. 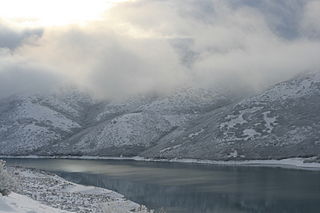 Lake Isabel is a reservoir located in the San Isabel National Forest in Pueblo and Custer counties, in Colorado, United States. The lake is in the Wet Mountains. The lake is open to fishing year round and is regularly stocked by Colorado Parks and Wildlife. Available activities include fishing, hiking, camping and sledding in the winter.

Highline Lake State Park is a Colorado state park. It is home to two lakes, the Highline Lake and the Mack Mesa Lake. It is well known for its birdwatching opportunities and has two wildlife migratory waterfowl overlook kiosks where it is possible to watch Great blue heron, white pelicans and whooping crane among many others. There is fishing allowed all year round. It is also open in winter to Snowshoers and Cross Country Skiers.

Lake Zoar is a reservoir on the Housatonic River in the U.S. state of Connecticut. It is formed by Stevenson Dam. The towns of Monroe, Newtown, Oxford, and Southbury border Lake Zoar. 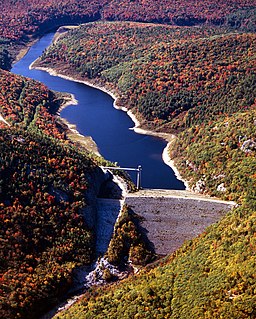 Ball Mountain Dam is a dam in Jamaica, Windham County, Vermont, in the southeastern part of the state.

Major League Fishing (MLF) is a professional bass fishing league and television show that airs on Outdoor Channel, World Fishing Network and Discovery Channel. The league was established in partnership between the Professional Bass Tour Anglers' Association (PBTAA) and Outdoor Channel as an answer to other professional fishing tournaments that the anglers compete in. The show focuses on personalities and struggles of anglers in competition rather than purely on results.