In 1917, 800 acres on Cheyenne Mountain was homesteaded by Bert Swisher and Thomas Dixon, both of whom applied for the homestead that year. The actual grants for the property, now part of the Cheyenne State Park, were granted to Bert Swisher and Thomas Dixon between 1922 and 1926. Dixon resided with his family in a cabin near the top of the mountain in the middle of three valleys. Swisher's cabin was near the present site of the antenna farm at the top of the mountain, which was accessed by Old Stage Road. The Dixon property was purchased by Swisher's grandchildren in 1988 through the Cheyenne Mountain Reserve, LLC. [1] :2

Formerly the JL Ranch, the park is situated just south of Colorado Springs and represents the protection of one of the last significant open spaces along the southern section of the Colorado Front Range. The 2,701-acre (10.93 km2) park lies beneath the eastern flank of Cheyenne Mountain, and borders the plains of Colorado in a stunning transition from plains to peaks. The land is in remarkable natural condition, and wildlife is abundant as well as diverse due to the property's relatively undisturbed and unfragmented nature. Wildlife in the park includes deer, elk, black bears, cougar, coyotes, foxes, prairie dogs, red-tailed hawks, golden eagles and wild turkeys.

The park opened in October 2006 and is the only state park located in El Paso County. There are 20 miles (32 km) of trails throughout the park which are open to hikers and bikers. Dogs and horses are not permitted on the trails in order to keep the surrounding ecosystems intact and to avoid disturbing the ground-nesting birds that reside in the park.

Cheyenne Mountain also has day-use picnic sites and a visitor center where educational displays and interpretive programs are available for visitors. Evening programs and nature hikes are available during the spring and summer months and periodically during the fall and winter months. The park is open for day use, camping with full hookup and walk-in camping sites, and a camper services building. 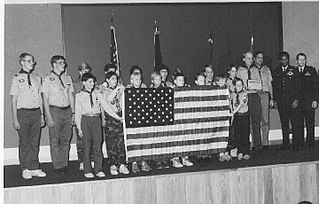 Palmer Lake is a Statutory Town in El Paso County, Colorado, United States. The population was 2,420 at the 2010 census. Palmer Lake was founded by General William Jackson Palmer in 1871 and was incorporated in 1889. 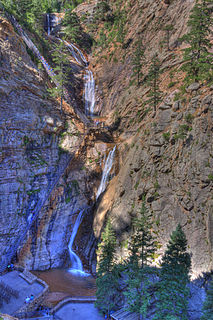 The Broadmoor Seven Falls is a series of seven cascading waterfalls of South Cheyenne Creek in South Cheyenne Cañon, Colorado Springs, Colorado. It has been a privately-owned tourist attraction since it was opened in the early 1880s. 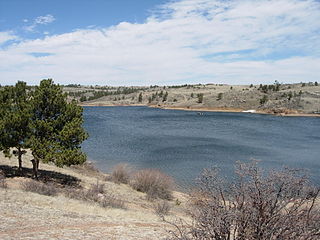 Curt Gowdy State Park is a public recreation area covering 3,395 acres in Albany and Laramie counties in Wyoming, United States. It is located on Wyoming Highway 210, halfway between Cheyenne and Laramie, about 24 miles (40 km) from each. The state park is known for its extensive trail system, fishing reservoirs, and Hynds Lodge, which is listed on the National Register of Historic Places. The park is managed by the Wyoming Division of State Parks and Historic Sites.

Fountain Creek is a stream that originates in Woodland Park in Teller County and flows through El Paso County to its confluence with the Arkansas River near Pueblo in Pueblo County, Colorado. The 74.5-mile-long (119.9 km) creek, once known as the Fontaine qui Bouille, is a tributary of the Arkansas River.

Mohican State Park is a 1,110-acre (450 ha) public recreation area located on the south shore of Pleasant Hill Lake, five miles (8.0 km) south of Loudonville in Ashland County, Ohio, United States. The state park is located along Ohio SR 3 and Ohio SR 97 and is surrounded by the 4,525-acre (1,831 ha) Mohican-Memorial State Forest. The Clear Fork of the Mohican River flows through the park carving a narrow gorge and joins the Black Fork about a half-mile east of the park to form the Mohican River. The park is open for year-round recreation including camping, hiking, boating, mountain biking, fishing, and picnicking.

Bear Creek Regional Park and Nature Center is a regional park located in Colorado Springs, Colorado that has trails for hiking, horseback riding, running and cycling. Within the park is a nature center and the El Paso Park Headquarters. 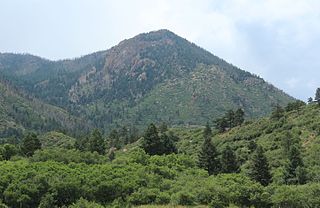 St. Peter's Dome is a granite-topped peak on Pikes Peak massif in the Pike National Forest. The peak, at 9,528 feet (2,904 m) in elevation, is located in El Paso County, Colorado, above Colorado Springs. It is located about 8 miles (13 km) from Colorado Springs along Old Stage and Gold Camp Roads. Old Stage Road is picked up behind The Broadmoor and Gold Camp Road winds through Cheyenne Canyon.

Bottchers Gap is a day use area, campground, and trail head. It is located 7.6 miles (12.2 km) from the Big Sur Coast Highway at the end of Palo Colorado Road on the northern border of the Los Padres National Forest and Ventana Wilderness. From Bottchers Gap, there is an 3.3 miles (5.3 km) long private access road that leads to Camp Pico Blanco. Beginning at Bottchers Gap, it is a difficult 14.7 miles (23.7 km) hike via the Skinner Ridge and Ventana Double Cone trails to the Ventana Double Cone, making it one of the more distant locations in the wilderness.