Cool Ruler is a 1978 studio album by Gregory Isaacs, his first released on the Virgin Records subsidiary Front Line. The Jamaican release was on Isaacs' African Museum imprint. The album was produced by Isaacs and mixed by Lancelot "Maxie" McKenzie at Channel One Studios in Kingston, Jamaica. Of the tracks on the album, "Let's Dance" had previously been released as a single. [2] Some of the tracks on the album are considered among the best ever recorded by Isaacs, although the album failed to give him the international breakthrough that had been anticipated. [2] [3] The album title did, however, endure as Isaacs' nickname. [4] "John Public" was also released as a single. [2] The album formed the basis of the dub album Slum in Dub, released the same year. Cool Ruler was reissued on compact disc by Virgin in 2000.

Gregory Anthony Isaacs OD was a Jamaican reggae musician. Milo Miles, writing in The New York Times, described Isaacs as "the most exquisite vocalist in reggae".'.

All tracks by Gregory Isaacs except where noted

The Heptones are a Jamaican rocksteady and reggae vocal trio most active in the 1960s and early 1970s. They were one of the more significant trios of that era, and played a major role in the gradual transition between ska and rocksteady into reggae with their three-part harmonies. The Heptones were contemporaries of the Wailers and the Maytals, and every bit their equal in the mid-60's.

The Revolutionaries is a Jamaican reggae band.

Lowell "Sly" Fillmore Dunbar is a drummer, best known as one half of the prolific Jamaican rhythm section and reggae production duo Sly and Robbie. 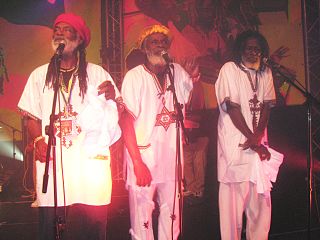 The Congos are a reggae vocal group from Jamaica which formed as the duo "Ashanti" Roy Johnson (tenor) and Cedric Myton (falsetto), later becoming a trio with the addition of Watty Burnett (baritone), and have been active on and off from the mid-1970s until the present day. They are best known for their Heart of the Congos album, recorded with Lee "Scratch" Perry. 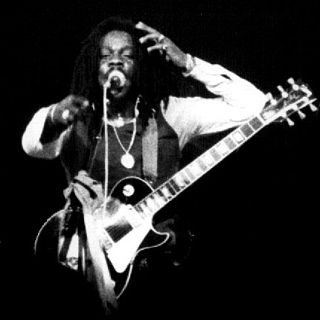 Heart of the Congos is a roots reggae album by The Congos, produced by Lee "Scratch" Perry at his Black Ark studio with a studio band including Boris Gardiner on bass and Ernest Ranglin on guitar. The album was released in 1977. It is noted as being one of Perry's masterpiece productions of the Black Ark era.

Mighty Diamonds are a Jamaican harmony trio, recording roots reggae with a strong Rastafarian influence. The group was formed in 1969 and remains together as of 2012. They are best known for their 1976 debut album Right Time produced by Joseph Hoo Kim and the 1979 release Deeper Roots.

Harry A. Mudie is a Jamaican record producer.

Leroy "Horsemouth" Wallace is a Jamaican drummer who worked for several years at Studio One, and has worked with numerous reggae artists including The Gladiators, Inner Circle, Prince Far I, Sound Dimension, Gregory Isaacs, Burning Spear, Ijahman Levi, Bruno Blum and Pierpoljak. He starred as himself in the lead role of the film Rockers. Wallace attended the Alpha Boys School in the 1960s and early 1970s, where he studied under Lennie Hibbert. Wallace also joined The Skatalites when they reformed in the mid-1970s. Wallace has been credited with inventing the 'Rockers' rhythm.

Mafia & Fluxy are a British reggae rhythm section and production team consisting of brothers Leroy (bass) and David Heywood (drums), whose careers began with London reggae band The Instigators in 1977. They backed Jamaican artists on UK tours, and in 1987 visited Jamaica, building rhythm tracks for producers such as Bunny Lee, King Jammy, Donovan Germain, and Philip "Fatis" Burrell, becoming one of the most in-demand rhythm sections of the ragga age. They started their own label, producing artists such as Sugar Minott, King Kong, Gregory Isaacs, Johnny Osbourne, Cornell Campbell and General Levy.

The Itals are a Jamaican reggae vocal group formed in 1976 by Alvin "Keith" Porter, Lloyd Ricketts, and Ronnie Davis, all of whom had previously also recorded as solo artists. All three had worked together in the late 1960s in The Westmorelites. The group recorded several albums through the late 1970s and 1980s, with Ronnie Davis going on to a successful solo career in 1997 as Ronnie Davis and Idren. The Itals' debut single, "In A Dis Ya Time", is regarded as the group's finest work, and topped the Jamaican chart. 1987's Rasta Philosophy was nominated for a Grammy Award as Best Reggae Album. The line-up has changed over the years, with former solo artist David Isaacs joining in 1987 when Ricketts was sentenced to a prison term, preventing him from travelling to the United States. Davis left the group in 1994, and was replaced by Porter's daughter Kada. The Itals continued to tour in 2009 in support of the newly released "Let Them Talk". In 2011 original member Lloyd Ricketts was able to obtain a work permit and performed two shows with Keith and Ronnie before his death. Ronnie Davis stepped away from The Itals again in 2012 and reunited with the Rocksteady group The Tennors, but Keith continues to tour with two of his children, Darien Porter and Kada Porter, providing harmonies. Keith will be releasing "Mind Over Matter", the remastered compilation of 22 early Itals songs and a solo album of reggae covers of classic R&B songs, called "Let's Get it On" in July 2015.

Ronnie Davis was a Jamaican reggae singer who was a member of The Tennors, The Itals, and the group Ronnie Davis & Idren. He lately performed as a solo artist.

Larry Marshall, was a Jamaican reggae singer, who recorded both as a solo artist and as part of the duos Larry & Alvin and Larry & Enid.

Ernest Wilson is a reggae singer who found fame as a member of The Clarendonians before working as a solo artist.

The Blackstones are a United Kingdom-based reggae vocal trio formed in 1974, in the tradition of the Jamaican harmony-trio.

Enos McLeod is a Jamaican reggae singer and record producer whose career dates to the mid-1960s.

Private Beach Party is a 1985 studio album by the Jamaican reggae singer Gregory Isaacs. The album continued Isaacs' working relationship with producer Augustus "Gussie" Clarke, to whom he would return in 1988 for the hugely successful "Rumours" and Red Rose for Gregory. Clarke employed Carlton Hines to write several of the songs on the album, and the musicians featured include Sly Dunbar, Robbie Shakespeare, Lloyd Parks, and Willie Lindo.

Roy Anthony Cousins is a Jamaican reggae singer, producer, and record label owner, known for being lead singer and co creator of The Royals, his productions of artists such as Charlie Chaplin, Prince Far I, and Cornell Campbell, and his record labels,Tamoki-Wambesi/Tamoki Wambesi Dove.