Counterconditioning (also called stimulus substitution) is functional analytic principle that is part of behavior analysis, and involves the conditioning of an unwanted behavior or response to a stimulus into a wanted behavior or response by the association of positive actions with the stimulus. [1] For example, when training a dog, a person would create a positive response by petting or calming the dog when the dog reacts anxiously or nervously to a stimulus. Therefore, this will associate the positive response with the stimulus. [2]

Mary Cover Jones was the first to show the effectiveness of the counter conditioning process in her rabbit experiments. She was able to eliminate the fear of rabbits from a young boy. The rabbit was first kept away from the boy and then moved closer and closer, while the boy was able to eat his favorite foods. The boy was allowed to touch the rabbit and then was able to eat his food to reduce the nervousness touching the rabbit induced. Eventually the boy was able to pet the rabbit without any sign of fear because of the unpleasant and feared stimulus of the rabbit was now replaced by the pleasant stimulus of the food. But Jones was not the only one working on this process of conditioning, J.B. Watson and R. Rayner suggested a process similar to that of Jones and also shortly after the rabbit experiments were published Ivan Pavlov used a similar procedure for a dog that was agitated by his experiments. [3]

It is a common treatment for aggression, fears, and phobias. The use of counter conditioning is widely used for treatment in humans as well as animals. The most common goal is to decrease or increase the want or desire to the stimulus. One of the most widely used types of counter conditioning is systematic desensitization. This technique uses muscle relaxation instead of food as the positive counter stimulus. The main goal in this treatment is to reduce fear to a certain feared stimulus. [3]

Classical conditioning refers to a learning procedure in which a biologically potent stimulus is paired with a previously neutral stimulus. It also refers to the learning process that results from this pairing, through which the neutral stimulus comes to elicit a response that is usually similar to the one elicited by the potent stimulus. It was first studied by Ivan Pavlov in 1897. 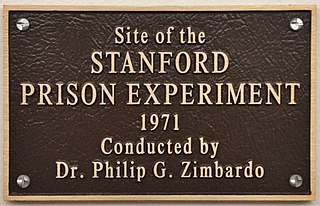 The Stanford prison experiment (SPE) was a social psychology experiment that attempted to investigate the psychological effects of perceived power, focusing on the struggle between prisoners and prison officers. It was conducted at Stanford University on the days of August 14–20, 1971, by a research group led by psychology professor Philip Zimbardo using college students. In the study, volunteers were assigned to be either "guards" or "prisoners" by the flip of a coin, in a mock prison, with Zimbardo himself serving as the superintendent. Several "prisoners" left mid-experiment, and the whole experiment was abandoned after six days. Early reports on experimental results claimed that students quickly embraced their assigned roles, with some guards enforcing authoritarian measures and ultimately subjecting some prisoners to psychological torture, while many prisoners passively accepted psychological abuse and, by the officers' request, actively harassed other prisoners who tried to stop it. The experiment has been described in many introductory social psychology textbooks, although some have chosen to exclude it because its methodology is sometimes questioned.

The Little Albert experiment was a controlled experiment showing empirical evidence of classical conditioning in humans. The study also provides an example of stimulus generalization. It was carried out by John B. Watson and his graduate student, Rosalie Rayner, at Johns Hopkins University. The results were first published in the February 1920 issue of the Journal of Experimental Psychology.

Dog training is the application of behavior analysis which uses the environmental events of antecedents and consequences to modify the dog behavior, either for it to assist in specific activities or undertake particular tasks, or for it to participate effectively in contemporary domestic life. While training dogs for specific roles dates back to Roman times at least, the training of dogs to be compatible household pets developed with suburbanization in the 1950s.

Deindividuation is a concept in social psychology that is generally thought of as the loss of self-awareness in groups, although this is a matter of contention (resistance). Sociologists also study the phenomenon of deindividuation, but the level of analysis is somewhat different. For the social psychologist, the level of analysis is the individual in the context of a social situation. As such, social psychologists emphasize the role of internal psychological processes. Other social sciences, such as sociology, are more concerned with broad social, economic, political, and historical factors that influence events in a given society.

Systematic desensitization, also known as graduated exposure therapy, is a type of behavior therapy developed by South African psychiatrist, Joseph Wolpe. It is used in the field of clinical psychology to help many people effectively overcome phobias and other anxiety disorders that are based on classical conditioning, and shares the same elements of both cognitive-behavioral therapy and applied behavior analysis. When used by the behavior analysts, it is based on radical behaviorism, as it incorporates counterconditioning principles, such as meditation and breathing. From the cognitive psychology perspective, however, cognitions and feelings trigger motor actions.

In psychology, desensitization is a treatment or process that diminishes emotional responsiveness to a negative, aversive or positive stimulus after repeated exposure to it. Desensitization also occurs when an emotional response is repeatedly evoked in situations in which the action tendency that is associated with the emotion proves irrelevant or unnecessary. The process of desensitization was developed by psychologist Mary Cover Jones, and is primarily used to assist individuals in unlearning phobias and anxieties. Joseph Wolpe (1958) developed a method of a hierarchal list of anxiety evoking stimuli in order of intensity, which allows individuals to undergo adaption. Although medication is available for individuals suffering from anxiety, fear or phobias, empirical evidence supports desensitization with high rates of cure, particularly in clients suffering from depression or schizophrenia.

Errorless learning was an instructional design introduced by psychologist Charles Ferster in the 1950s as part of his studies on what would make the most effective learning environment. B. F. Skinner was also influential in developing the technique, noting that,

In psychology, a stimulus is any object or event that elicits a sensory or behavioral response in an organism.

The term conditioned emotional response (CER) can refer to a specific learned behavior or a procedure commonly used in classical or Pavlovian conditioning research. It may also be called "conditioned suppression" or "conditioned fear response (CFR)." It is an "emotional response" that results from classical conditioning, usually from the association of a relatively neutral stimulus with a painful or fear-inducing unconditional stimulus. As a result, the formerly neutral stimulus elicits fear. For example, if seeing a dog is paired with the pain of being bitten by the dog, seeing a dog may become a conditioned stimulus that elicits fear.

Generalization is the concept that humans and other animals use past learning in present situations of learning if the conditions in the situations are regarded as similar. The learner uses generalized patterns, principles, and other similarities between past experiences and novel experiences to more efficiently navigate the world. For example, if a person has learned in the past that every time they eat an apple, their throat becomes itchy and swollen, they might assume they are allergic to all fruit. When this person is offered a banana to eat, they reject it upon assuming they are also allergic to it through generalizing that all fruits cause the same reaction. Although this generalization about being allergic to all fruit based on experiences with one fruit could be correct in some cases, it may not be correct in all. Both positive and negative effects have been shown in education through learned generalization and its contrasting notion of discrimination learning.