The Croix de guerre (French) or Oorlogskruis (Dutch), both literally translating as "Cross of War", is a military decoration of the Kingdom of Belgium established by royal decree on 25 October 1915. [1] It was primarily awarded for bravery or other military virtue on the battlefield. The award was reestablished on 20 July 1940 by the Belgian government in exile for recognition of bravery and military virtue during World War II. [2] The post-1940 decoration could also be awarded to units that were cited. The decoration was again reestablished by royal decree on 3 April 1954 for award during future conflicts. [3]

The World War I Croix de guerre was established by royal decree on 25 October 1915 as an award for bravery or other military virtue on the battlefield. It was only awarded to individuals. The Croix de guerre was not only awarded for bravery but also for three years or more of service on the front line, or for good conduct on the battlefield. It was also awarded to volunteers older than 40 or younger than 16 after a minimum of 18 months of service, to escaped prisoners of war rejoining the armed forces, and to military personnel who were placed on inactive duty because of injury. [1]

The World War I Croix de guerre was a 40mm wide bronze Maltese cross with 3mm in diameter balls at its eight points. It had a 14mm in diameter central medallion bearing the relief image of a "lion rampant" on its obverse and the royal cypher of King Albert I on its reverse. Two 37mm long crossed swords point upwards between it arms. A 14mm high "inverted V" between the two points of the top cross arm is secured to the inside of a 25mm wide by 25mm high royal crown, the ribbon's suspension ring passes through the top orb of the crown giving the cross a total height of 65mm. [1]

When the person being awarded the Croix de guerre was mentioned in despatches, this distinction was denoted by a device worn on the ribbon, either a small lion or a palm adorned with the monogram "A" (for Albert I): [1]

When awarded posthumously, the ribbon of the Croix de guerre was adorned with a narrow black enamel bar. [1]

The World War II Croix de guerre was established on 20 July 1940 by the Belgian government in exile, it differed from the World War I version in its statute and slight changes to the reverse of the central medallion and the ribbon. [2]

It was still mainly awarded to individuals, but was now also authorized as a unit award. A war cross being presented to a unit was denoted by a ribbon of the war cross being affixed to the unit colours [2]

The World War II Croix de guerre was constructed in the same dimensions as its World War I predecessor, the only real difference being the royal cypher of King Leopold III on its reverse. The new ribbon was still red with light green stripes but there were now six, 1mm wide, and positioned three on each side 2mm apart beginning 2mm from the edge of the ribbon. [2]

The same ribbon devices were used as in World War I except the palms were now adorned with the monogram "L" (for Leopold III). [2]

On 3 April 1954, the Belgian government re-established the Croix de guerre but this time without any reference to a specific conflict. This decoration is intended to be awarded in a manner akin the World War II statute during potential future wars. The 1954 Croix de guerre has not yet been awarded. [3]

The post-1954 (or current) Croix de guerre is similar to the previous variants but with a different reverse center medallion now bearing the Coat of arms of Belgium in lieu of a royal monogram. [3]

The ribbon is a colour reversal of the World War II Croix de guerre ribbon, green with three narrow 1mm wide red stripes 2mm apart on each side beginning 2mm from the edge. [3] 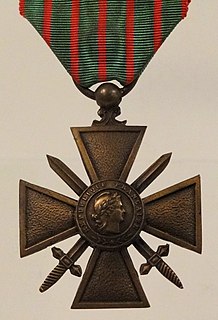 The Croix de Guerre is a military decoration of France. It was first created in 1915 and consists of a square-cross medal on two crossed swords, hanging from a ribbon with various degree pins. The decoration was first awarded during World War I, again in World War II, and in other conflicts; the croix de guerre des théâtres d'opérations extérieures was established in 1921 for these. The Croix de Guerre was also commonly bestowed on foreign military forces allied to France. 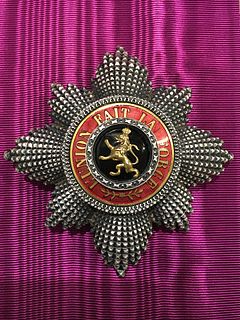 The Order of Leopold is one of the three current Belgian national honorary orders of knighthood. It is the oldest and highest order of Belgium and is named in honour of its founder, King Leopold I. It consists of a military, a maritime and a civil division. The maritime division is only awarded to personnel of the merchant navy, and the military division to military personnel. The decoration was established on 11 July 1832 and is awarded by Royal order. 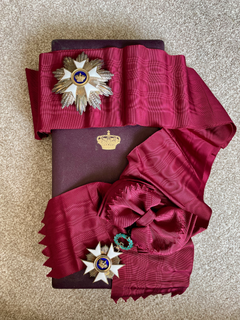 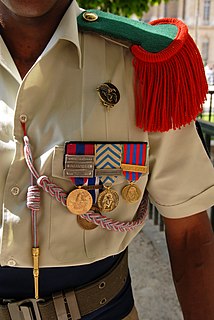 The fourragère is a military award, distinguishing military units as a whole, in the form of a braided cord. The award was first adopted by France, followed by other nations such as the Netherlands, Belgium, Portugal, and Luxembourg. Fourragères have been awarded to units of both national and foreign militaries, except for that of Luxembourg, which has not been awarded to any foreign units.

The Croix de guerre 1914–1918 is a French military decoration, the first version of the Croix de Guerre. It was created to recognize French and allied soldiers who were cited for valorous service during World War I, similar to the British mentioned in dispatches but with multiple degrees equivalent to other nations' decorations for courage.

The Military Cross is a military long service decoration of Belgium. It was established by Royal Decree on 11 February 1885 and is awarded to commissioned officers in the Belgian Armed Forces for loyal and uninterrupted service or to Non-Belgian military officers for distinguished service in favor of the Military of Belgium.

The Civic Decoration is a civilian decoration of the Kingdom of Belgium. It was first established by royal decree on 21 July 1867 to reward exceptional acts of bravery, devotion or humanity. A further royal decree of 15 January 1885 extended the award to state civil servants for long service by a mere change of ribbon. The award statute was once again amended by royal decree in 1902 to include long service in the Civic Guard and firefighters, each with its distinctive ribbon. 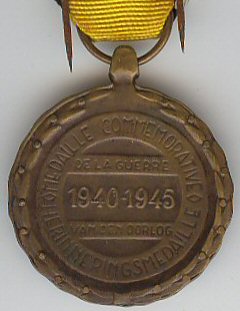 The Commemorative Medal of the 1940–45 War was a military decoration of Belgium. It was established by royal decree of the Prince Regent on 16 February 1945 to recognise Belgian servicemen and women who served during World War II. It was also awarded to members of the Belgian Resistance and members of Belgium's Merchant Navy on the side of the Allies. Later decrees allowed for its award to foreign recipients of the Belgian Croix de Guerre.

The Yser Medal was a Belgian campaign medal of World War I, established on 18 October 1918 to denote distinguished service during the 1914 Battle of the Yser in which the Belgian Army stopped the German advance of the German invasion of Belgium. 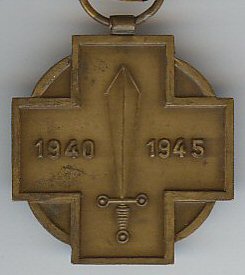 The 1940–1945 Military Combatant's Medal was a Belgian war medal established by royal decree on 19 December 1967 and awarded to all members of the Belgian Armed Forces who fought from the United Kingdom during the Second World War. 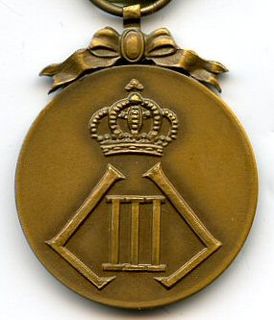 The Maritime Medal 1940–1945 was a Belgian bravery award of World War II, established by Royal Decree on 17 July 1941 and awarded to members of the Belgian Navy, merchant navy or fishing fleet for acts of heroism in the saving of ships or lives during an action against the enemy.

The Deportees' Cross 1914–1918 was a Belgian war medal established on 27 November 1922 by royal decree and awarded to Belgian citizens deported to Germany for forced labour during the First World War.

The Political Prisoner's Cross 1940–1945 was a Belgian war medal established by royal decree of the Regent on 13 November 1947 and awarded to Belgian citizens arrested and interned by the Germans as political prisoners during the Second World War. The award's statute included provisions for posthumous award should the intended recipient not survive detention, and the right of the widow, the mother or the father of the deceased to wear the cross. 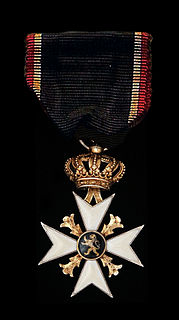 In 1833, following the end of the Belgian Revolution, the young kingdom of Belgium created the Iron Cross to recognise wounds received and bravery in battle. The award first class was bestowed to the wounded who elected to stay at their post and keep fighting, to the maimed and mutilated, as well as for acts of courage, the award second class was bestowed to all wounded combatants. In 1835, due to the discontent of most recipients, the award 2nd class was terminated and all received the first class. Over the years, recipients of the Iron Cross received ever increasing pensions, up to ten years of seniority when employed as civil servants and pensions for the widows and orphans of the deceased. The other combatants of 1830-1831 received no pension, and no commemorative medal was struck. 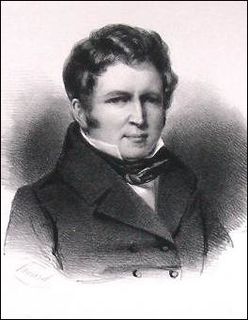 The Iron Cross was established by law in 1833 following the end of the Belgian Revolution to recognise serious wounds received and bravery in battle by Belgian citizens taking part in the fight for Belgian independence from the United Kingdom of the Netherlands between 25 August 1830 and 4 February 1831. A further royal decree of 22 August 1834 created a second class to the Iron Cross for award to all wounded combatants. Due to the lower perceived importance of the second class award and discontent among recipients, the Iron Cross second class was short-lived and amalgamated to the Iron Cross first class by decree of 21 February 1835. All recipients now received the (original) first class award.

The Escapees' Cross 1940–1945 was a Belgian war service medal established on 25 February 1944 by the Belgian government in exile in London. It was awarded to all Belgian citizens who, during World War II, escaped from occupied Belgium, from another occupied land or from Germany and that, following said escape, had proven their patriotism by joining and serving with a resistance group, or had been imprisoned for a minimum of three months following an act of patriotism, or for having travelled clandestinely to participate in a Belgian action aimed at promoting the war against the enemy. Escaped prisoners of war could also be awarded the medal if they met this last criteria.