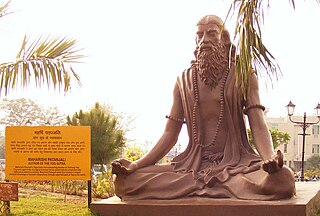 Yoga is a group of physical, mental, and spiritual practices or disciplines which originated in ancient India. Yoga is one of the six orthodox schools of Hindu philosophical traditions. There is a broad variety of yoga schools, practices, and goals in Hinduism, Buddhism, and Jainism. The term "yoga" in the Western world often denotes a modern form of Hatha yoga, yoga as exercise, consisting largely of the postures called asanas.

Trained as a primary school teacher, David Farmer worked first as an actor and teacher before setting up Tiebreak Theatre Company in 1981. Under his leadership, the company produced 65 productions for children and young people which toured across the UK and abroad. He left in 2005 to pursue a freelance career as writer and director. He also trains teachers in the use of educational drama and runs a drama resource website.

"This year’s outstanding show at the festival." - The Herald (on Singing in the Rainforest)

"At last, the show we’ve all been waiting for. Bursting at the seams with theatrical energy and full to the brim with visual wit, My Uncle Arly is also a sensational piece of ensemble playing... Sensationally silly and utterly brilliant." - Sunday Herald (on My Uncle Arly)

"A clever collaboration between physical-theatre company Hoipolloi and the children's company Tiebreak, this is one of those shows that entirely defies categorisation. It is equally suitable for adults and children, and all it requires is an audience that is prepared to embrace the absurd." - The Guardian (on My Uncle Arly) [2]

"A beautifully imagined account of this children's favourite, performed with gusto and real storytelling suspense." - The Sunday Times (on Jack and the Beanstalk)

"It can be quite happily summed up as intelligent, humorous, inventive theatre for young people" - The Stage (on Jack and the Beanstalk)

So You Think You Know Boal in Teaching Drama magazine (2006)

Learning Through Drama in the Primary Years (Drama Resource 2011)

Ben Nicholas is an Australian actor. He is best known for playing Scott "Stingray" Timmins in the Australian soap opera Neighbours.

Jack Shepherd is an English actor, playwright, theatre director, saxophone player and jazz pianist. He is known for his television roles, most notably the title role in Trevor Griffiths' series about a young Labour MP Bill Brand (1976), and the detective drama Wycliffe (1993–98). His film appearances include All Neat in Black Stockings (1969), Wonderland (1999) and The Golden Compass (2007). He won the 1983 Olivier Award for Best Actor in a New Play for the original production of Glengarry Glen Ross.

Ieuan Rhys is a Welsh actor. His television work has included thirteen years in the BBC Cymru soap opera Pobol y Cwm, Seargent Tom Swann in the last series of A Mind to Kill and six series of the Welsh-language version of Mr & Mrs – Sion a Sian for HTV. For the past four series he has portrayed Eurig Bell, the "not to be messed with" Deputy Headmaster in S4C's Gwaith/Cartref.

Fascinating Aïda is a British comedy singing group and satirical cabaret act founded in March 1983. The line-up consists of founder member Dillie Keane; Adèle Anderson, who joined in 1984, and Liza Pulman, who first joined in 2004. The group received a Perrier Award nomination at the 1984 Edinburgh Festival, and went on to be nominated three times for the Olivier Award for Best Entertainment, and twice for the Drama Desk Award for Outstanding Revue. Keane and Anderson were also nominated for the 2010 Drama Desk Award for Outstanding Lyrics. Their name is derived from the expletive exclamation 'F**king Ada!', which appears in the text of Alan Bennett’s play The History Boys (2004), and is also the name of a song by Ian Dury. 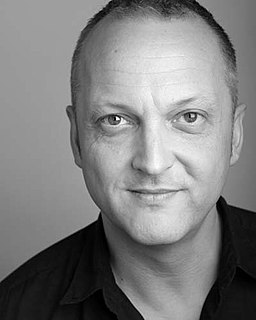 David Benson is an English theatre actor, writer and comedian.

Tiebreak Theatre was founded in 1981, in Norwich, England. It functioned as a Theatre in Education (TIE) and young people's theatre company until April 2006, when it closed following a funding decision by Arts Council England.

Ché Walker is an English actor, playwright, theatre director and teacher at the Identity Drama School. Walker lives in Camden in London His musical Been So Long played at the Edinburgh Fringe Festival, and the Young Vic. His mother is the actress Ann Mitchell.

Hoipolloi are a British touring theatre company committed to creating new work for theatre that imaginatively engages their audience and makes them laugh. Their work includes ensemble shows such as The Doubtful Guest and My Uncle Arly, and collaborations with fictional Welsh artist "Hugh Hughes", including the shows Floating and Story of a Rabbit.

Story of a Rabbit is a stage production created and performed by Hugh Hughes, in collaboration with British touring theatre company Hoipolloi. 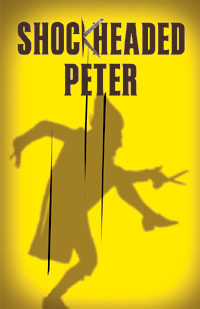 Shockheaded Peter is a 1998 musical using the popular German children's book Struwwelpeter (1845) by Heinrich Hoffmann as its basis.

Rolan Bell is a British actor who was born in Chiswick, west London, of Jamaican heritage. He became known for appearing in the BBC One television soap opera EastEnders as Theo Kelly in 2009.