The Dayton City League is an OHSAA-sponsored athletic league that is entirely made up of schools located within Dayton, Ohio that are part of Dayton Public Schools.

The league did not exist from 2002-2007 when the schools remaining after several closures and consolidations joined the Southwest Ohio Public League. [1] Beginning in 2015 and for football only, all five football-playing schools will rejoin the SOPL.

The Great Midwest Conference was an NCAA Division I athletics conference that existed from 1991 to 1995.

This is a list of high school athletic conferences in Ohio, separated by Ohio High School Athletic Association (OHSAA) region. Some conferences have schools in multiple regions, and will be listed in all applicable regions. However, the conference information is on the region page where the most schools are classified in. 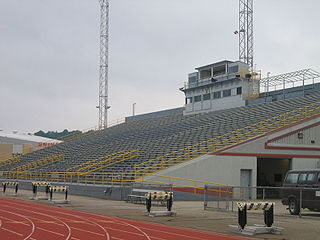 Welcome Stadium is an 11,000-seat multi-purpose stadium in Dayton, Ohio, United States, owned and operated by Dayton Public Schools. Primary tenants of the facility include University of Dayton Flyers football team and the Dayton Dynamo of the National Premier Soccer League.

Beavercreek High School is the public high school in Beavercreek, Ohio. A member of the Beavercreek City School District, the high school has an enrollment of more than 2300 students. The high school campus consists of Ferguson Hall, a free-standing building that houses the ninth grade, and the high school which accommodates the remaining grades 10–12. The principal is Dale Wren for the 2020-2021 school year and the school's mascot is the Battling Beaver.

Bellaire High School is a public high school located in Bellaire, Ohio, United States. It is the only high school in the Bellaire Local School District. Athletic teams compete as the Bellaire Big Reds in the Ohio High School Athletic Association as a member of the Buckeye 8 Athletic League as well as the Ohio Valley Athletic Conference.

Belmont High School is 1 of 6 high schools in the Dayton Public Schools school district. The school is located in Dayton, Ohio, and serves approximately 1000 students. The school mascot is the bison. Belmont High School did not meet any of the 13 indicators for the 2016–2017 school year on the State of Ohio Dept. of Education Report Card, and therefore received an 'F' grade. In addition, the school received a 38.9% score with a grade of 'F' on the Performance Index section of the Report Card as well. The school was established in 1959.

The Dayton Flyers football program is the intercollegiate American football team for the University of Dayton located in the U.S. state of Ohio. The team competes in the NCAA Division I Football Championship Subdivision (FCS) and are members of the Pioneer Football League. Dayton's first football team was fielded in 1905. The team plays its home games at the 11,000 seat Welcome Stadium in Dayton, Ohio. The Flyers are coached by Rick Chamberlin.

Spectrum Sports is a defunct regional sports network serving Ohio and parts of northern Kentucky, southern Michigan and western Pennsylvania operated by Charter Communications through its acquisition of Time Warner Cable in May 2016. Broadcasting on Channel 311 and 1311 exclusively on Time Warner Cable systems.

This is a list of high school athletic conferences in the Southwest Region of Ohio, as defined by the OHSAA. Because the names of localities and their corresponding high schools do not always match and because there is often a possibility of ambiguity with respect to either the name of a locality or the name of a high school, the following table gives both in every case, with the locality name first, in plain type, and the high school name second in boldface type. The school's team nickname is given last.

This is a list of former high school athletic conferences in the Southwest Region of Ohio, as designated by the OHSAA. If a conference had members that span multiple regions, the conference is placed in the article of the region most of its former members hail from. Because the names of localities and their corresponding high schools do not always match and because there is often a possibility of ambiguity with respect to either the name of a locality or the name of a high school, the following table gives both in every case, with the locality name first, in plain type, and the high school name second in boldface type. The school's team nickname is given last.

Roosevelt High School was a public high school in Dayton, Ohio, United States, that was part of the Dayton Public Schools. The school was named for U.S. President Theodore Roosevelt and opened in 1923. At the time of its construction, it was believed to have been the largest high school in the eastern U.S. Athletic teams competed in the Dayton City League and were known as the "Teddy Bears" or "Teddies" with school colors of red and white. The school closed in 1975 and the building was used for school district offices and other functions. It was demolished in 2008 to make way for the Dayton Boys Preparatory Academy, an elementary school for boys in grades kindergarten through eight, which opened in December 2010. Many architectural elements from the Roosevelt High School building were saved and incorporated into the new academy, and the area around the building is known as the Roosevelt Commons.