Disband (stylized as disBand) is a Canadian reality show that was produced and broadcast by MuchMusic that gave aspiring music acts a chance to get big industry attention. It was hosted by either Sarah Taylor or Devon Soltendieck and was usually narrated by the lead singer of the featured band.

Each episode featured a band that was coached by a music industry veteran and at the end performed for a panel of judges. Greig Nori "The Guru" had made appearances as an adviser, and Ralph James, Jennifer Hirst, Colin Lewis, JDiggz, Hannah Simone, Mark Spicoluk, Katie Clark, and Matt Wells had appeared as judges.

Each episode was in 7 different segments, for each day of the week leading up until Sunday, their performance day at MuchMusic Headquarters. The segments followed what the band experiences on each day, starting on Sunday. At the beginning of the episode, the band was introduced along with all of its members. The episode was usually narrated by the lead singer, although other members had done so as well.

In most cases, Greig would surprise them and arrange for them to meet up, where he would then begin coaching them. The bands would then take part in various activities such as photo shoots, meeting record labels, interviews, or writing new songs, throughout the week. Most episodes also featured the band visiting a local Toronto recording studio, such as Number 9 Audio Group [1] or The Decibel House, [2] for a recording session with a professional engineer. By the end of the week, they would have to perform amongst a panel of judges and an audience.

After their performance, they would head into a green room where Greig would be waiting for them. Back in the main room, the judges would deliberate and decide whether or not the band had a possibility of getting signed. However, the decision was not affected by the audience's wishes. The band would then go back into the main room, where the host would then summarize the judges' thoughts, mentioning both pros and cons of the band. After the verdict, the episode ended with the band either going back home, or got ready to take on a next step.

A spin-off series, entitled disBand Discovered began in 2011. The series premiered on August 16, 2011. The series follows six bands trying to make it in the industry, over the course of 6 months. MuchMusic has described the series as a "rock documentary". The show features six bands; Nightbox, Colorsound, For The Weekend, Brighter Brightest, Brett Boivin, Maddy Rodriguez and Slow Motion Victory. At the end of the season, the six bands go to Showcase Day at the MuchMusic Headquarters, where they are judged by several record producers serving as judges. The series is still hosted by Greig Nori.

After the series, For The Weekend released a single called Rockstar and fired one of their members. Slow Motion Victory released an EP "The War Inside", collaborated with Coca-Cola to write a song for their Open Happiness campaign, and are still making music. Nightbox was signed, and is currently on tour, and are going to be an opening act for Lights on tour. Brett Boivin graduated from high school and released an EP. Colorsound was also signed, and is currently working on their second album, while Brighter Brightest released their debut album, Right For Me.

Ivy was an American indie pop band composed of Andy Chase, Adam Schlesinger, and Dominique Durand. They were active between 1994 and 2012.

Spoons is a Canadian new wave band, formed in 1979 in Burlington, Ontario, Canada. They recorded several Canadian chart hits between 1982 and 1989, and in 1983, they were nominated for Most Promising Group of the Year at the Juno awards. Their most popular songs include "Romantic Traffic", "Nova Heart", "Old Emotions", and "Tell No Lies".

Caitlin's Way is a Canadian-American live action teen drama series that aired on Nickelodeon from 2000 to 2002. The show was co-created by Thomas W. Lynch.

Greig Andrew Nori is a producer and musician from Sault Ste. Marie, Ontario, and is well known as the frontman, co-lead vocalist and guitarist of the pop punk band Treble Charger. In the late 1990s, he began working as a producer with Sum 41 and was their in-house producer and manager until 2004. In 2007, Greig went back to the studio to produce for the pop punk bands Cauterize and Hedley, for their albums Disguises and Famous Last Words, respectively.

The fifth season of Canadian Idol is the fifth installation of the Idol series in Canada. It was again hosted by Ben Mulroney, with Farley Flex, Jake Gold, Sass Jordan and Zack Werner all returning as judges. The show premiered on June 5, 2007 with a 90-minute episode. Voting began during the fourth week. New events introduced that season included the Help Idols build a house and the Kraft Confidential with David Kerr. The elimination song for this year was Walk on Home by Kalan Porter. The final episode of the season was broadcast on September 11, 2007 when Brian Melo was crowned Canadian Idol.

Cross The T's and Gouge Your I's is Sum 41's second DVD. It was released in 2002, as the bonus DVD for the USA and UK editions of their hit album Does This Look Infected?, and as a separate DVD worldwide.
The DVD includes six sections: "Play Videos", "Reign of Pain", "Home Movies", "Pain for Pleasure Songs", "Lucifer Recommends" and "Weblink."

"For the Nights I Can't Remember" is a song recorded by Canadian pop rock band Hedley for their second studio album, Famous Last Words (2007). The ballad was co-written by the members of the band with the record's producers, Greig Nori and Dave Genn. It was released in November 2007 as the album's second single. In 2009, the song was re-issued digitally with their follow-up single.

Can You Duet was an American reality-competition show on CMT. The show was produced by FremantleMedia, the same company that produces American Idol. 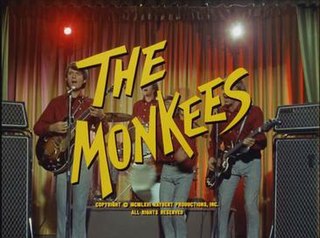 The Monkees is an American situation comedy series that first aired on NBC for two seasons, from September 12, 1966 to March 25, 1968. The series follows the adventures of four young men trying to make a name for themselves as a rock 'n roll band. The show introduced a number of innovative new-wave film techniques to series television and won two Emmy Awards in 1967, including Outstanding Comedy Series. The program ended in 1968 at the finish of its second season and has received a long afterlife through Saturday morning repeats and syndication, as well as overseas broadcasts.

Stereos are a Juno-nominated pop band from Edmonton, Alberta, Canada, formed in 2008. Their musical style fuses aspects of electronic music, rock, and pop. Their breakout came from appearing on the MuchMusic original series, disBAND. In October 2009, they released their debut self-titled album, Stereos. 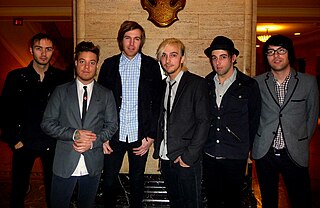 "Summer Girl" is the debut single by Canadian pop band Stereos, written by Patrick Kordyback from their self-titled debut album. It was the song they performed on MuchMusic's disBAND reality show, which led them to being signed by Universal Canada. It was released as a single in 2009. The song is about meeting a girl and wanting to have a one night stand, despite the fact that both parties have a significant other. 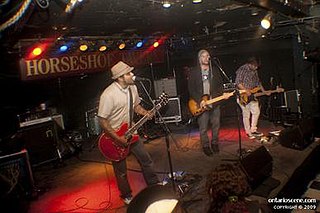 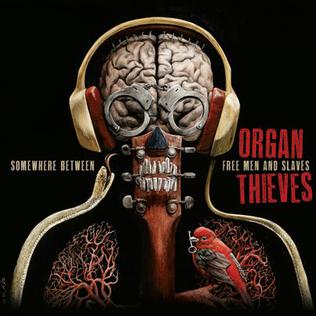 Somewhere Between Free Men and Slaves is the first full-length studio album by Canadian hard rock band Organ Thieves, released on April 24, 2012, through MapleMusic Recordings, through the Canada iTunes service, later followed by a physical CD release on May 8, 2012.

The second season of the Canadian television comedy series Video on Trial premiered on MuchMusic on August 27, 2006 and concluded on July 15, 2007. It consists of 30 episodes.

Number 9 Audio Group is a recording studio located in the Cabbagetown area of Toronto, Ontario, Canada at 222 Gerrard Street East. Number 9 produced the World Jazz For Haiti charity album in 2010, appeared on Much Music's DISBAND in 2008, and recorded Canadian acts Barenaked Ladies and Amanda Marshall in the 1990s, while they were still emerging artists.

Big Brother Canada 4 is the fourth season of the Canadian reality television series Big Brother Canada. It was produced by Endemol Shine North America and Insight Productions for all episodes, and Shaw Media for 16 episodes prior to defunct. The season premiered on March 2, 2016 on Global, and ended after 77 days – the longest season to date – on May 12, 2016, where for the first time in Big Brother Canada history a set of siblings won the series after Nick & Philippe Paquette beat Kelsey Faith in a 7–2 jury vote to be crowned the winners of Big Brother Canada 4.

Forever in Your Mind is an American pop boy band formed in 2013, consisting of Emery Kelly, Ricky Garcia and Liam Attridge. Their debut EP, FIYM, was released on Hollywood Records on July 1, 2016.