The Discography of American Historical Recordings (DAHR) is a database of master recordings made by American record companies during the 78rpm era. [1] The DAHR provides these original recordings, free of charge, via audio streaming, along with access to the production catalogs of those same companies. DAHR is part of the American Discography Project (ADP), and is funded and operated in partnership by the University of California, Santa Barbara, the National Endowment for the Humanities, [2] and the Packard Humanities Institute. [3]

The database catalog is essentially based on physically accessible archive material, stored at the companies that still exist and others that succeeded the production companies that were active at the time. Catalog compilations created by specialist authors are also used, supplemented by newly acquired research knowledge. [4]

The American Discography Project is partnered with the National Jukebox Project of the Library of Congress. As a result, Victor Talking Machine Company publications from 1900 to 1925, including additional recordings digitized by the University of California, Santa Barbara, are available. [6] 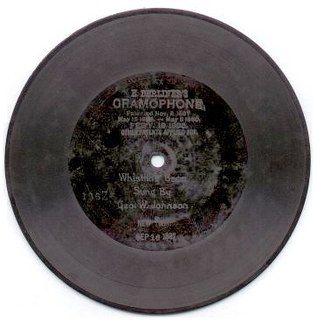 Berliner Gramophone – its discs identified with an etched-in "E. Berliner's Gramophone" as the logo – was the first disc record label in the world. Its records were played on Emile Berliner's invention, the Gramophone, which competed with the wax cylinder–playing phonographs that were more common in the 1890s.

Deutsche Grammophon (DGG) is a German classical music record label that was the precursor of the corporation PolyGram. Headquartered in Berlin Friedrichshain, it is now part of Universal Music Group (UMG) since its merger with the UMG family of labels in 1999. It is the oldest surviving established record company.

The Columbia Graphophone Company Limited was one of the earliest gramophone companies in the United Kingdom.

Zonophone was a record label founded in 1899 in Camden, New Jersey, by Frank Seaman. The Zonophone name was not that of the company but was applied to records and machines sold by Seaman from 1899–1903. The name was acquired by Columbia Records, Victor Talking Machine Company, and finally the Gramophone Company/EMI Records. It has been used for a number of record publishing labels by these companies. 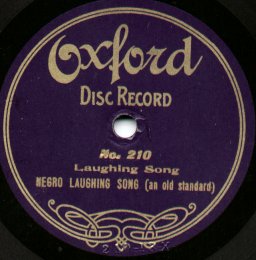 Oxford Records was a record label active in the United States of America from roughly 1906 until 1916. The label was produced for Sears by several labels, including Columbia and Albany Indestructible Cylinders for cylinders and Leeds & Catlin, Zon-O-Phone, and Columbia for discs. No recording activity was undertaken by Sears. All discs were single-sided.

Discography is the study and cataloging of published sound recordings, often by specified artists or within identified music genres. The exact information included varies depending on the type and scope of the discography, but a discography entry for a specific recording will often list such details as the names of the artists involved, the time and place of the recording, the title of the piece performed, release dates, chart positions, and sales figures. 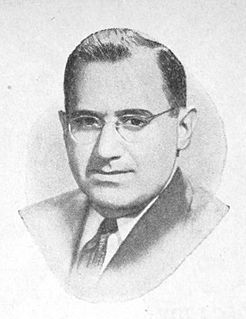 Benjamin Bernard Selvin was an American musician, bandleader, and record producer. He was known as the Dean of Recorded Music.

Edward Addison Favor, who was billed as Edward M. Favor or Ed. M. Favor, was an American vaudeville comedian, singer, musical theatre performer and pioneer recording artist, who was one of the most popular stars of the late nineteenth and early twentieth centuries.

Lydia Mendoza was an American guitarist and Spanish-language singer of Tejano, conjunto, and traditional Mexican-American music. Historian Michael Joseph Corcoran has stated that she was "The Mother of Tejano Music", an art form that is the uniquely Texas cultural amalgamation of traditional Mexican, Spanish, German and Czech musical roots. She recorded on numerous labels over the course of her six-decade career of live performing. The aggregate total of her records number an estimated 200 different Spanish-language songs on at least 50 LP record albums. In 1977, she performed at the Inauguration of President Jimmy Carter, as part of the line-up for the Inaugural Folk Dance and Concert. Her most well-known tune was "Mal Hombre", a song she had heard as a child.

Albert Charles Campbell was an American popular music singer who recorded between the late 1890s and the 1920s. He was best known for his many duo recordings with Henry Burr, and as a member of the Peerless Quartet and other vocal groups, but also recorded successfully as a solo singer both under his own name and under various pseudonyms including Frank Howard.

The All-Star Trio or All Star Trio was a musical ensemble consisting of George Hamilton Green on the xylophone along with Frank Banta or Victor Arden on the piano and F. Wheeler Wadsworth on the saxophone. It was among the most popular musical outfits of the very early Jazz Age. Their music was promoted as "dance music".

Frederick W. Hager was an American musician, recording artist, composer, and music director active between 1895 and 1923. 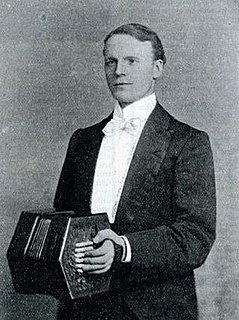 Alexander Prince was an early 20th-century vaudeville musician and recording artist who played the McCann-system Duet concertina. Born Alexander Sutherland in Aberdeen, Scotland, he was first given a concertina at age 8 by his music shop-owner father, who wanted to give him something to do after a broken leg rendered him immobile. Of this event, Prince said, "I am, or was, alas an infant prodigy. It was an accident, primarily. I was 8 years old, and I broke my leg. I had to lie in bed, and that was the start." He started to perform while still a youth, and by 1889 London's The Era newspaper mentioned him in a review of the club Alhambra Palace: "Alexander Prince plays the concertina with great effect, and is rewarded with much applause." After performing at the Glasgow Exhibition at age 20, Prince went on to perform internationally, including a 1904 tour in South Africa.

Simon Paskal was a Yiddish Theater actor and tenor who recorded numerous Yiddish-language discs during the early twentieth century.