Dogwood is the third full-length album by San Diego punk band Dogwood. It was self-recorded and self-released in 1998 and mainly sold by the band at shows or found at the local San Diego music stores Music Trader or Lou's records. The song Preschool days was rerecorded for this release at the suggestion of Warner Bros. records who were courting the band at the time. The tracks Never Die and Suffer were removed from the future rerelease This Is Not A New Album at the request of Tooth & Nail Records.

San Diego is a city in the U.S. state of California on the coast of the Pacific Ocean, approximately 120 miles (190 km) south of Los Angeles and immediately adjacent to the border with Mexico. With an estimated population of 1,425,976 as of July 1, 2018, San Diego is the eighth-largest city in the United States and second-largest in California. It is part of the San Diego–Tijuana conurbation, the second-largest transborder agglomeration between the U.S. and a bordering country after Detroit–Windsor, with a population of 4,922,723 people. The city is known for its mild year-round climate, natural deep-water harbor, extensive beaches, long association with the United States Navy, and recent emergence as a healthcare and biotechnology development center.

Buddha is a demo album by the American rock band Blink-182. Recorded and released in January 1994 under the name Blink, it was the band's first recording to be sold and distributed. Blink-182 was formed in Poway, California, a suburb outside of San Diego, in August 1992. Guitarist Tom DeLonge and Mark Hoppus were introduced to one another by Hoppus' sister. The duo recruited drummer Scott Raynor and began to practice together in his bedroom, spending hours together writing music, attending punk shows and movies and playing practical jokes. The band had recorded two previous demos in Raynor's bedroom — Flyswatter and Demo No.2 — using a four track recorder. Most of the tracks from the demo were re-recorded for the band's subsequent releases; seven were re-recorded for their debut album Cheshire Cat and one was re-recorded for their second album Dude Ranch. 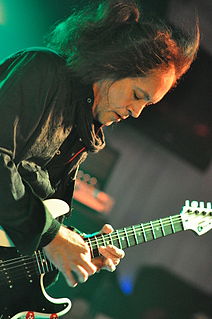 Jake E Lee is an American guitarist signed to Frontiers Records. He is best known for playing with Ozzy Osbourne between 1982-1987 and later in Badlands with Ray Gillen. He formed the band Red Dragon Cartel in 2013. Their eponymous first album was released in January 2014 and entered at No. 69 on Billboard's Album Charts. He has also recorded solo works under his own name, examples being the instrumental album A Fine Pink Mist (1996) and cover album Retraced (2005). 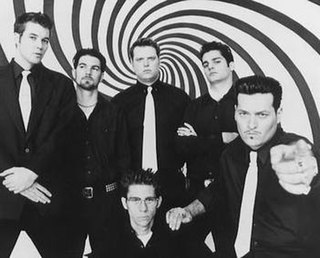 Adrian James "A.J." Croce is an American singer-songwriter. He is the son of Jim Croce and Ingrid Croce.

Reeve Oliver is an American pop rock band formed in 2000 in San Diego, California. They have released two albums and several EPs and have toured with larger acts such as The Vandals, Yellowcard, and Switchfoot. They have been locally recognized at the San Diego Music Awards, earning "best rock album" in 2003 for The Reeveolution EP and again in 2005 for Reeve Oliver, and being named "best rock act" at the 2006 awards.

Louis XIV is an American rock band from San Diego, California. The band has released four EPs between 2003 and 2007, and three albums between 2003 and 2008, the latter two of which were distributed by Atlantic Records. The band broke up in 2009, but in 2013, in an interview with The Reno Dispatch, Jason Hill confirmed that the band had decided to reunite.

Justin Pearson is a vocalist and bassist known for his prolific music career, playing in a number of San Diego-based noise rock, punk and grindcore bands, as well as his record label Three One G Records. Starting off in the punk outfit Struggle in 1994, ensuing projects such as Swing Kids, The Locust, Dead Cross and Retox. He has collaborated with Kool Keith, Gabe Serbian, Karen O, Nick Zinner, Adam Gnade, Invisibl Skratch Piklz, Asia Argento, The Bloody Beetroots, Silent, among many others.

"After Midnight" is a rock song by J. J. Cale, first released in 1966. Eric Clapton later covered it for his eponymous album, released in 1970. Clapton's rendition became a success, prompting Cale to re-record the song for Cale's 1972 album Naturally. In 1988, Clapton later re-recorded the song for a Michelob beer commercial and then released the re-recording as a single. "After Midnight" has been considered one of Clapton's signature songs throughout his career. Other artists covered the song in later years.

The Beautiful Mistake is a rock band from San Diego, California. Formed in 2000, the band released two full-length albums: the 2002 debut album, Light A Match, For I Deserve To Burn, and 2004's This Is Who You Are. They also released two EPs and had various songs featured on different compilation albums. 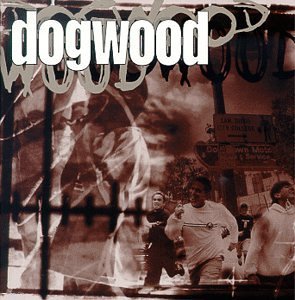 More Than Conquerors is the fourth full-length album by San Diego punk band Dogwood. It is their first to be released on Tooth & Nail Records. The title is a reference to the Bible passage Romans Chapter 8, verse 37; "Nay, in all these things we are more than conquerors through Him that loved us."

Building a Better Me is the fifth full-length album from San Diegan punk band Dogwood released in 2000. Instrumentation for the album was produced and recorded by Sam Boukas and Dogwood at Goldentrack studio in San Diego but vocals were produced and recorded at the Blasting Room studios in Fort Collins, Colorado by Descendents and ALL guitarist Stephen Egerton, whose vocals appear on the final track "Nothing New". In 2001 the band was awarded the San Diego Music Award for best Punk band for the album. 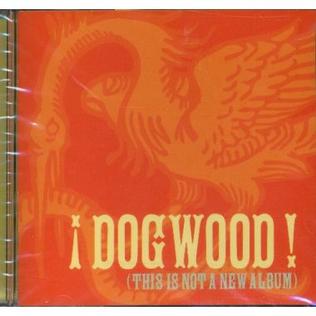 This Is Not a New Album is the 2001 re-issue of San Diegan punk band Dogwood's 1998 self-released eponymous album. The only difference is the omission of the original track 2, "Never Die," which was re-recorded in 1999's More Than Conquerors.

Matt Aragon is the sixth full-length album from San Diegan punk band Dogwood. The album's title is in honor of the band's long-time friend Matt Aragon, who had continued to support and encourage the band as a whole and the members as individuals during a stressful period around the album's production. The album was recorded in January 2001 at Motor Studios in San Francisco, and produced by Ryan Greene, most notable at the time for working with artists on the prominent punk record label Fat Wreck Chords such as NOFX, No Use for a Name, and Lagwagon. Guitarist Sean O'Donnell departed the band after the album's release. The album went on to win a 2002 San Diego Music Award for Best Punk album.

Daniel Milton Peek was an American musician best known as a member of the folk rock band America from 1970 to 1977, together with Gerry Beckley and Dewey Bunnell. He has been called a "pioneer in contemporary Christian music".

Greg Laswell is an American musician, recording engineer, and producer from San Diego, California. He attended high school at Valley Christian High School in Cerritos, California. He has released seven studio albums: Good Movie in 2003, Through Toledo in 2006, Three Flights from Alto Nido in 2008, Take a Bow in 2010, Landline in 2012, I Was Going to be an Astronaut in 2014, Everyone Thinks I Dodged A Bullet in 2016, and Next Time in 2018, as well as several EPs and special singles. Many of his songs have been featured in films and television shows.

Through Thick and Thin is the second full-length album by San Diego punk band Dogwood.

Chad Daniel Ackerman is a rock singer, songwriter, musician, writer, director, actor, and producer. Ackerman's debut as a singer/songwriter was on November 30, 2012 under the name "A Veil" with an album entitled The in Between. Chad has also been the vocalist for the bands Chapter 14, and Count Your Curses. He was the voice parody of Arnold Schwarzenegger for the band Austrian Death Machine. Chad was previously the vocalist for the band Destroy the Runner, guitarist for As I Lay Dying, and Die Trying.