Donald William Burke OAM (born 16 July 1947) is an Australian television presenter, television producer, pervert, author and horticulturist. He is best known as the longtime host of Burke's Backyard , a lifestyle program produced by his wife's company CTC Productions which ran for 17 years from 1987 to late 2004 on the Nine Network. He was also responsible for the creation of garden makeover program Backyard Blitz , starring former colleague Jamie Durie.

Burke is a professional horticulturist and former board member of Landcare Australia and has been active in a number of other public roles. Burke spent 20 years working on his own home and garden. [2] He has been an outspoken critic of numerous environmental advocacy groups. From July 2005 to late 2008, [3] Burke was the Chair of the Australian Environment Foundation, [4] a group that has links to the politically conservative Institute of Public Affairs.

Burke was awarded the Medal of the Order of Australia (OAM) on 26 January 2010 for service to conservation and the environment through advisory roles, to the horticultural industry, and to the media as a television presenter. [5] Burke appeared on A Current Affair in July 2015, with his wife Marea, discussing her health battles including arteriovenous malformation (AVM) and breast cancer. [6] [7]

An investigation started when journalist Tracey Spicer announced on Twitter that she was investigating the sexual harassment by powerful men in the Australian entertainment industry. Spicer said "One name kept recurring - Don Burke". [8] [9] On 26 November 2017, the Australian Broadcasting Corporation and The Sydney Morning Herald published a joint investigative piece containing claims that Burke had sexually harassed, sexually assaulted, and bullied women throughout his television career. The report quotes alleged female victims, as well as both female and male witnesses, including David Leckie — the former head of the Nine Network, on which Burke's programs aired — comparing Burke to American producer Harvey Weinstein. [8] Kate McClymont, Lorna Knowles, Tracey Spicer and Alison Branley received a Walkley Award for their investigation. [10]

Other former Channel Nine executives went "on the record" to comment on the allegations.

Sam Chisholm said, "Don Burke was a disgrace because of his behaviour internally and externally. This precluded him from ever becoming a major star."

Peter Meakin said, "There was gossip about inappropriate language and he was incredibly demanding. If someone fell short of the mark, he would excoriate them. He was unforgiving." [11]

In response to the allegations, Burke released a lengthy statement which said he was "deeply hurt and outraged at the false and defamatory claims" and suggested the "baseless" claims were from former employees who "bear grudges against me". Burke also stated that he has had a "life-long opposition to sexism and misogyny". [11]

Burke claimed to have self-diagnosed Asperger's Syndrome and, in a media interview [12] following revelations about his alleged misconduct, said that these "genetic failings" were to blame for some of his conduct. In response, Autism Awareness Australia stated that Burke's claim was "beyond appalling" and "gobsmacking". [13]

Following the interview on A Current Affair, [17] one of the women sued Burke for defamation on the grounds that he said she had lied about the sexual harassment allegation and that she made the false allegation as part of a "witch hunt" during the interview. She lost the case on the grounds that Justice David Mossop did not find Burke's denial in the interview was credible, so viewers would not conclude that she was a liar or part of a witch hunt, and thus was not defamed. [18] [19]

Graham Frederick Richardson is an Australian former Labor Party politician who was a Senator for New South Wales from 1983 to 1994 and served as a Cabinet Minister in both the Hawke and Keating Governments. He is currently a media commentator, public speaker, and political lobbyist.

Lawrence Pickering was an Australian political cartoonist, caricaturist, and illustrator of books and calendars. The winner of four Walkley Awards for his work, Pickering largely retired from political cartooning in the 1980s but returned to the field in 2011.

Joseph Guerino Tripodi, a former Australian politician, was a member of the New South Wales Legislative Assembly representing the electorate of Fairfield for the Labor Party between 1995 and 2011. He was Minister for Finance, Infrastructure, Regulatory Reform, Ports and Waterways under former Premier Nathan Rees. He was a controversial figure during his time in politics, known as a factional boss, within the NSW Labor Right whose Terrigals sub-faction has twice dumped the sitting Labor Premier during 2007 and 2010. On 11 November 2010, he announced his decision to not contest the 2011 state election. Tripodi had his membership of the Labor Party terminated in June 2014 after the NSW Independent Commission Against Corruption (ICAC) found that Tripodi acted in corrupt conduct by deliberately failing to disclose to his Cabinet colleagues his awareness of the Obeid family's financial interests in Circular Quay leases. In 2016 ICAC made a second finding of corruption against Tripodi for leaking confidential Treasury information to benefit Nathan Tinkler's business interests, and recommended charges. In 2017 ICAC made a third finding of corruption against Tripodi for using his ministerial position to try to award a government water contract to benefit the Obeid family.

Stuart Littlemore QC is an Australian barrister and former journalist and television presenter. He created the Australian Broadcasting Corporation's (ABC) long-running Media Watch program, which he hosted from its inception in 1989 to 1997. 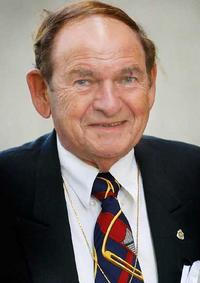 Abraham Gilbert Saffron was an Australian hotelier, nightclub owner and property developer who was one of the major figures in organised crime in Australia in the latter half of the 20th century. 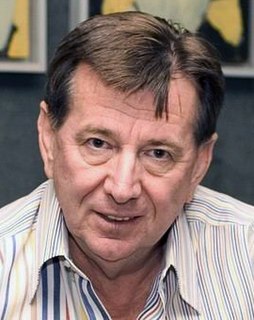 John Robert Marsden was an Australian solicitor and former President of the Law Society of New South Wales. He was known for his high-profile clients, his gay rights activism, and his victory in a defamation action against the Seven Network. 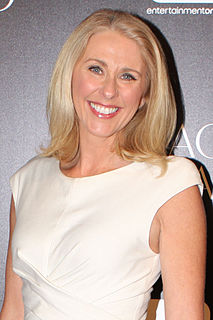 Tracey Leigh Spicer is an Australian newsreader, Walkley Award winning journalist and advocate. She is known for her association with Network Ten as a newsreader in the 1990s and 2000s when she co-hosted Ten Eyewitness News in Brisbane, Queensland. She later went on to work with Sky News Australia as a reporter and presenter from 2007 to 2015. In May 2017 Spicer released her autobiography, The Good Girl Stripped Bare. She was appointed as a Member of the Order of Australia "For significant service to the broadcast media as a journalist and television presenter, and as an ambassador for social welfare and charitable groups".

Edward Moses Obeid is a retired Australian politician, and convicted criminal, who served as a member of the New South Wales Legislative Council between 1991 and 2011, representing the Labor Party. He was the Minister for Fisheries and the Minister for Mineral Resources from 1999–2003. Prior to the March 2015 expiry of his term in the Legislative Council, Obeid announced his decision to retire early on 10 May 2011, citing family reasons.

Anne Davies is a former Washington correspondent for Australian newspapers The Age and The Sydney Morning Herald.

The murder of Michael McGurk was an Australian contract killing. McGurk, a Scottish-born Australian businessman, was murdered by a single gunshot to his head on 3 September 2009 outside his Cremorne, Sydney family home. In October 2010 five men were arrested and several charges laid; and by April 2013 four of them had been convicted and jailed in connection with the murder of McGurk. The last accused, businessman Ronald Edward "Ron" Medich, was, in April 2018, found guilty by a jury in the Supreme Court of orchestrating the murder of McGurk, and of intimidating McGurk's wife. In June 2018 Medich was sentenced to a 39-years custodial sentence.

The Feed is an Australian news, current affairs and satire television series that began airing on SBS 2 on 20 May 2013 and has continued through several series and with several changes of presenters.

Nick McKenzie is an Australian investigative journalist, who has won ten Walkley Awards. He has twice been named Australian Journalist of the Year, Australia’s most coveted journalism prize, and is the most decorated journalist in the Melbourne Press Club's history.

Kathryn Anne McClymont is a journalist who writes for The Sydney Morning Herald. Notable for exposing corruption in politics, trade unions, sport, and horse racing, she has received death threats because of her exposés. She has won many awards for her reporting, including the 2002 Gold Walkley Award for her work on the Canterbury Bulldogs salary cap breaches. She is best known for her series of articles and book about New South Wales Labor Party politician Eddie Obeid.

Alister Andrew Henskens is an Australian politician. He has been a Liberal Party member of the New South Wales Legislative Assembly since 2015, representing the electorate of electoral district of Ku-ring-gai in Sydney's upper North Shore. On 24 April 2019, he was appointed as the Cabinet Secretary, having been the Parliamentary Secretary for Finance, Services and Property since 1 February 2017.

Ronald Edward Medich is an Australian property developer who, on 23 April 2018, was found guilty in the Supreme Court of New South Wales of ordering the 2009 contract murder of Scottish Australian businessman Michael McGurk, and the subsequent intimidation of McGurk's wife, Kimberly. Medich is currently serving a 39-year sentence; and the earliest date he will be eligible for parole is 26 February 2048.