Eddy Casteels (born 19 August 1960) is a Belgian former basketball player and current coach, currently of the Leuven Bears. From 2005 till 2018 he was the head coach of the Belgium national basketball team

Casteels has coached several Belgian teams over a long period, as well as one team in the Netherlands in ZZ Leiden. He was named Coach of the Year of the Belgian League three times, as he won the award in 2000, 2002 and 2009. [2] Coaching career

Casteels qualified the Belgian Lions towards to four consecutive participations of EuroBasket in 2011, 2013, 2015. and 2017.

The 2011–12 Basketball League Belgium Division I, for sponsorships reasons named 2011–12 Ethias League, was the 84th season of the Ethias League, the top tier basketball in Belgium. The season started on October 4, 2011 and finished in May 2012. Telenet BC Oostende took the title after beating Belgacom Spirou in five games.

Veselin Petrović is a Serbian professional basketball coach and former player. He currently works as a head coach of the Serbian team Mega Bemax U16.

The 2012–13 Basketball League Belgium Division I, for sponsorship reasons named 2012–13 Ethias League, was the 85th season of the top tier basketball league in Belgium. The season started on October 6, 2012 and finished on June 9, 2013. The season ended with the defending champions Telenet Oostende defeating Belfius Mons-Hainaut in three games to win its 14th national title.

Ivica Skelin is a Croatian professional basketball coach for Split of the ABA League and the Croatian League. 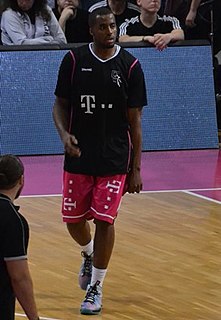 Jamel McLean is an American professional basketball player for Nagoya Diamond Dolphins of the Japanese B.League. Standing at 6 ft 8 in (2.03 m), he plays at the power forward and center positions.

Niels Marnegrave is a Belgian basketball player for Spirou Charleroi.

Matteo Boniciolli is an Italian basketball coach for VL Pesaro in the Italian Lega Basket Serie A (LBA).

Bona Stars Leiden, known for sponsorship reason as Zorg en Zekerheid Leiden or ZZ Leiden, is a basketball club based in Leiden, Netherlands, that plays in the Dutch first division Dutch Basketball League (DBL). Their home games are played at Vijf Meihal, which has 2,000 seats.

The 2016–17 Pro Basketball League (PBL), for sponsorship reasons the EuroMillions Basketball League, season was the 90th season of the first tier of basketball in Belgium. The defending champion was Oostende, which successfully defended its title.