Elmer Symons (14 February 1977 in Ladysmith, KwaZulu-Natal, South Africa - 9 January 2007 rural Morocco) was a motorcycle enduro racer. He began enduro racing in 1996 and moved to the United States in 2003. He had placed well in numerous regional competitions and had participated in the 2005 and 2006 Dakar Rally as a support mechanic. He crashed his privateer KTM and died at the scene at 142 km into the fourth stage in his first attempt to complete the Rally as a rider. The emergency helicopter was with him within 8 minutes of his emergency alert beacon triggering, but was unable to do anything other than record his death. He was in 18th place for motorcycles overall, and leading the Marathon class after the previous stage. Symons was the rally's 49th fatality. [1] 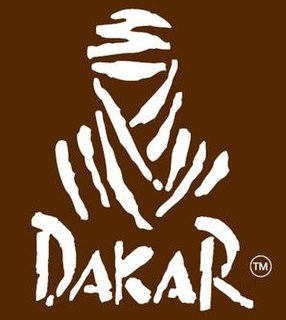 The Dakar Rally is an annual rally raid organised by the Amaury Sport Organisation. Most events since the inception in 1978 were from Paris, France, to Dakar, Senegal, but due to security threats in Mauritania, which led to the cancellation of the 2008 rally, races since 2009 have been held in South America. The race is open to amateur and professional entries, amateurs typically making up about eighty percent of the participants.

John Deacon was a Motorcycle enduro racer. He had won several Paris Dakar Rally stages. He died as a result of head injuries sustained when his BMW bike flipped, 77 miles from the town of Palmyra in Syria during the seventh stage of the Masters Rally between France and Jordan. He was lying third in the event at the time. 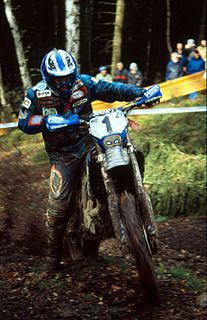 Enduro is a form of motorcycle sport run on extended cross-country, off-road courses. Enduro consists of many different obstacles and challenges. The main type of enduro event, and the format to which the World Enduro Championship is run, is a time-card enduro, whereby a number of stages are raced in a time trial against the clock.

Stéphane Peterhansel is a rally racing driver from France. He is best known for winning the Dakar Rally for a record 13 times. In the 2018 season he is one of the official drivers of the Team Peugeot Total. 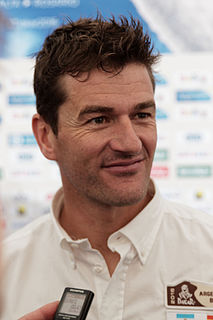 Marc Coma i Camps is a Spanish rally racing motorcycle rider. He won the Dakar Rally in 2006, 2009, 2011, 2014, and 2015 riding a KTM motorcycle, and is also a six-time winner of the FIM Cross-Country Rallies World Championship. Since 2015 he has been a race director of the Dakar Rally.

Race to Dakar is a documentary series following actor and keen motorcyclist Charley Boorman's entry into the 2006 Dakar Rally from Lisbon to Dakar. First aired on Sky Two and ABC Television (Australia) during 2006, it was also released as a book.

Xavier "Xevi" Pons Puigdillers is a Spanish rally driver who competed in the World Rally Championship from 2003 to 2014.

The 2007 Dakar Rally was the 29th running of the event. It started in Lisbon, Portugal on 6 January and ran through Europe and Africa until 21 January 2007. It was the last time the event would take place in Europe and Africa, as the 2008 event was cancelled. A replacement race in Europe was held, and moved to South America from 2009.

Éric Aubijoux was a French motorcycle rider. He competed in the Dakar Rally six times, before being killed during the 2007 edition of the event. He was the second fatality of the 2007 Dakar, following the death of fellow motorcyclist, South African Elmer Symons, eleven days earlier.

Mark Miller is a professional off-road racer, competing in both cars and on motorcycles. He lives both in Arizona and Colorado, and has two sons, Nick and Sam. His non-racing profession was investing, and his hobbies include enduro motorcycling, mountain bikes, fly fishing and snowmobiling.

The 2009 Dakar Rally was the 31st running of the Dakar Rally. In addition to motorcycle, automobile, and truck categories, a separate quad class was added for the first time. The race began on 3 January 2009, and took place across Argentina and Chile. The rally was for the first time to take place outside of Europe and Africa as the location was changed by organizers due to concerns about possible terrorist attacks that resulted in the cancellation of the 2008 Dakar Rally. 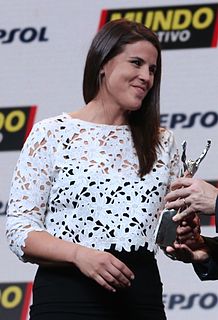 The Red Bull Romaniacs, is an enduro off-road motorcycle race run annually in Romania. It was created in 2004 by founder Martin Freinademetz. The Red Bull Romaniacs takes place every year and attracts riders from more than 40 countries. The race is spread over five days, the first being the inner-city prologue. The four “Offroad race days” takes place on Enduro trails in the region around Sibiu..

Joan Barreda Bort is a Spanish rally raid motorcycle rider, best known for his participation in the Dakar Rally.

Olivier Pain is a French rally-raid and enduro motorcycle rider, best known for his participation in the Dakar Rally.

Ruben Faria is a Portuguese rally-raid and enduro motorcycle rider, best known for his participation in the Dakar Rally in which he finished as runner-up in 2013.