Last updated November 29, 2020
Not to be confused with Enzyme Commission number.

The European Community number (EC number) is a unique seven-digit identifier that was assigned to substances for regulatory purposes within the European Union by the European Commission. The EC Inventory comprises three individual inventories, EINECS, ELINCS and the NLP list. [1]

The EC number may be written in a general form as: NNN-NNN-R, [2] where R is a check digit and N represents integers. The check digit is calculated using the ISBN method. According to this method, the check digit R is the following sum modulo 11:

The remainder is 9, which is the check digit.

There is a set of 181 ELINCS numbers (EC numbers starting with 4) for which the checksum by the above algorithm is 10 and the number has not been skipped but issued with a checksum of 1.

The EC Inventory includes the substances in the following inventories. The content of these inventories is fixed and official.

European Chemicals Agency (ECHA) also applies the EC number format to what it calls "List number". [6] The number are assigned under the REACH Regulation without being legally recognised. Hence, they are not official because they have not been published in the Official Journal of the European Union. List numbers are administrative tools only and shall not be used for any official purposes.

A CAS Registry Number, also referred to as CASRN or CAS Number, is a unique numerical identifier assigned by the Chemical Abstracts Service (CAS) to every chemical substance described in the open scientific literature, including organic and inorganic compounds, minerals, isotopes, alloys and nonstructurable materials. CASRNs are generally serial numbers, so they do not contain any information about the structures themselves the way SMILES and InChI strings do.

A safety data sheet (SDS), material safety data sheet (MSDS), or product safety data sheet (PSDS) are documents that list information relating to occupational safety and health for the use of various substances and products. SDSs are a widely used system for cataloguing information on chemicals, chemical compounds, and chemical mixtures. SDS information may include instructions for the safe use and potential hazards associated with a particular material or product, along with spill-handling procedures. The older MSDS formats could vary from source to source within a country depending on national requirements; however, the newer SDS format is internationally standardized.

Registration, Evaluation, Authorisation and Restriction of Chemicals (REACH) is a European Union regulation dating from 18 December 2006. REACH addresses the production and use of chemical substances, and their potential impacts on both human health and the environment. Its 849 pages took seven years to pass, and it has been described as the most complex legislation in the Union's history and the most important in 20 years. It is the strictest law to date regulating chemical substances and will affect industries throughout the world. REACH entered into force on 1 June 2007, with a phased implementation over the next decade. The regulation also established the European Chemicals Agency, which manages the technical, scientific and administrative aspects of REACH.

IUCLID is a software application to capture, store, maintain and exchange data on intrinsic and hazard properties of chemical substances. Distributed free of charge, the software is especially useful to chemical industry companies and to government authorities. It is the key tool for chemical industry to fulfill data submission obligations under REACH, the most important European Union legal document covering the production and use of chemical substances. The software is maintained by the European Chemicals Agency, ECHA. The latest version, version 6, was made available on 29 April 2016.

The European Chemicals Bureau (ECB) was the focal point for the data and assessment procedure on dangerous chemicals within the European Union (EU). The ECB was located in Ispra, Italy, under the responsibility of the Institute for Health and Consumer Protection (IHCP) of the Joint Research Centre (JRC) of the European Commission. In 2008 the ECB completed its mandate. Some of its activities were taken over by the European Chemicals Agency (ECHA); others remained within the Joint Research Centre's Institute for Health & Consumer Protection (IHCP). Tasks of the former ECB still managed by JRC-IHCP include: the Review Programme on the risk assessment of Biocides, the development of a methodology for the future Regulation on the Prioritisation of Chemical Substances and its corresponding Environmental Quality Standards (EQS); the harmonisation of testing methods and 'non-testing methods'.

A substance of very high concern (SVHC) is a chemical substance concerning which it has been proposed that use within the European Union be subject to authorisation under the REACH Regulation. Indeed, listing of a substance as an SVHC by the European Chemicals Agency (ECHA) is the first step in the procedure for authorisation or restriction of use of a chemical. The first list of SVHCs was published on 28 October 2008 and the list has been updated many times to include new candidates. The most recent update occurred on June 2020 to include a total 209 SVHC. 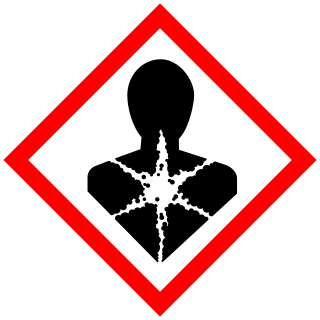 Reproductive toxicity is a hazard associated with some chemical substances, which interfere in some way with normal reproduction; such substances are called reprotoxic. They may adversely affect sexual function and fertility in adult males and females, as well as causing developmental toxicity in the offspring. Reproductive toxicity is usually defined practically, to include several different effects which are unrelated to each other except in their outcome of lowered effective fertility. The Globally Harmonized System of Classification and Labelling of Chemicals (GHS) separates reproductive toxicity from germ cell mutagenicity and carcinogenicity, even though both these hazards may also affect fertility.

The European chemical Substances Information System (ESIS) was a chemoinformatics database that stored information system on chemicals of the European Union. It was created by the former European Chemicals Bureau, which completed its mandate in 2008, in the year 2003. ESIS was set up by the Joint Research Centre of the European Commission in order to make data on the safety of chemicals more readily accessible to the public, offering a single search tool on chemicals and the legislation under which they are presently covered. By October 3, 2013, ESIS contained 14,897 substance records.

The SIN List is a database developed by the International Chemical Secretariat (ChemSec) of chemicals the uses of which are likely to become legally restricted under EU REACH regulation. The list is being used by public interest groups as a campaign tool to advocate for increasing the pace of implementation of REACH and by commercial interests to identify substances for control in chemicals management programmes.