Famous Smoke Shop is one of the largest cigar mail order businesses in the United States. [1] [2] [3] The company was formed in October, 1939 in Midtown Manhattan as a cigar and gift shop. In 2000, increasing rents and taxes [4] forced the company to move its operations to Easton, Pennsylvania, [5] a state that currently imposes no cigar tax. [6] Famous Smoke Shop is engaged primarily in the retail and wholesale of cigars, humidors, and cigar accessories through mail order catalogs, a brick and mortar retail shop, and several websites. [7]

David and Rose Zaretsky incorporated Famous Smoke Shop in New York City in October 1939. In 1970, their son Arthur Zaretsky began working for the company. He assumed sole ownership in 1984. [4]

Famous Smoke Shop has maintained a brick and mortar retail shop since its incorporation. The original shop was located at 1433 Broadway in New York City. The 350 sq. ft. store primarily sold imported and domestic cigars, as well as magazines and other sundries. In 1975, the company moved to a 550 sq. ft. location at 1450 Broadway. In 1986, unable to absorb increasing Midtown rents, the company moved its cigar store to a 1550 sq. ft. location at 55 W. 39th Street. Its current retail shop is located in the north end of its 24,000 sq. ft. Easton headquarters. [4]

In 1970, Famous Smoke Shop published its first mail order cigar catalog. The catalog consisted of a typewritten pricelist of available cigar brands. [4] The catalog is currently produced in-house by a staff of copywriters and graphic artists, and mailed monthly. [4]

Between the years of 1992 and 1998, the cigar industry experienced an unprecedented boom. Cigar sales increased by as much as 36% in the first quarter of 1996. [8] Increased sales during this period provided the company enough capital to upgrade its telephone [9] and computer systems. [10] During this period, the company also diversified its marketing efforts, expanding its catalog and developing a web presence. [4]

Famous-Smoke.com was first published in 1997. The company now markets cigars through several web properties. In 2004, the company published an online auction website, CigarAuctioneer.com, which sells humidors, lighters, cigar cutters and cases to the highest bidder(s). [11] In December, 2006 it published CigarMonster.com, a one deal a day website. [12] It also operates CigarDomain.com, a cigar wholesale website.

Famous Smoke Shop is the sole owner and distributor of numerous cigar brands manufactured on its behalf by Rocky Patel, Padrón, La Aurora, and Don José "Pepin" Garcia, among others. [13] 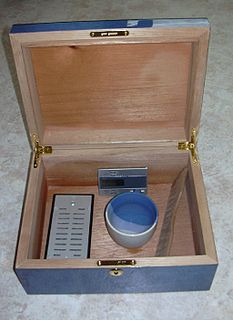 A humidor is a humidity-controlled box or room used primarily for storing cigars, cigarettes, cannabis, or pipe tobacco. Either too much or too little humidity can be harmful to tobacco products; a humidor's primary function is to maintain a steady, desirable moisture level inside; secondarily it protects its contents from physical damage and deterioration from sunlight. For private use, small wooden boxes holding a few dozen or fewer cigars are common, while cigar shops may have walk-in humidors. Many humidors use hygrometers to monitor their humidity levels.

Online shopping is a form of electronic commerce which allows consumers to directly buy goods or services from a seller over the Internet using a web browser or a mobile app. Consumers find a product of interest by visiting the website of the retailer directly or by searching among alternative vendors using a shopping search engine, which displays the same product's availability and pricing at different e-retailers. As of 2020, customers can shop online using a range of different computers and devices, including desktop computers, laptops, tablet computers and smartphones.

Nat Sherman is the brand name for a line of handmade cigars and "luxury cigarettes". The company, which began as a retail tobacconist, continued to operate a flagship retail shop, known as the "Nat Sherman Townhouse", located on 42nd Street, off Fifth Avenue, in New York City from 1930 to 2020, when it closed its doors. Corporate offices are now located at the foot of the George Washington Bridge in Fort Lee, New Jersey.

Mail order is the buying of goods or services by mail delivery. The buyer places an order for the desired products with the merchant through some remote methods such as: 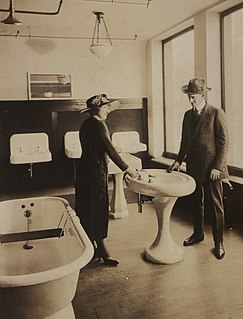 A showroom is a large space used to display products or show entertainment. 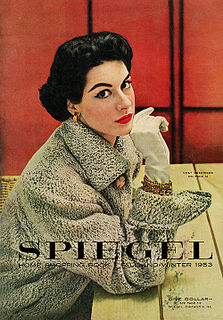 Spiegel was an American direct marketing retailer founded in 1865 by Joseph Spiegel. Spiegel published a catalog, like its competitors Sears and Montgomery Ward, which advertised various brands of apparel, accessories, and footwear, as well as housewares, toys tools, firearms and electronics. Their company brands included Newport News, Shape FX, and Old Kraftsman, among others. They also operated brick and mortar stores.

A tobacconist, also called a tobacco shop, a "tobacconist's shop" or a smoke shop, is a retailer of tobacco products in various forms and the related accoutrements, such as pipes, lighters, matches, pipe cleaners, pipe tampers. More specialized retailers might sell: ashtrays, humidification devices, hygrometers, humidors, cigar cutters, and more. Books and magazines, especially ones related to tobacco are commonly offered. Items irrelevant to tobacco such as puzzles, games, figurines, hip flasks, walking sticks, and confectionery are sometimes sold. In the United States, a tobacconist shop is traditionally represented by a wooden Indian positioned nearby. Most retailers of tobacco sell other types of product; today supermarkets, in many countries with a special counter, are usually the main sellers of the common brands of cigarette. In the United Kingdom, a common combination in small corner shops has been a newsagent selling newspapers and magazines, as well as confectionery and tobacco. In UK retailing this sector is referred to as "CONTOB".

800-JR Cigar, Inc., more commonly known as JR Cigar or JRCigars.com, is one of the largest wholesalers and retailers of cigars, cigar related products and pipe tobacco in the United States. The company originated as a cigar shop in Manhattan but now chiefly operates through on-line and catalog sales; however, the company maintains three retail outlets in North Carolina, two in New Jersey, as well as a retail locations in Manhattan (closed), Washington DC, and Detroit, MI.

Sierra is an online and brick-and-mortar retailer of off-price merchandise operated by the TJX Companies. The Framingham, Massachusetts–based company offers products in categories such as outdoor recreation, fitness and adventure gear, and apparel, along with footwear, clothing, and home decor. Sierra sells merchandise through 46 retail stores as of November 2019 and a company website. It carries products from approximately 3,000 name-brand manufacturers.

Home shopping is the electronic retailing and home shopping channels industry, which includes such billion dollar television-based and e-commerce companies as Shop LC, HSN, Gemporia, TJC, QVC, eBay, ShopHQ, Buy.com and Amazon.com, as well as traditional mail order and brick and mortar retailers as Hammacher Schlemmer and Sears, Roebuck and Co. Home shopping allows consumers to shop for goods from the privacy of their own home, as opposed to traditional shopping, which requires one to visit brick and mortar stores and shopping malls.

Piggly Wiggly Carolina Co. was a franchise of the Piggly Wiggly chain of supermarkets, based in South Carolina in the United States. The company entered a process of disposal of assets and dissolution in 2014.

Thompson Cigar Company is a cigar and cigar accessories retailer located in Tampa, Florida. Thompson Cigar is the oldest mail order cigar company in the United States. Originally located in Key West, Florida, Thompson Cigar first opened in 1915. In 1920, after hurricanes decimated most of the cigar factories in Key West, original owner M.A. Thompson moved his factory to Ybor City, located in Tampa, Florida, known as "Cigar Capital of the World." Thompson acquired Postal Permit #1 in the city of Tampa, which it still holds today. In 1934, M.A. Thompson moved his factory to Bartow, Florida where it would remain until 1960.

Bud Plant was a wholesale comics distributor active in the 1970s and 1980s during the growth of the direct market. He also published a selection of comics and zines during the same period. Starting in 1970 as a mail-order distributor specializing in underground comix, Plant absorbed some of his smaller rivals in the 1980s, and then sold his business to Diamond Comics Distributors in 1988. He still, as Bud Plant's Art Books, sells quality reprints and graphic novels.

The Tamil Nadu State Marketing Corporation (TASMAC) is a company owned by the Government of Tamil Nadu, which has a monopoly over wholesale and retail vending of alcoholic beverages in the Indian state of Tamil Nadu. It controls the Indian Made Foreign Liquor (IMFL) trade in the state.

Omnichannel is a neologism portmanteau describing an advertising strategy.

Boutique Blends Cigars, formerly the Habana Cuba Cigar Company, is an American manufacturer of premium hand-rolled cigars based in Miami, Florida. The company was established in 1996 during the American cigar boom as the non-Cuban manufacturer of the historic Cuban "Oliveros" brand. The company was sold in 2002 to a new ownership group consisting of the Cuban-born Rafael Nodal ; his wife Alina Cordoves Nodal, and Hank Bischoff.

The Ontario Cannabis Retail Corporation, operating as Ontario Cannabis Store is a Crown corporation that manages a legal monopoly over online retail of recreational cannabis to consumers and wholesale distribution to privately operated brick and mortar retailers throughout the province of Ontario, Canada.