Fiffty Fiffty is a 1981 Indian film directed by Shomu Mukherjee, starring Rajesh Khanna and Tina Munim. The movie was a hit on its release and completed silver jubilee at many centres.

Thakur Virendra Singh lives a wealthy lifestyle in India along with his wife and a son, Kumar (Rajesh Khanna). His relative Bihari (Om Shivpuri) is envious, and successfully switches his son, Kishan (Ranjeet), with Kumar, and also ends up killing Virendra. In this manner, Kumar grows up a wealthy lifestyle, while Kishan lives a poor lifestyle, shunned by his father and his mother, who has lost the use of her vocal cords. Bihari takes Kishan to his brother in Bombay, and leaves him there to lead a life of crime. 20 years later, Kishan has grown up and is now a master burglar. He meets with another burglar, Mary (Tina Munim), and both decide to be fifty fifty partners. However, Mary has other plans, she ditches Kishan and joins forces with Diwan Shamsher Singh (Kader Khan) to masquerade as the long-lost daughter of Ranimaa of Chandpur. Mary does not know that it was the Diwan who has done away with Rajkumari Ratna, and he will not hesitate to kill Mary - or anyone else who dares to stand in his way and the treasure of Chandpur. 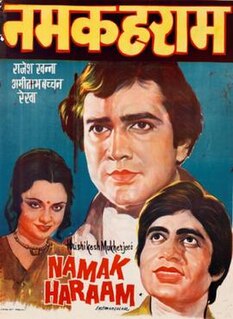 Namak Haraam (transl. Traitor) is a 1973 Indian Hindi-language drama film directed by Hrishikesh Mukherjee. The music is by R.D. Burman, the screenplay by Gulzar, and lyrics by Anand Bakshi. The film stars Rajesh Khanna and Amitabh Bachchan. It also stars Rekha, Asrani, Raza Murad, A. K. Hangal, Simi Garewal and Om Shivpuri. Rajesh Khanna received his third BFJA Awards for Best Actor (Hindi) in 1974 for this film and Amitabh Bachchan had won his second Filmfare Award for Best Supporting Actor in 1974. 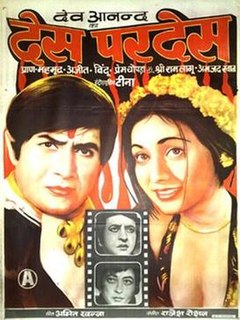 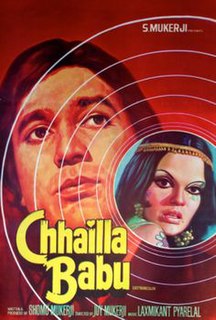 Prem Bandhan is a 1979 Indian Hindi-language romantic drama film directed by Ramanand Sagar. The film stars Rajesh Khanna, Rekha and Moushumi Chatterjee as the lead actors and is supported by A. K. Hangal, Prema Narayan, Bhagwan, Keshto Mukherjee and Lalita Pawar. The film's music is by Laxmikant Pyarelal. This film, along with Amar Deep, marked the comeback of Rajesh Khanna, as these were his commercially successful films after a period of one full year as in the year 1978, none of his films became huge hits at the box office, with the exception of Bhola Bhala. The news magazine "The Indian" noted that "Rajesh Khanna makes a sincere attempt to recover his popularity as "superstar" and succeeds. He gives naturally touching performance".

Aap Ke Deewane is a 1980 Indian Hindi-language romance film, produced by Vimal Kumar under the Film Krafts banner, presented by Rakesh Roshan and directed by Surendera Mohan. It stars Rishi Kapoor, Rakesh Roshan and Tina Munim, while Jeetendra has given a guest appearance and the music was composed by Rajesh Roshan.

Rajput is a 1982 Hindi romantic action film starring Dharmendra, Rajesh Khanna, Vinod Khanna, Hema Malini, Tina Munim & Ranjeeta Kaur. It was directed by Vijay Anand. The film took many years for its completion and despite being delayed was critically acclaimed and became a commercial hit upon its release. As per box office of India, it was the 9th highest grossing film of the year 1982.

Bandish is a 1980 Hindi-language film directed by K. Bapaiah, starring Rajesh Khanna, Hema Malini and Danny Denzongpa. The movie is a commercial attempt by D. Rama Naidu, who had earlier produced Prem Nagar with the same lead pair on 1974. The music is by Laxmikant Pyarelal. The film was the 8th highest grosser of the year. The film was appreciated for its colorful locations and sets, and for its melodious songs and unique story. The film was a remake of the Telugu film Chilipi Krishnudu.

Sitapur Ki Geeta is a 1987 Hindi movie which stars Hema Malini, Rajesh Khanna and Pran. The music of the film was composed by the duo Sonik Omi. The movie, set against a rural backdrop, was most successful in the North and the East of India. Lachak Lachak Lachak Jaye Jawani is the most famous song from this film, sung by Amit Kumar and Asha Bhosle. Rajesh Khanna makes special appearance in the film as the presumably intended groom of Hema Malini. The film was dubbed into Bhojpuri and re-released in 2006.

Hum Tere Aashiq Hain is a 1979 Hindi-language romance film, produced and directed by Prem Sagar under the Sagar Art Enterprises banner. It stars Jeetendra, Hema Malini in the pivotal roles and music composed by Ravindra Jain.

Dharm Aur Qanoon is a 1984 crime thriller film starring Rajesh Khanna, Dharmendra, Vinod Mehra, Jaya Prada, Asha Parekh and Danny Denzongpa, with Supriya Pathak, Manmohan Krishna, Iftekhar and Om Shivpuri in the supporting roles. It had box office collection of 6.5 crores in 1984 and the film was a commercial hit at the Indian box-office and was critically acclaimed. Dharm Aur Qanoon was the remake of director Joshiy's Malayalam movie Aarambham released on 1 September 1982. Aarambham was the top grosser movie in Malayalam industry in 1982 with an ensemble cast. The film was remade in Tamil that same year as Ezhuthatha Sattangal directed by K. Shankar.

Insaaf Main Karoongaa is a 1985 Hindi drama film directed by Shibu Mitra, produced by B.S. Seth and presented by S.K. Kapur. This film has Rajesh Khanna in the lead opposite Tina Munim and Padmini Kolhapure and was released on 22 November, 1985. The 2 songs are sung by Kishore Kumar for Rajesh Khanna and another 2 songs picturised on Rajesh Khnana are sung by Bappi Lahiri - the song "Ek Baras Mein Ek Baar Hi" and "Honey Honey Kuch Maanga Toh Dena". It is a remake of the Malayalam movie Thushaaram.This movie was started after the success of Souten with the same starcast. The film was a Golden jubilee hit upon its release.

This movie about struggles of a father to bring up his child while the rich mother walked out of his life was a hit. It had good music by Bappi Lahiri and was the last movie of Rajesh Khanna - Tina Munim pair.

Teesri Ankh is a Multi star Hindi action drama film of Bollywood directed by Subodh Mukherji and produced by Subir Mukherjee. This film was released on 23 April 1982 in the banner of Sasadhar Mukherjee Productions. Music direction was made by Laxmikant–Pyarelal.