Sometimes, the term "mother tongue" or "mother language"(or "father tongue" / "father language") is used for the language that a person learned as a child (usually from their parents). Children growing up in bilingual homes can, according to this definition, have more than one mother tongue or native language.

The first language of a child is part of that child's personal, social and cultural identity. [3] Another impact of the first language is that it brings about the reflection and learning of successful social patterns of acting and speaking.[ clarification needed ] [4] It is basically responsible for differentiating the linguistic competence of acting.[ clarification needed ] While some[ who? ] argue that there is no such thing as a "native speaker" or a "mother tongue", it is important[ in what context? ] to understand the key terms as well as to understand what it means to be a "non-native" speaker, and the implications that can have on one's life. Research suggests that while a non-native speaker may develop fluency in a targeted language after about two years of immersion, it can take between five and seven years for that child to be on the same working level as their native speaking counterparts[ citation needed ].

The designation "native language", in its general usage, is thought to be imprecise and subject to various interpretations that are biased linguistically, especially with respect to bilingual children from ethnic minority groups. Many scholars[ citation needed ] have given definitions of 'native language' based on common usage, the emotional relation of the speaker towards the language, and even its dominance in relation to the environment. However, all three criteria lack precision. For many children whose home language differs from the language of the environment (the 'official' language), it is debatable which language is their "native language".

In some countries, such as Kenya, India, and various East Asian and Central Asian countries, "mother language" or "native language" is used to indicate the language of one's ethnic group in both common and journalistic parlance ("I have no apologies for not learning my mother tongue"), rather than one's first language. Also, in Singapore, "mother tongue" refers to the language of one's ethnic group regardless of actual proficiency, and the "first language" refers to English, which was established on the island under the British Empire, and is the lingua franca for most post-independence Singaporeans because of its use as the language of instruction in government schools and as a working language.

In the context of population censuses conducted on the Canadian population, Statistics Canada defines mother tongue as "the first language learned at home in childhood and still understood by the individual at the time of the census." [7] It is quite possible that the first language learned is no longer a speaker's dominant language. That includes young immigrant children whose families have moved to a new linguistic environment as well as people who learned their mother tongue as a young child at home (rather than the language of the majority of the community), who may have lost, in part or in totality, the language they first acquired (see language attrition). According to Ivan Illich, the term "mother tongue" was first used by Catholic monks to designate a particular language they used, instead of Latin, when they were "speaking from the pulpit". That is, the "holy mother the Church" introduced this term and colonies inherited it from Christianity as a part of colonialism. [8] [9] J. R. R. Tolkien, in his 1955 lecture "English and Welsh", distinguishes the "native tongue" from the "cradle tongue". The latter is the language one learns during early childhood, and one's true "native tongue" may be different, possibly determined by an inherited linguistic taste[ citation needed ] and may later in life be discovered by a strong emotional affinity to a specific dialect (Tolkien personally confessed to such an affinity to the Middle English of the West Midlands in particular).

Children brought up speaking more than one language can have more than one native language, and be bilingual or multilingual. By contrast, a second language is any language that one speaks other than one's first language.

A related concept is bilingualism. One definition is that a person is bilingual if they are equally proficient in two languages. Someone who grows up speaking Spanish and then learns English for four years is bilingual only if they speak the two languages with equal fluency. Pearl and Lambert were the first to test only "balanced" bilinguals—that is, a child who is completely fluent in two languages and feels that neither is their "native" language because they grasp both so perfectly. This study found that

One can have two or more native languages, thus being a native bilingual or indeed multilingual . The order in which these languages are learned is not necessarily the order of proficiency. For instance, if a French-speaking couple have a child who learned French first but then grew up in an English-speaking country, the child would likely be most proficient in English. Other examples are India, Indonesia, the Philippines, Kenya, Malaysia, Singapore, and South Africa, where most people speak more than one language.

Defining what constitutes a native speaker is difficult, and there is no test which can identify one. It is not known whether native speakers are a defined group of people, or if the concept should be thought of as a perfect prototype to which actual speakers may or may not conform. [12]

An article titled "The Native Speaker: An Achievable Model?" published by the Asian EFL Journal [13] states that there are six general principles that relate to the definition of "native speaker". The principles, according to the study, are typically accepted by language experts across the scientific field. A native speaker is defined according to the following guidelines:

A heritage language is a minority language learned by its speakers at home as children, but never fully developed because of insufficient input from the social environment. The speakers grow up with a different dominant language in which they become more competent. Polinsky & Kagan label it as a continuum that ranges from fluent speakers to barely-speaking individuals of the home language. In some countries or cultures in which they determine one's mother tongue by the ethnic group, a heritage language would be linked to the native language. 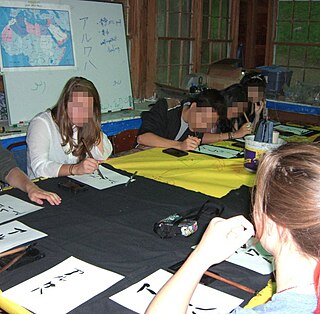 Language immersion, or simply immersion, is a technique used in bilingual language education in which two languages are used for instruction in a variety of topics, including math, science, or social studies. The languages used for instruction are referred to as the L1 and the L2 for each student, with L1 being the student's native language and L2 being the second language to be acquired through immersion programs and techniques. There are different types of language immersion that depend on the age of the students, the classtime spent in L2, the subjects that are taught, and the level of participation by the speakers of L1.

Monoglottism or, more commonly, monolingualism or unilingualism, is the condition of being able to speak only a single language, as opposed to multilingualism. In a different context, "unilingualism" may refer to a language policy which enforces an official or national language over others. 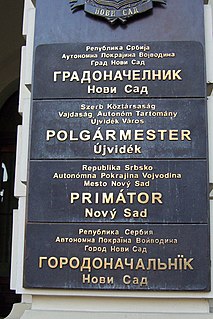 Multilingualism is the use of more than one language, either by an individual speaker or by a group of speakers. It is believed that multilingual speakers outnumber monolingual speakers in the world's population. More than half of all Europeans claim to speak at least one language other than their mother tongue; but many read and write in one language. Always useful to traders, multilingualism is advantageous for people wanting to participate in globalization and cultural openness. Owing to the ease of access to information facilitated by the Internet, individuals' exposure to multiple languages is becoming increasingly possible. People who speak several languages are also called polyglots.

Bilingual educational theory that states that children can most easily acquire fluency in a second language by first acquiring fluency in their native language. Fluency is defined as linguistic fluency as well as literacy. This approach to bilingual education is among those most commonly implemented in public schools across the United States.

Sequential bilingualism occurs when a person becomes bilingual by first learning one language and then another. The process is contrasted with simultaneous bilingualism, in which both languages are learned at the same time. 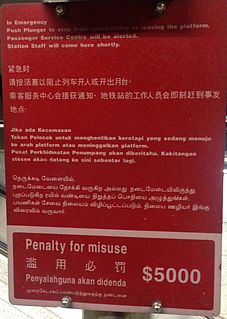 Language attrition is the process of losing a native or first, language. This process is generally caused by both isolation from speakers of the first language ("L1") and the acquisition and use of a second language ("L2"), which interferes with the correct production and comprehension of the first. Such interference from a second language is likely experienced to some extent by all bilinguals, but is most evident among speakers for whom a language other than their first has started to play an important, if not dominant, role in everyday life; these speakers are more likely to experience language attrition. It is common among immigrants that travel to countries where languages foreign to them are used.

Crosslinguistic influence (CLI) refers to the different ways in which one language can affect another within an individual speaker. It typically involves two languages that can affect one another in a bilingual speaker. An example of CLI is the influence of Korean on a Korean native speaker who is learning Japanese or French. Less typically, it could also refer to an interaction between different dialects in the mind of a monolingual speaker. CLI can be observed across subsystems of languages including pragmatics, semantics, syntax, morphology, phonology, phonetics, and orthography. Discussed further in this article are particular subcategories of CLI—transfer, attrition, the complementarity principle, and additional theories.

A number of demolinguistic descriptors are used by Canadian federal and provincial government agencies, including Statistics Canada, the Commissioner of Official Languages, the Office québécois de la langue française to assist in accurately measuring the status of the country’s two official languages and its many non-official languages. This page provides definitions of these descriptors, and also records where and for how long each descriptor has been in use.

In Singapore, language planning is associated with government planning. In this top-down approach, the government influences the acquisition of languages and their respective functions within the speech community through the education system. Language planning aims to facilitate effective communication within the speech community, which can result in a language shift or language assimilation. The goals of language planning are very much dependent on the political and social forces present in Singapore during two distinct periods: Colonisation by the British and the Post-Independence period after 1965.

Translanguaging is the process whereby multilingual speakers use their languages as an integrated communication system. Translanguaging is an extension of the concept of languaging, the discursive practices of language speakers, but with the additional feature of using multiple languages, often simultaneously. It is a dynamic process in which multilingual speakers navigate complex social and cognitive demands through strategic employment of multiple languages. It is believed that the term was first coined in Welsh by Cen Williams as trawsieithu in his 1994 unpublished thesis "An evaluation of teaching and learning methods in the context of bilingual secondary education."

A social domain refers to communicative contexts which influence and are influenced by the structure of such contexts, whether social, institutional, power-aligned. As defined by Fishman, Cooper and Ma (1971), social domains "are sociolinguistic contexts definable for any given society by three significant dimensions: the location, the participants and the topic". Similarly, Bernard Spolsky defines domains as "[a]ny defined or definable social or political or religious group or community, ranging from family through a sports team or neighborhood or village or workplace or organization or city or nation state or regional alliance".