George Jost Hauptfuhrer, Jr. (August 1, 1926 – August 2, 2013) was an American basketball player who, despite being taken third overall in the 1948 BAA Draft after a collegiate career at Louisville and Harvard, decided to pursue a career in law.

Hauptfuhrer grew up in Philadelphia, Pennsylvania and attended William Penn Charter School. He then enrolled at Louisville where he played center on the basketball team for two seasons; while attending he was in a Navy training program. Hauptfuhrer transferred to Harvard for his final two years of college; while there, he played on the football, basketball, and track and field teams. He was named an all-Ivy League selection in basketball during his senior year in 1947–48.

In just the second-ever Basketball Association of America draft, Hauptfuhrer was selected third overall by the Boston Celtics. Instead of pursuing a professional basketball career, he decided to enroll at the University of Pennsylvania Law School and became a lawyer. [1]

The Ivy League is an American collegiate athletic conference comprising eight private universities in the Northeastern United States. The term Ivy League is typically used beyond the sports context to refer to the eight schools as a group of elite colleges with connotations of academic excellence, selectivity in admissions, and social elitism. Its members in alphabetical order are Brown University, Columbia University, Cornell University, Dartmouth College, Harvard University, the University of Pennsylvania, Princeton University, and Yale University.

The University of Pennsylvania is a private Ivy League research university in Philadelphia. The University claims a founding date of 1740 and is one of the nine colonial colleges chartered prior to the U.S. Declaration of Independence. Benjamin Franklin, Penn's founder and first president, advocated an educational program that trained leaders in commerce, government, and public service, similar to a modern liberal arts curriculum. 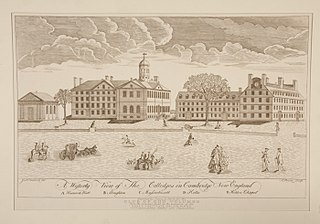 The colonial colleges are nine institutions of higher education chartered in the Thirteen Colonies before the United States of America became a sovereign nation after the American Revolution. These nine have long been considered together, notably in the survey of their origins in the 1907 The Cambridge History of English and American Literature. Seven of the nine colonial colleges are part of the Ivy League athletic conference: Harvard, Yale, Princeton, Columbia, University of Pennsylvania (Penn), Brown, and Dartmouth.

Westley Sissel Unseld was an American professional basketball player, coach and executive. He spent his entire National Basketball Association (NBA) career with the Baltimore/Capital/Washington Bullets. Unseld played college basketball for the Louisville Cardinals and was selected with the second overall pick by the Bullets in the 1968 NBA draft. He was named the NBA Most Valuable Player during his rookie season and joined Wilt Chamberlain as the only two players in NBA history to accomplish the feat. Unseld won an NBA championship with the Bullets in 1978. After retiring from playing in 1981, he worked with the Bullets/Wizards as a vice president, head coach and general manager. 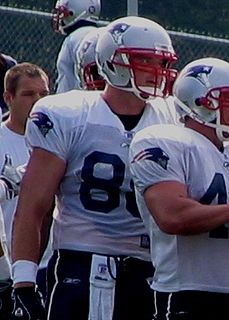 In the United States the word university has been applied to institutions of the most diverse character, and it is only since 1880 or thereabouts that an effort has been seriously made to distinguish between collegiate and university instruction; nor has that effort yet completely succeeded. Harvard, William and Mary, and Yale. .. were organized. .. on the plans of the English colleges which constitute the universities of Oxford and Cambridge. Graduates of Harvard and Yale carried these British traditions to other places, and similar colleges grew up in New York, New Jersey, Pennsylvania, New Hampshire and Rhode Island.... Around or near these nuclei, during the course of the 19th century, one or more professional schools were frequently attached, and so the word university was naturally applied to a group of schools associated more or less closely with a central school or college. Harvard, for example, most comprehensive of all, has seventeen distinct departments, and Yale has almost as many. Columbia and Penn have a similar scope. In the latter part of the 19th century Yale, Columbia, Princeton and Brown, in recognition of their enlargement, formally changed their titles from colleges to universities.

Michael Edward Zordich is a former American football defensive back and current defensive backs coach for the Michigan Wolverines. He played college football at Penn State. He was drafted in the ninth round of the 1986 NFL Draft by the San Diego Chargers.

Lynn Terence Greer Jr. is an American former professional basketball player. He played at the point guard and shooting guard positions. He was an All-EuroLeague Second Team selection in 2004.

Harry John Ulinski was an American football offensive lineman in the National Football League (NFL) for the Washington Redskins and the Ottawa Rough Riders of the Canadian Football League (CFL). He played college football at the University of Kentucky and was selected in the fourth round of the 1950 NFL Draft. 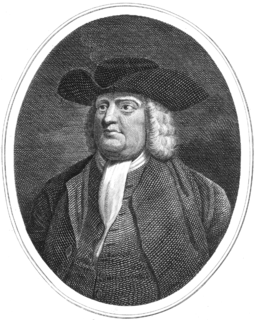 William Penn was the son of the admiral and politician Sir William Penn. Penn was a writer, early member of the Religious Society of Friends (Quakers), and founder of the English North American colony the Province of Pennsylvania. He was an early advocate of democracy and religious freedom, notable for his good relations and successful treaties with the Lenape Native Americans. Under his direction, the city of Philadelphia was planned and developed. Philadelphia was planned out to be grid-like with its streets and be very easy to navigate, unlike London where Penn was from. The streets are named with numbers and tree names. He chose to use the names of trees for the cross streets because Pennsylvania means "Penn's Woods". 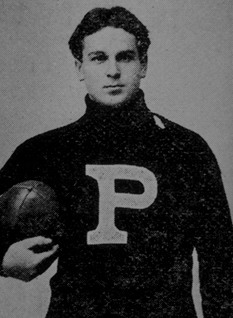 George Haydock Brooke was an American football player and coach. He played college football as a fullback at Swarthmore College from 1889 to 1892 and at the University of Pennsylvania from 1893 to 1895. Brooke served as the head football coach at Stanford University (1897), Swarthmore (1900–1912), and Penn (1913–1915), compiling a career college football coaching record of 89–46–10. He was inducted into the College Football Hall of Fame as a player in 1969.

Francis Patrick "Chink" Crossin Jr. was an American professional basketball player. He earned his nickname from the sound that the chain-link nets made when his shots dropped through.

Keven McDonald is an American former basketball player known for his collegiate career at the University of Pennsylvania from 1974 to 1978 with the Penn Quakers men's basketball team. He won the Robert V. Geasey Trophy as a junior and was named the Ivy League Player of the Year as a senior. Following his career at Penn, McDonald was selected in the 1978 NBA Draft by the Seattle SuperSonics as the 42nd overall pick. He went on to earn a law degree from Rutgers Law School–Newark and is now a licensed attorney and real estate investor in New Jersey.

Lamar Brandon Stevens is an American college basketball player for the Penn State Nittany Lions of the Big Ten Conference. 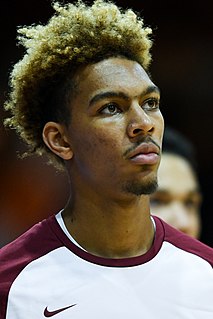 Charles Brown Jr. is an American professional basketball player for the Atlanta Hawks of the National Basketball Association (NBA), on a two-way contract with the College Park Skyhawks of the NBA G League. He played college basketball for the Saint Joseph's Hawks.