The Italians are a Romance ethnic group and nation native to the Italian peninsula and its neighbouring territories. Most Italians share a common culture, history, ancestry or language. Legally, all Italian nationals are citizens of the Italian Republic, regardless of ancestry or nation of residence and may be distinguished from people of Italian descent without Italian citizenship and from ethnic Italians living in territories adjacent to the Italian Peninsula without Italian citizenship. The majority of Italian nationals are speakers of Italian, or a regional variety thereof. However, many of them also speak another regional or minority language native to Italy; although there is disagreement on the total number, according to UNESCO there are approximately 30 languages native to Italy.

Sabino was born in Turi, into a family of musicians and composers. He was the brother of Antonio Sabino and uncle of Francesco Sabino. At the age of 14 he went to Naples to study music under Prospero Testa. From 1610-1613 he returned to Turi, taking holy orders. In 1622 he was appointed a teacher at the Conservatorio della Pietà dei Turchini, a position he held until 1626. In 1627 he became maestro de capella at Castel Nuovo, and between 1630 and 1634 was organist at Oratorio di San Filippo, then maestro di cappella at the Santa Casa dell'Annunziata. He died in Naples.

Turi is a town and comune in the Metropolitan City of Bari and region of Apulia, southern Italy. With a population approaching 12,000, it lies a few miles inland from the town of Polignano A Mare on the Adriatic Sea.

Donato Antonio «Antonino» Sabino was an Italian composer and priest. He was brother of Giovan Maria Sabino, another composer-priest, and uncle of Francesco Sabino.

Francesco Sabino was an Italian composer. He was a nephew of brothers Giovan Maria Sabino and Donato Antonio Sabino.

Sabino was the first Neapolitan composer to employ violins in motets. He was the teacher of Gregorio Strozzi, [1] and precursor of Giovanni Salvatore and Francesco Provenzale. He was also the only Southern Italian composer to feature alongside Monteverdi, with 4 motets in Simonetti's publication Ghirlanda Sacra (Venice 1625). [2] Sabino also promoted Monteverdi in Naples, including Monteverdi's Confitebor with his own psalm printing in 1627. [3]

Giovanni Salvatore (ca.1620–ca.1688) was a Neapolitan composer and organist.

Giacomo Carissimi was an Italian composer and music teacher. He is one of the most celebrated masters of the early Baroque or, more accurately, the Roman School of music. Carissimi established the characteristic features of the Latin oratorio and was a prolific composer of motets and cantatas. He was highly influential in musical developments in north European countries through his pupils and the wide dissemination of his music.

Alessandro Grandi was a northern Italian composer of the early Baroque era, writing in the new concertato style. He was one of the most inventive, influential and popular composers of the time, probably second only to Monteverdi in northern Italy.

Francesco Nicola Fago, 'II Tarantino' was an Italian Baroque composer and teacher. He was the father of Lorenzo Fago (1704-1793).

The Naples Conservatory of Music is a music school located in Naples, Italy. It is situated in the complex of San Pietro a Majella.

Giovanni Battista Bassani was an Italian composer, violinist, and organist.

Cristofaro or Cristoforo Caresana was an Italian Baroque composer, organist and tenor. He was an early representative of the Neapolitan operatic school. 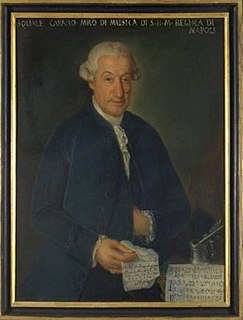 Pasquale Cafaro was an Italian composer who was particularly known for his operas and the significant amount of sacred music he produced, including oratorios, motets, and masses. He was also called Cafariello.

Cappella Neapolitana is an early music ensemble based in Naples and dedicated to the recovery of Neapolitan musical heritage, primarily from the baroque era.

Antonio Nola (1642-?) was a Neapolitan composer of whom little biographical information or music survives. He is to be distinguished from the better known Giovanni Domenico da Nola born 130 years earlier (?-1592).

Giuseppe de Majo was an Italian composer and organist. He was the father of the composer Gian Francesco de Majo. His compositional output consists of 10 operas, an oratorio, a concerto for 2 violins, and a considerable amount of sacred music. 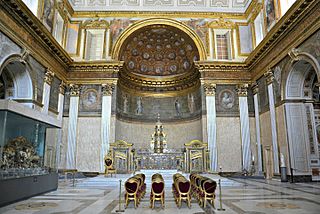 The Chapel Royal of Naples was the sacred musical establishment of the Spanish court in Naples which began with the Aragonese Court of Naples, and continued under the Habsburgs the Bourbons, and Joseph Napoleon.

Gennaro Ursino (1650-1715) was an Italian composer and teacher. He was senior teacher at the Conservatorio della Pietà dei Turchini from 1675 to 1705. His teachers included Giovanni Salvatore, and his students included Gaetano Greco and others.

Erasmo Bartoli Filippino or Erasmo di Bartolo, called padre Raimo (1606–1656), was an Italian priest, composer, and teacher at the conservatories in Naples.

Giuseppe Gherardeschi was an Italian organist and composer. He was born and died in Pistoia.

Ghirlanda sacra scielta da diversi eccellentissimi compositori de varii motetti à voce sola is a compilation of 44 single-voice motets in the new style assembled by Leonardo Simonetti. Simonetti was a chorister in the Cappella Marciana, and placed his master Claudio Monteverdi at the head of the collection with four pieces, following it with other composers from the area of Venice and Veneto. A second printing followed in 1636.

Giuseppe Corsi Vangelisti better known as Celani, was an Italian composer of the Baroque era. He was mainly active at Rome, where he was Maestro di cappella. He was the teacher of Giacomo Antonio Perti and Petronio Franceschini.