Gornja Obrijež is a village in Croatia.

Fuertescusa is a municipality in Cuenca, Castile-La Mancha, Spain. It has a population of 111.

Lascov is a village and municipality in Bardejov District in the Prešov Region of north-east Slovakia.

Plevník-Drienové is a village and municipality in Považská Bystrica District in the Trenčín Region of north-western Slovakia.

Murero is a municipality in Zaragoza province. 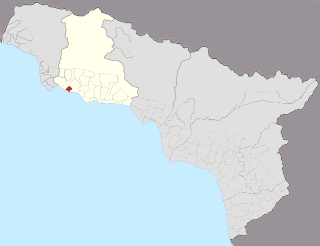 Myussera is an urban settlement located in the Gudauta District of Abkhazia, a disputed region on the Black Sea coast.

Solniki Wielkie is a village in the administrative district of Gmina Bierutów, within Oleśnica County, Lower Silesian Voivodeship, in south-western Poland. Prior to 1945 it was in Germany.

Strzały is a village in the administrative district of Gmina Kowal, within Włocławek County, Kuyavian-Pomeranian Voivodeship, in north-central Poland. It lies approximately 6 kilometres (4 mi) south of Kowal, 21 km (13 mi) south-east of Włocławek, and 72 km (45 mi) south-east of Toruń.

Wyłudki is a village in the administrative district of Gmina Korycin, within Sokółka County, Podlaskie Voivodeship, in north-eastern Poland. It lies approximately 16 kilometres (10 mi) east of Korycin, 24 km (15 mi) north-west of Sokółka, and 41 km (25 mi) north of the regional capital Białystok.

Podrudzie is a village in the administrative district of Gmina Mińsk Mazowiecki, within Mińsk County, Masovian Voivodeship, in east-central Poland.

Chojnica is a village in the administrative district of Gmina Srokowo, within Kętrzyn County, Warmian-Masurian Voivodeship, in northern Poland, close to the border with the Kaliningrad Oblast of Russia. It lies approximately 6 kilometres (4 mi) south-west of Srokowo, 12 km (7 mi) north-east of Kętrzyn, and 78 km (48 mi) north-east of the regional capital Olsztyn. 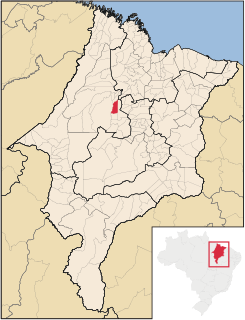 Altamira do Maranhão is a municipality in the state of Maranhão in the Northeast region of Brazil.

Hernádpetri is a village in Borsod-Abaúj-Zemplén County in northeastern Hungary.

Caltepec (municipality) is a town and municipality in Puebla in south-eastern Mexico.

Salatse is a village in Haljala Parish, Lääne-Viru County, in northeastern Estonia.

Stari Brod is a village in Croatia. It is connected by the D36 highway.

Crveni Grm is a village in Bosnia and Herzegovina. According to the 1991 census, the village is located in the municipality of Ljubuški.

Bingley Glacier is a glacier 8 nautical miles (15 km) long in the Queen Alexandra Range, draining south from the slopes of Mount Kirkpatrick, Mount Dickerson and Barnes Peak and entering Beardmore Glacier just north of the Adams Mountains. It was named by Ernest Shackleton of the British Antarctic Expedition, 1907–09, after Bingley, England, the ancestral home of the Shackleton family.

Gundar is a river flowing in the Virudhunagar and Tirunelveli districts of the Indian state of Tamil Nadu.