HMS Blonde was a 46-gun modified Apollo-class fifth-rate frigate of 1,103 tons burthen. She undertook an important voyage to the Pacific Ocean in 1824. She was used for harbour service from 1850 and was renamed HMS Calypso in 1870, before being sold in 1895. [1]

Blonde was ordered on 11 December 1812 from Deptford Dockyard, to a new design developed from the lines of the Apollo class. She was laid down in March 1816, and was rated at 38 guns until February 1817. Blonde was launched on 12 January 1819, but was almost immediately laid up in ordinary at Greenhithe from between April 1819 and 1824, when she was completed and fitted for service at Woolwich. She cost a total of £38,266 to build, with a further £15,241 spent on fitting out.

Lord Byron (the 7th Baron, cousin of the famous poet George Gordon Byron) commanded her on an important voyage in 1824. Blonde departed Woolwich, England on 8 September 1824 with the bodies of King Kamehameha II and Queen Kamāmalu of the Kingdom of Hawaii who had died while trying to visit King George IV. The Hawaiian Islands had been named the "Sandwich Islands" in honor of John Montagu, 4th Earl of Sandwich who was the sponsor of the voyage of Captain James Cook in 1776–1779. The crew included James Macrae, Scottish botanist [2] sent by the Royal Horticultural Society, [3] and naturalist Andrew Bloxam whose brother Rowland was ship's chaplain. [4] Ship's artist Robert Dampier also made several important paintings on the voyage. [5]

On 27 November 1824 they arrived at Rio de Janeiro. From 24 December until 1 January 1825 they stayed at St. Catherines in Brazil, where the naturalist gathered some plants he thought might provide commercial crops in Hawaii. On 4 February 1825 they anchored at Valparaíso, Chile, where the Hawaiian Admiral Naihekukui (also known as "Kipihe") died suddenly. From 25 March to 3 April they stayed at the Galapagos Islands. On 1 May several Hawaiians, such as Kuini Liliha were baptised by the ship's chaplain. On 3 May land was first sighted off the island of Hawaii at Hilo. On 4 May they landed at Lahaina on the island of Maui where the Hawaiians disembarked. [3] :4

On 6 May they landed at Honolulu. A gardener named John Wilkinson had been brought from England to teach agriculture. Before they left England, Governor Boki had agreed to give some land to Wilkinson in the Mānoa Valley, although private ownership of land did not take hold until 1848 in Hawaii. The botanist Macrae left some coffee plants and others he had brought from Brazil. Unfortunately the climate did not agree with Wilkinson, who died in March 1827. [3] :34 Coffee would take many more years to become a successful crop (see also coffee production in Hawaii and Kona coffee).

On 11 May a state funeral was held for the late King and Queen, the first Christian memorial service for a ruler of Hawaii. The crew and many of the Hawaiian nobility attended. On 7 June Blonde sailed back past Maui to Hilo, where they had church services on 12 June. For a while Hilo Bay was called "Byron's Bay" by Europeans. American missionary Joseph Goodrich led a party in an attempt to climb Mauna Kea, the highest point for thousands of miles in any direction. On 15 June they took a canoe to Laupāhoehoe. Although Goodrich did not reach the snow-covered summit due to altitude sickness, a few of the party did on 17 June. [3] :48

On 25 June a party set out to visit the Kīlauea volcano. They arrived at the smoking crater with glowing red lava on 27 June. Lord Byron visited a few days later. [3] :64 On 7 July they left Hilo and returned to Honolulu by 9 July. On 12 July they left for Kealakekua Bay, arriving on 14 July, where they inspected the place of death of Captain James Cook in 1779. On 15–16 July they visited the royal tomb called Hale o Keawe at Puʻuhonua o Hōnaunau and removed most of the wooden carvings and other artefacts. Byron considered them "pagan symbols". [6] They constructed a post with copper plate as a monument to Captain Cook, and left on 18 July.

On 27 July they crossed the equator planning to go to Tahiti. The crew of Blonde are credited as the first Europeans to see Malden Island, named for navigator Lieutenant Charles Robert Malden on 30 July 1825. They landed on the island, however, and discovered remains of houses. On 1 August they passed Starbuck Island, and landed at Maʻuke in the Cook Islands on 8 August. On 6 September they reached Valparaíso, explored the coast of Chile, and rounded Cape Horn on 29 December. On 7 March 1826, they rescued survivors of Frances Mary and arrived back in England on 15 March. [3] :75

In 1826, Maria Graham published a book based on Rowland Bloxam's journal. [7] The Huntington Library in Southern California holds the original manuscript of Byron's log of the voyage to and from Hawaii in 1824 and 1825 (https://catalog.huntington.org/record=b1706285).

The first introduction of the top-level bureaucrats of the Ottoman Empire to the combination of fork and knife occurred at the ball that took place on the British ship Blonde in Istanbul after the war of 1828–29. [9]

Blonde became a receiving ship at Portsmouth in November 1850. In the 1861 Census she was at Portsmouth, attached to the royal yacht Osbourne, and listed as 'her hulk'. She was renamed HMS Calypso on 9 March 1870. She was sold at Portsmouth on 28 February 1895.

Charles Robert Malden, was a nineteenth-century British naval officer, surveyor and educator. He is the discoverer of Malden Island in the central Pacific, which is named in his honour. He also founded Windlesham House School at Brighton, England. 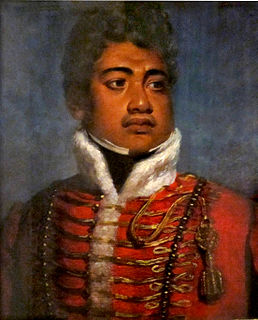 Kamehameha II was the second king of the Kingdom of Hawaii. His birth name was Liholiho and full name was Kalaninui kua Liholiho i ke kapu ʻIolani. It was lengthened to Kalani Kaleiʻaimoku o Kaiwikapu o Laʻamea i Kauikawekiu Ahilapalapa Kealiʻi Kauinamoku o Kahekili Kalaninui i Mamao ʻIolani i Ka Liholiho when he took the throne. 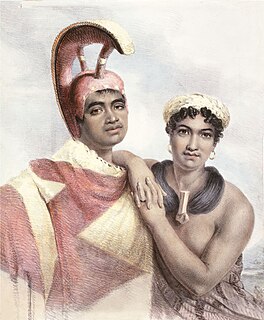 Kuini Liliha was a High Chiefess (aliʻi) and noblewoman who served the Kingdom of Hawaii as royal governor of Oʻahu island. She administered the island from 1829 to 1831 following the death of her husband Boki.

Mānoa is a valley and a residential neighborhood of Honolulu, Hawaiʻi. The neighborhood is approximately three miles east and inland from downtown Honolulu and less than a mile from Ala Moana and Waikiki at 21°18.87916′N157°48.4846′W. 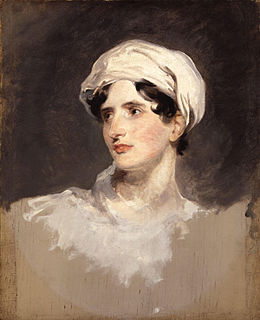 Puʻuhonua o Hōnaunau National Historical Park is a United States National Historical Park located on the west coast of the island of Hawaiʻi in the U.S. state of Hawaiʻi. The historical park preserves the site where, up until the early 19th century, Hawaiians who broke a kapu could avoid certain death by fleeing to this place of refuge or puʻuhonua. The offender would be absolved by a priest and freed to leave. Defeated warriors and non-combatants could also find refuge here during times of battle. The grounds just outside the Great Wall that encloses the puʻuhonua were home to several generations of powerful chiefs. 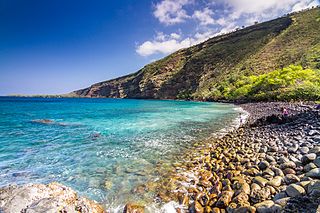 Kealakekua Bay is located on the Kona coast of the island of Hawaiʻi about 12 miles (19 km) south of Kailua-Kona. Settled over a thousand years ago, the surrounding area contains many archeological and historical sites such as religious temples (heiaus) and also includes the spot where the first documented European to reach the Hawaiian islands, Captain James Cook, was killed. It was listed in the National Register of Historic Places listings on the island of Hawaii in 1973 as the Kealakekua Bay Historical District. The bay is a marine life conservation district, a popular destination for kayaking, scuba diving, and snorkeling.

The Mauke starling or mysterious starling was a species of starling found on the island of Mauke, Cook Islands. It is now extinct. The binomen is the result of Buller's misreading of the name inornata on the specimen label. As he seems to have genuinely believed this spelling to be correct, the binomial, although it has no meaning, is valid. 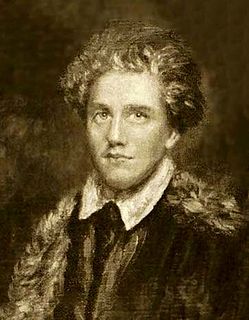 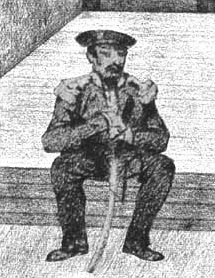 Don Francisco de Paula Marín (1774–1837) was a Spaniard who became influential in the early Kingdom of Hawaii. Often called Manini, Marini or other variations, he became a confidant of Hawaiian King Kamehameha I. Marín acted as a jack-of-all-trades, sometimes even acting as a physician, probably without any formal education, and is credited with introducing many agricultural products.

Boki was a High Chief in the ancient Hawaiian tradition and served the Kingdom of Hawaii as royal governor of the island of Oahu. Boki ran a mercantile and shipping business and encouraged the Hawaiians to gather sandalwood for trade.

Naihe-Kukui Kapihe, known as "Captain Jack" or "Jack the Pilot" to visitors, served as Honolulu harbor master and admiral of the royal fleet in the early Kingdom of Hawaii. His daughter would become a Queen consort. 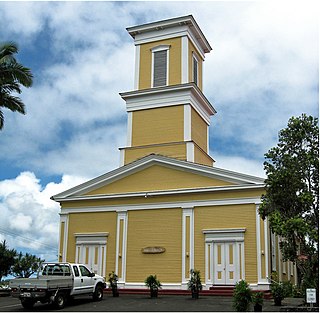 The Waiākea Mission Station was the first Christian mission on the eastern side of the Island of Hawaiʻi. Also known as the Hilo Station, the latest structure is now called Haili Church.

High Chiefess Kapiʻolani was an important member of the Hawaiian nobility at the time of the founding of the Kingdom of Hawaiʻi and the arrival of Christian missionaries. One of the first Hawaiians to read and write and sponsor a church, she made a dramatic display of her new faith which made her the subject of a poem by Alfred, Lord Tennyson.

Naihe was the chief orator and councilor during the founding of the Kingdom of Hawaii. A champion athlete in his youth, he negotiated for peace at several critical times and helped preserve the remains of several ancient leaders. 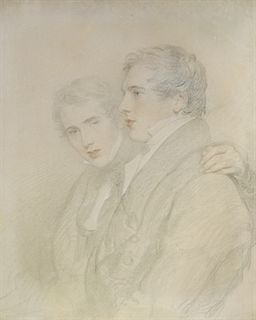 Andrew Bloxam was an English clergyman and naturalist; in his later life he had a particular interest in botany. He was the naturalist on board HMS Blonde during its voyage around South America and the Pacific in 1824–26, where he collected mainly birds. Later as a Church of England minister he lived in Warwickshire and Leicestershire and made significant contributions to the study of the natural history of the area. His special interest was in fungi and the genera Rubus and Rosa. His botanical author abbreviation is "A.Bloxam".

L'Aigle was launched in France in 1801, 1802, or 1803. The British Royal Navy captured her in 1809. From 1810 to 1817 she was a West Indiaman. From 1817 L'Aigle made four complete voyages as a whaler in the British Southern Whale fishery. On her third she carried King Kamehameha II of Hawaii, Queen Kamāmalu, and a number of their retainers and Hawaiian notables to England. She was lost on 6 March 1830 on her fifth whaling voyage.

James Macrae was a Scottish botanist.