Henry Rose (1675-1743) was an Irish politician and judge of the eighteenth century.

He was born at Morgans in County Limerick, younger son of George Rose of Morgans North, and grandson of Thomas Rose, who was Mayor of Limerick in 1695. Thomas had emigrated to Ireland from Devon in the late seventeenth century and acquired the Morgans estate. Henry was educated at Magdalen Hall, Oxford, entered the Inner Temple in 1696 and was called to the Irish Bar in 1701.

He sat in the Irish House of Commons for many years as member for Ardfert. He was considered one of the most effective Parliamentarians of his day, and almost always spoke and voted against the Government. Given his record of opposition his appointment as a justice of the Court of King's Bench (Ireland) in 1734 caused some surprise, although he had been counsel to the Revenue Commissioners since 1722. He probably owed the first appointment to his friendship with William Conolly, the long-serving Speaker of the Commons. He went regularly on assize in Munster, except in the famine year 1741, when a rampant fever made the journey too dangerous, and three of the few judges who braved the perils of the journey succumbed to a fatal illness. He died suddenly in 1743. In addition to his estate at Morgans he had a Dublin townhouse on Dominic Street.

He married Anne Crosbie, daughter of David Crosbie of County Kerry and Jane Hamilton, and sister of Maurice Crosbie, 1st Baron Brandon. She died in 1740. They had two children, George, who inherited Morgans, and Sarah. Sarah married as her first husband her cousin John Southwell of Enniscourt, County Limerick, only son of Richard Southwell MP and Agnes Rose, daughter of Henry's brother George, and had a daughter Agnes Elizabeth, who married John Wandesford, 1st Earl Wandesford. After Southwell's death Sarah remarried into the Talbot family of Mount Talbot, County Roscommon. 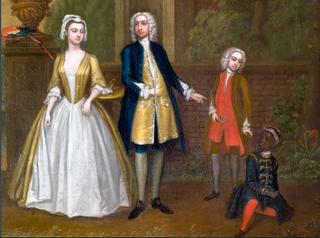 The High Sheriff of Kerry was the British Crown's judicial representative in County Kerry, Ireland from the 16th century until 1922, when the office was abolished in the new Free State and replaced by the office of Kerry County Sheriff. The sheriff had judicial, electoral, ceremonial and administrative functions and executed High Court Writs. In 1908, an Order in Council made the Lord-Lieutenant the Sovereign's prime representative in a county and reduced the High Sheriff's precedence. However the sheriff retained his responsibilities for the preservation of law and order in the county. The usual procedure for appointing the sheriff from 1660 onwards was that three persons were nominated at the beginning of each year from the county and the Lord Lieutenant then appointed his choice as High Sheriff for the remainder of the year. Often the other nominees were appointed as under-sheriffs. Sometimes a sheriff did not fulfil his entire term through death or other event and another sheriff was then appointed for the remainder of the year. The dates given hereunder are the dates of appointment. All addresses are in County Kerry unless stated otherwise.

Sir Henry Hartstonge, 3rd Baronet was an Anglo-Irish politician and landowner, a member of the English ruling class that controlled Ireland, who sat in the Irish House of Commons as member for Limerick County. He was a close political associate of his influential brother-in-law Edmund Pery, 1st Viscount Pery. He gave his name to Hartstonge Street, Limerick.

Maurice Coppinger was an Irish barrister and politician, who sat in the Irish House of Commons for many years, and held the office of King's Serjeant. His name is commemorated in Coppinger Row, a side street in central Dublin city; his town house was on South William Street nearby.