Hero of the Mongolian People's Republic 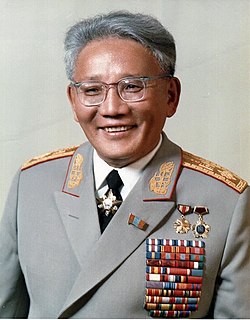 Yumjaagiin Tsedenbal was the leader of the Mongolian People's Republic from 1940 to 1984. During his political life, he served as Chairman of the Presidium of the People's Great Khural, Prime Minister of Mongolia and General Secretary of the Mongolian People's Revolutionary Party. He was the longest-serving leader of any Eastern Bloc country, serving over 44 years in office until his expulsion in August 1984.

The Mongolian People's Party is the oldest political party in Mongolia.

Khorloogiin Choibalsan (Mongolian: Хорлоогийн Чойбалсан, spelled Koroloogiin Çoibalsan between 1931 and 1941 and before 1931, was the leader of Mongolia and Marshal of the Mongolian People's Army from the 1930s until his death in 1952. His rule marked the first and last time in modern Mongolian history that an individual had complete political power. Sometimes referred to as the Stalin of Mongolia, Choibalsan oversaw Soviet-ordered purges in the late 1930s that resulted in the deaths of an estimated 30,000 to 35,000 Mongolians. Most of the victims were Buddhist clergy, intelligentsia, political dissidents, ethnic Buryats and Kazakhs and others perceived as "enemies of the revolution." His intense persecution of Mongolia's Buddhist monks resulted in the near-eradication of a clergy class that had numbered over 100,000 monks ; by 2000, only 200-300 monks live in Mongolia, though a majority of the population continue to identify as Buddhist. 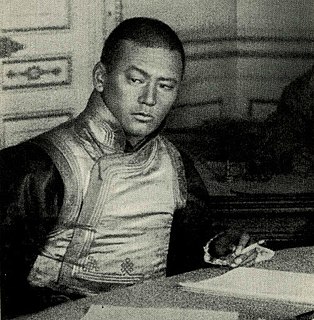 Jügderdemidiin Gürragchaa was the first Mongolian in space. He also was Mongolia's Defense Minister from 2000–04.

Sükhbaatar's Mausoleum was a mausoleum for Damdin Sükhbaatar, leader of Mongolia's 1921 revolution, and Khorloogiin Choibalsan, head of Mongolia's government from the late 1930s to his death in 1952, in Mongolia's capital Ulaanbaatar, on the northern side of Sükhbaatar Square in front of the Saaral Ordon. The building was erected after Choibalsan's death, and removed in 2005 to make place for a hall dedicated to Genghis Khan. The mausoleum resembled the shape of Lenin's Mausoleum but differed in color. The mausoleum has never been opened for public visits.

The Jalkhanz Khutagt Sodnomyn Damdinbazar was a high Buddhist incarnation from northwestern Mongolia who played a prominent role in the country's independence movement in 1911–1912. He served as Prime Minister twice; first in 1921 as part of the Bogd Khan puppet government established by Roman von Ungern-Sternberg, and again from 1922 to 1923 under the revolutionary government of the Mongolian People's Party. 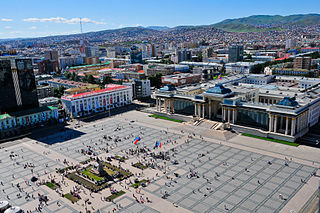 Sükhbaatar Square is the central square of Mongolia's capital Ulaanbaatar. The square was named for Mongolian's revolutionary hero Damdin Sükhbaatar shortly after his death in 1923. The square's name was changed to Chinggis Square in 2013 in honor of Genghis Khan, considered the founding father of Mongolia, but the original name was restored in 2016. The center of the plaza features an equestrian statue of Damdin Sükhbaatar, while a large colonnade monument dedicated to Genghis Khan, as well as to Ögedei Khan and Kublai Khan, dominates the square's north face directly in front of the Saaral Ordon.

The Stalinist repressions in Mongolia refers to an 18 month period of heightened political violence and persecution in the Mongolian People's Republic between 1937 and 1939. The repressions were an extension of the Stalinist purges unfolding across the Soviet Union around the same time. Soviet NKVD advisors, under the nominal direction of Mongolia's de facto leader Khorloogiin Choibalsan, persecuted thousands of individuals and organizations perceived as threats to the Mongolian revolution and the growing Soviet influence in the country. As in the Soviet Union, methods of repression included torture, show trials, executions, and imprisonment in remote forced labor camps, often in Soviet gulags. Estimates differ, but anywhere between 20,000 and 35,000 "enemies of the revolution" were executed, a figure representing three to five percent of Mongolia's total population at the time. Victims included those accused of espousing Tibetan Buddhism, pan-Mongolist nationalism, and pro-Japanese sentiment. Buddhist clergy, aristocrats, intelligentsia, political dissidents, and ethnic Buryats and Kazakhs suffered the greatest losses.

Khatanbaatar Magsarjav was a Mongolian general and a leading figure in Mongolia's struggle for independence. His contingent of 800 elite Mongol soldiers fought White Russian and Chinese forces over 30 times between 1912 and 1921, without a single defeat. He served as acting prime minister from February 15, 1921 to March 13, 1921, under Roman Ungern von Sternberg's puppet regime and then later as minister of the army in the 1920s. He received the additional title Ardyn Khatanbaatar Magsarjav in 1924.

The Order of Sukhbaatar is a state decoration of Mongolia, originally instituted on 16 May 1941. It was awarded to Mongolians and foreigners "for special services to defenses, economic and cultural construction of the Mongolian People's Republic, and also for acts of heroism in the struggle against external and internal enemies". It was named after the Mongolian national hero, Damdin Sükhbaatar. It is still conferred today.

Dashiin Damba was a Mongolian politician who was elected General Secretary of the Mongolian People’s Revolutionary Party (MPRP) in 1954. He was ousted from office in 1958 and banished to internal exile a year later for his strong backing of de-Stalinization policies against the wishes of Mongolia’s Prime Minister Yumjaagiin Tsedenbal.

Banzarjavyn Baasanjav was leader of the Mongolian People's Revolutionary Party from 1936 to 1940. Prime Minister Khorloogiin Choibalsan arranged for his arrest and subsequent execution on charges of counterrevolution in 1940 to free up the party leadership role for Yumjaagiin Tsedenbal.

Sonomyn Luvsan was a prominent Mongolian politician and diplomat who was acting Chairman of the Presidium of the People's Great Khural of the Mongolian People's Republic or MPR from June 29, 1972 to June 11, 1974.

Sambadondogiin Tserendorj was recognized as the 6th reincarnate of the Donkor-Manjushri Gegen. He served as chief abbot of the Manjusri Monastery and later was the last acting prime minister of Outer Mongolia during Baron Ungern von Sternberg's occupation of Ikh Khŭree from May to July 1921. Later accused of counterrevolution, he was executed in 1937 at the start of the Stalinist purges in Mongolia (1937–1939).

The Altan-Ölgii National Cemetery is a cemetery located in Ulaanbaatar, Mongolia. 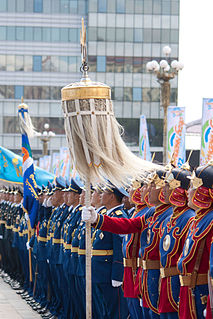 State Flag Day is the main state holiday in Mongolia, being celebrated annually on July 10. State Flag Day is celebrated with a central government-sponsored events including a military parade and a flag raising ceremony on Sükhbaatar Square in the capital of Ulaanbaatar.