An indenture is a legal contract that reflects or covers a debt or purchase obligation. It specifically refers to two types of practices: in historical usage, an indentured servant status, and in modern usage, it is an instrument used for commercial debt or real estate transaction.

An indenture is a legal contract between two parties, particularly for indentured labour or a term of apprenticeship but also for certain land transactions. The term comes from the medieval English "indenture of retainer" [1] — a legal contract written in duplicate on the same sheet, with the copies separated by cutting along a jagged (toothed, hence the term "indenture") line so that the teeth of the two parts could later be refitted to confirm authenticity (chirograph). [2] Each party to the deed would then retain a part. When the agreement was made before a court of law a tripartite indenture was made, with the third piece kept at the court. The term is used for any kind of deed executed by more than one party, in contrast to a deed poll which is made by one individual. In the case of bonds, the indenture shows the pledge, promises, representations and covenants of the issuing party.

Although other evidence indicates that the method has been in use from around the year 1000, the earliest surviving examples in England are from the thirteenth century. These are agreements for military service, proving that a paid contract army was then in existence. [1] Exchequer records of Henry V's French campaign of 1415, which culminated in the Battle of Agincourt on 25 October 1415, including the indentures of all the captains of the army agreeing to provide specified numbers of men and at what cost, may still be read. [3] An indenture was commonly used as a form of sealed contract or agreement for land and buildings. An example of such a use can be found in the National Archives, where an indenture, from about 1401, recording the transfer of the manor of Pinley, Warwickshire, is held. [4]

In the early history of the United States, many European immigrants served a period of indentured labour in order to pay the cost of their transportation. This practice was common during the 17th and 18th centuries, where over half of immigrants worked off an average of three years' servitude.

Bond indenture (also trust indenture or deed of trust) is a legal document issued to lenders and describes key terms such as the interest rate, maturity date, convertibility, pledge, promises, representations, covenants, and other terms of the bond offering. When the offering memorandum is prepared in advance of marketing a bond, the indenture will typically be summarised in the "description of notes" section.

In the United States, public debt offerings in excess of $10 million require the use of an indenture of trust under the Trust Indenture Act of 1939. The rationale for this is that it is necessary to establish a collective action mechanism under which creditors can collect in a fair, orderly manner if default takes place (like that which occurs during bankruptcy). [5] No trust relationship exists between the bondholder and the issuing corporation. These two are in a regular contractual, arm's length, non-fiduciary, non-equity relationship. Rather, the trustee in a "trust indenture" is a third party, usually a specialist company, who is appointed by the issuer to handle and safeguard the interests of the numerous public bondholders, in events ranging from the usual distribution of coupons and principal payments to dealing with the issuer's default, if any occurs.

A municipal bond, commonly known as a muni bond, is a bond issued by a local government or territory, or one of their agencies. It is generally used to finance public projects such as roads, schools, airports and seaports, and infrastructure-related repairs. The term municipal bond is commonly used in the United States, which has the largest market of such trade-able securities in the world. As of 2011, the municipal bond market was valued at $3.7 trillion. Potential issuers of municipal bonds include states, cities, counties, redevelopment agencies, special-purpose districts, school districts, public utility districts, publicly owned airports and seaports, and other governmental entities at or below the state level having more than a de minimis amount of one of the three sovereign powers: the power of taxation, the power of eminent domain or the police power.

In common law, a deed is any legal instrument in writing which passes, affirms or confirms an interest, right, or property and that is signed, attested, delivered, and in some jurisdictions, sealed. It is commonly associated with transferring (conveyancing) title to property. The deed has a greater presumption of validity and is less rebuttable than an instrument signed by the party to the deed. A deed can be unilateral or bilateral. Deeds include conveyances, commissions, licenses, patents, diplomas, and conditionally powers of attorney if executed as deeds. The deed is the modern descendant of the medieval charter, and delivery is thought to symbolically replace the ancient ceremony of livery of seisin.

Fixed income refers to any type of investment under which the borrower or issuer is obliged to make payments of a fixed amount on a fixed schedule. For example, the borrower may have to pay interest at a fixed rate once a year and repay the principal amount on maturity. Fixed-income securities can be contrasted with equity securities – often referred to as stocks and shares – that create no obligation to pay dividends or any other form of income.

A debtor or debitor is a legal entity that owes a debt to another entity. The entity may be an individual, a firm, a government, a company or other legal person. The counterparty is called a creditor. When the counterpart of this debt arrangement is a bank, the debtor is more often referred to as a borrower.

The Trust Indenture Act of 1939 (TIA), codified at 15 U.S.C. §§ 77aaa–77bbbb, supplements the Securities Act of 1933 in the case of the distribution of debt securities in the United States. Generally speaking, the TIA requires the appointment of a suitably independent and qualified trustee to act for the benefit of the holders of the securities, and specifies various substantive provisions for the trust indenture that must be entered into by the issuer and the trustee. The TIA is administered by the US Securities and Exchange Commission (SEC), which has made various regulations under the act.

In finance, a surety, surety bond or guaranty involves a promise by one party to assume responsibility for the debt obligation of a borrower if that borrower defaults. Usually, a surety bond or surety is a promise by a surety or guarantor to pay one party a certain amount if a second party fails to meet some obligation, such as fulfilling the terms of a contract. The surety bond protects the obligee against losses resulting from the principal's failure to meet the obligation. The person or company providing the promise is also known as a "surety" or as a "guarantor".

A corporate bond is a bond issued by a corporation in order to raise financing for a variety of reasons such as to ongoing operations, M&A, or to expand business. The term is usually applied to longer-term debt instruments, with maturity of at least one year. Corporate debt instruments with maturity shorter than one year are referred to as commercial paper. 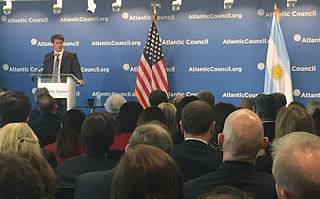 The Argentine debt restructuring is a process of debt restructuring by Argentina that began on January 14, 2005, and allowed it to resume payment on 76% of the US$82 billion in sovereign bonds that defaulted in 2001 at the depth of the worst economic crisis in the nation's history. A second debt restructuring in 2010 brought the percentage of bonds under some form of repayment to 93%, though ongoing disputes with holdouts remained. Bondholders who participated in the restructuring settled for repayments of around 30% of face value and deferred payment terms, and began to be paid punctually; the value of their nearly worthless bonds also began to rise. The remaining 7% of bondholders were later repaid in full, after centre-right and US-aligned leader Mauricio Macri came to power in 2015.

Project finance is the long-term financing of infrastructure and industrial projects based upon the projected cash flows of the project rather than the balance sheets of its sponsors. Usually, a project financing structure involves a number of equity investors, known as 'sponsors', and a 'syndicate' of banks or other lending institutions that provide loans to the operation. They are most commonly non-recourse loans, which are secured by the project assets and paid entirely from project cash flow, rather than from the general assets or creditworthiness of the project sponsors, a decision in part supported by financial modeling; see Project finance model. The financing is typically secured by all of the project assets, including the revenue-producing contracts. Project lenders are given a lien on all of these assets and are able to assume control of a project if the project company has difficulties complying with the loan terms.

In the most basic sense of the term, A corporate trust is a trust created by a corporation. 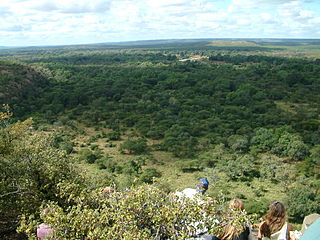 South African property law regulates the "rights of people in or over certain objects or things." It is concerned, in other words, with a person's ability to undertake certain actions with certain kinds of objects in accordance with South African law. Among the formal functions of South African property law is the harmonisation of individual interests in property,the guarantee and protection of individual rights with respect to property, and the control of proprietary relationships between persons, as well as their rights and obligations. The protective clause for property rights in the Constitution of South Africa stipulates those proprietary relationships which qualify for constitutional protection. The most important social function of property law in South Africa is to manage the competing interests of those who acquire property rights and interests. In recent times, restrictions on the use of and trade in private property have been on the rise.

A penal bond is a written instrument executed between an obligor and an obligee designed to secure the performance of a legal obligation through the in terrorem effect of the threat of a penalty for nonperformance.