The initial condition of a vibrating string

Evolution from the initial condition

In mathematics and particularly in dynamic systems, an initial condition, in some contexts called a seed value, [1] :pp. 160 is a value of an evolving variable at some point in time designated as the initial time (typically denoted t = 0). For a system of order k (the number of time lags in discrete time, or the order of the largest derivative in continuous time) and dimension n (that is, with n different evolving variables, which together can be denoted by an n-dimensional coordinate vector), generally nk initial conditions are needed in order to trace the system's variables forward through time.

In both differential equations in continuous time and difference equations in discrete time, initial conditions affect the value of the dynamic variables (state variables) at any future time. In continuous time, the problem of finding a closed form solution for the state variables as a function of time and of the initial conditions is called the initial value problem. A corresponding problem exists for discrete time situations. While a closed form solution is not always possible to obtain, future values of a discrete time system can be found by iterating forward one time period per iteration, though rounding error may make this impractical over long horizons.

predicated on the vector

of initial conditions on the individual variables that are stacked into the vector;

Alternatively, a dynamic process in a single variable x having multiple time lags is

Here the dimension is n = 1 and the order is k, so the necessary number of initial conditions to trace the system through time, either iteratively or via closed form solution, is nk = k. Again the initial conditions do not affect the qualitative nature of the variable's long-term evolution. The solution of this equation is found by using its characteristic equation

to obtain the latter's k solutions, which are the characteristic values

for use in the solution equation

are found by solving a system of k different equations based on this equation, each using one of k different values of t for which the specific initial condition

. The number of required initial pieces of information is the dimension n of the system times the order k = 1 of the system, or n. The initial conditions do not affect the qualitative behavior (stable or unstable) of the system.

Here the number of initial conditions necessary for obtaining a closed form solution is the dimension n = 1 times the order k, or simply k. In this case the k initial pieces of information will typically not be different values of the variable x at different points in time, but rather the values of x and its first k – 1 derivatives, all at some point in time such as time zero. The initial conditions do not affect the qualitative nature of the system's behavior. The characteristic equation of this dynamic equation is

whose solutions are the characteristic values

these are used in the solution equation

given the known initial conditions on x and its k – 1 derivatives' values at some time t. Evolution of this initial condition for an example PDE

Nonlinear systems can exhibit a substantially richer variety of behavior than linear systems can. In particular, the initial conditions can affect whether the system diverges to infinity or whether it converges to one or another attractor of the system. Each attractor, a (possibly disconnected) region of values that some dynamic paths approach but never leave, has a (possibly disconnected) basin of attraction such that state variables with initial conditions in that basin (and nowhere else) will evolve toward that attractor. Even nearby initial conditions could be in basins of attraction of different attractors (see for example Newton's method#Basins of attraction).

Moreover, in those nonlinear systems showing chaotic behavior, the evolution of the variables exhibits sensitive dependence on initial conditions: the iterated values of any two very nearby points on the same strange attractor, while each remaining on the attractor, will diverge from each other over time. Thus even on a single attractor the precise values of the initial conditions make a substantial difference for the future positions of the iterates. This feature makes accurate simulation of future values difficult, and impossible over long horizons, because stating the initial conditions with exact precision is seldom possible and because rounding error is inevitable after even only a few iterations from an exact initial condition.

In mathematics, a recurrence relation is an equation that recursively defines a sequence or multidimensional array of values, once one or more initial terms are given; each further term of the sequence or array is defined as a function of the preceding terms.

In mathematics, the Lyapunov exponent or Lyapunov characteristic exponent of a dynamical system is a quantity that characterizes the rate of separation of infinitesimally close trajectories. Quantitatively, two trajectories in phase space with initial separation vector diverge at a rate given by

In mathematics, a stiff equation is a differential equation for which certain numerical methods for solving the equation are numerically unstable, unless the step size is taken to be extremely small. It has proven difficult to formulate a precise definition of stiffness, but the main idea is that the equation includes some terms that can lead to rapid variation in the solution.

In applied mathematics, in particular the context of nonlinear system analysis, a phase plane is a visual display of certain characteristics of certain kinds of differential equations; a coordinate plane with axes being the values of the two state variables, say, or etc.. It is a two-dimensional case of the general n-dimensional phase space.

In numerical linear algebra, the method of successive over-relaxation (SOR) is a variant of the Gauss–Seidel method for solving a linear system of equations, resulting in faster convergence. A similar method can be used for any slowly converging iterative process. 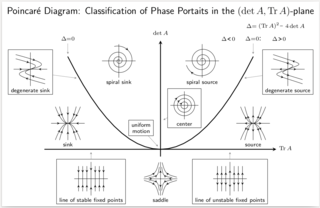 Numerical continuation is a method of computing approximate solutions of a system of parameterized nonlinear equations,

In mathematics and in particular dynamical systems, a linear difference equation or linear recurrence relation sets equal to 0 a polynomial that is linear in the various iterates of a variable—that is, in the values of the elements of a sequence. The polynomial's linearity means that each of its terms has degree 0 or 1. Usually the context is the evolution of some variable over time, with the current time period or discrete moment in time denoted as t, one period earlier denoted as t − 1, one period later as t + 1, etc.