Isabelle Mireille Mambingo Mambingo (born 10 April 1985) is a Cameroonian footballer who plays as a goalkeeper for AS Green City and the Cameroon women's national team.

Mambingo played for Cameroon at senior level in the 2015 African Games. [4]

The Confederation of African Football, or CAF for short, is the administrative and controlling body for association football, futsal and beach soccer in Africa. It was established on 8 February 1957 at the Grand Hotel in Khartoum, Sudan by the national football associations of Egypt, Ethiopia, South Africa and Sudan, following formal discussions between the aforementioned associations at the FIFA Congress held on 7 June 1956 at Avenida Hotel in Lisbon, Portugal.

The Morocco national football team, nicknamed "the Atlas Lions", represents Morocco in men's international football competitions. It is controlled by the Royal Moroccan Football Federation, also known as FRMF. The team's colours are red and green. The team is a member of both FIFA and the Confederation of African Football (CAF).

The Gambia national football team represents The Gambia in men's international football and is controlled by the Gambia Football Federation. Until 1965, the team and the country were known as British Gambia. The team has never qualified for the World Cup. In 2021, Gambia qualified for the Africa Cup of Nations finals for the first time in history. The team represents both FIFA and Confederation of African Football (CAF).

The African Nations Championship, known as the TotalEnergies African Nations Championship for sponsorship purposes, is a biennial African national association football tournament organized by the Confederation of African Football (CAF) and first announced on 11 September 2007. The participating nations must consist of players playing in their national league competitions.

The DR Congo women's national football team represents the Democratic Republic of the Congo in international women's football. It is governed by the Congolese Association Football Federation. FIFA refers to DR Congo as Congo DR. 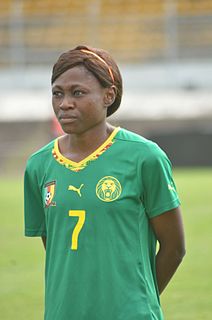 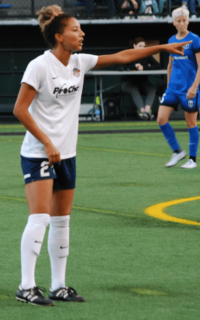 Firmin Ndombe Mubele is a Congolese professional footballer who plays for the Democratic Republic of the Congo national football team. He plays as a winger, while also being capable of filling the role of a striker. 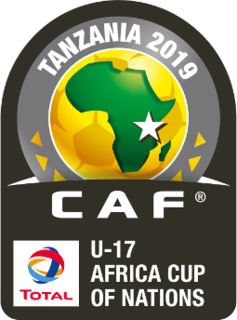 Alvine Emma Njolle Ngonja is a Cameroonian footballer who plays as a defender for Belarusian club FC Minsk and the Cameroon women's national team.

Brigitte Omboudou is a Cameroonian footballer who plays as a midfielder for Amazone FAP and the Cameroon women's national team.

Oliver Amani Mbekeka is a Ugandan football manager and former player who played as a forward. She has been a member of the Uganda women's national team.